Heo Yun Jin And Lee Ga Eun Talk About Their Close Bond, Hopes For The Future, And More

Lee Ga Eun and Heo Yun Jin, affectionately known as kirins (giraffes) by fans, recently sat down for an interview to talk about what they’ve been up to and where they hope to be heading in the future.

The two stole the hearts of many during their time as contestants from Pledis Entertainment on Mnet’s “Produce 48” and have since been busy with various activities, filming video content and appearing at events.

The two of them became very close during the show, with Lee Ga Eun saying, “I never thought of Yun Jin as a competitor. All I wanted was for us to both do our best till the end and debut together. This didn’t air during the show, but I received an A grade and Yun Jin received a C grade during our evaluations. I thought she’d get a B, so after our stage, I told her, ‘You did well. I hope to see you in the A class,’ and we hugged and cried.” Yun Jin added, “I never thought that I had to beat Ga Eun. If she did well, it made me happy and if she ever made a mistake, I’d feel sad with her. We comforted each other and that’s how we got through it.”

Though they stuck together for their journey on “Produce 48,” Lee Ga Eun and Heo Yun Jin had very different starting points. Lee Ga Eun explained, “I’m someone who’s scared of trying new things. So when I applied, I thought, ‘Should I put myself out there when I’m still so lacking?’ and I wondered if it was right for me to appear on the show when I’d already debuted as a member of After School. But I felt like that [‘Produce 48’] was going to be my last shot to stand on stage. I closed my eyes and told myself that this was it. Even if I was eliminated halfway through, I’d at least be able to remember when my last stage was.”

Heo Yun Jin shared her story of how “Produce 48” was a place to make her debut dreams come true and a place for her to grow. She said, “I was born in Korea but I moved to New York when I was eight months old and lived there till early this year. It wasn’t long after my audition [with Pledis Entertainment] that I appeared on the show. When I was little, I was made fun of for my name and I faced a lot of racism, and what gave me strength during those times was K-pop. Listening to K-pop helped me think about what I like and what I want to express. Now, I want to be an artist who gives strength to people.” 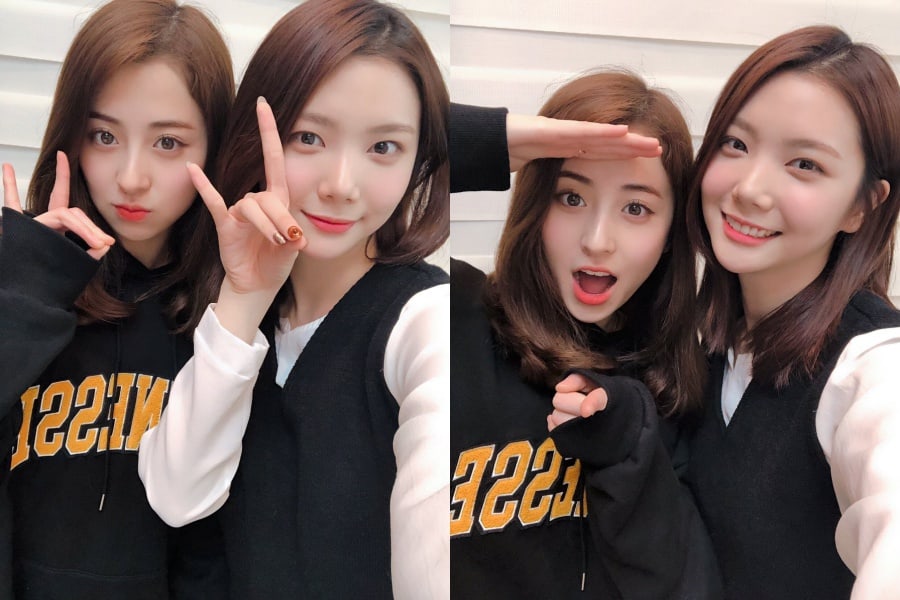 It’s been less than a year since they’ve met but Lee Ga Eun and Heo Yun Jin said that they’re lucky to have each other. They also have many things they want to accomplish together. Lee Ga Eun said she’d like to visit Heo Yun Jin’s house in the U.S. or even meet real giraffes together, staying true to their kirins nickname. Heo Yun Jin said she’d like for them to cook a meal or film a mukbang (eating broadcast) together as well.

With these small goals in mind, Lee Ga Eun and Heo Yun Jin’s most important goal is to get back on stage. Heo Yun Jin said, “Through my experience [on ‘Produce 48], I’ve learned that the rehearsal studio and the stage are two completely different things. If I work hard in the rehearsal studio, I sometimes discover a new side of myself on stage. So I want to return to the stage. The concept doesn’t matter because I want to try everything. I hope there will come a day when I get to do a great dance break on stage.”

Lee Ga Eun said, “When I was on hiatus, I’d sometimes tell myself ‘I’ve already debuted once, so it’s okay,’ or ‘If this doesn’t work, I can find something else to do,’ but I’ve learned to love the stage again. I’ve come to realize that my love for the stage comes from seeing the audience in front of me rather than from being able to showcase my talents. The stage is the only place I can receive so many love from so many people. We don’t have any concrete details or plans, but we hope to find the best possible solution and greet people more often as kirins. That’s the mindset we have as we train together.”