Based on the webtoon of the same name, “Feel Good to Die” tells the story of evil boss Baek Jin Sang (played by Kang Ji Hwan) and assistant manager Lee Ruda (played by Baek Jin Hee) who tries to change him into a better person.

In the November 14 broadcast of the drama, Lee Ruda revealed the true nature of the time loop affecting Baek Jin Sang when she told him, “If you are cursed by someone, then you will die, and that day will loop continuously.” However, Baek Jin Sang pretended that he hadn’t heard anything and instead ignored Lee Ruda while regarding her as a strange person. Because Lee Ruda is the only one who notices Baek Jin Sang’s time loop, she is constantly getting into sad, but amusing situations as she comes to control his life.

In the released photos, Baek Jin Sang wears an expression of pain, as if he is experiencing an excruciating headache. This clues viewers in on the unusual occurrences that Baek Jin Sang will eventually come across. 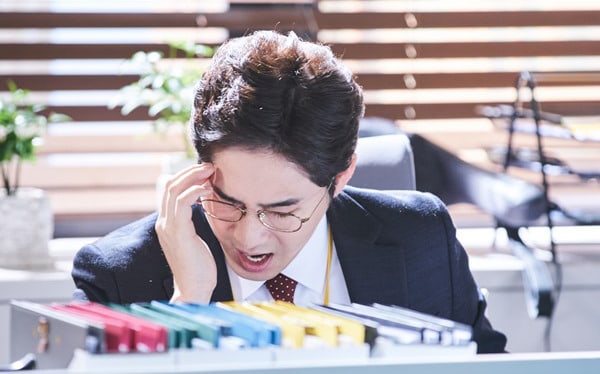 You can watch the latest episode of “Feel Good to Die” below:

Kang Ji Hwan
Feel Good to Die
How does this article make you feel?