On November 17, the couple shared their thoughts at a press conference before their wedding.

Kim Min Ki began, “I have the mindset of starting again as day one after today.” Hong Yoon Hwa added, “When we first began dating, I didn’t have thoughts about marriage, but this moment came so quickly. I’m excited that we’ll wake up as husband and wife starting tomorrow morning. We saw each other every day, but it seems different now.”

About their night before the wedding, Kim Min Ki said, “I slept better than I thought and woke up with a happy mind. I was happy all day today.” Hong Yoon Hwa revealed, “I had such a good dream. I wondered if I should buy a lottery ticket, but I didn’t buy a lottery ticket and decided to leave today up to luck.”

The two comedians met on SBS’s “People Looking for a Laugh” (literal title). They dated for almost nine years since April 2010 and confirmed their relationship to the public in 2011. “Our relationship was announced to many people not long after we began dating,” said Hong Yoon Hwa. “Many people around us congratulated us and supported us, so I was thankful. News about our wedding was also publicized quickly. There were people who thought we were married this entire year.”

She continued, “I’m thankful that many people were interested after the articles were quickly published. From here on out, we will become two people who have a good, happy influence. I also received a lot of direct messages from people I don’t know on social media. Thank you so much.” 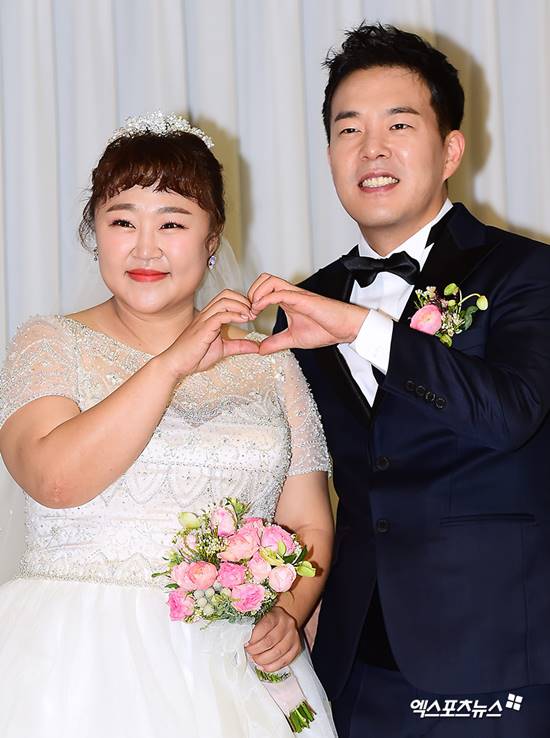 It became a hot topic that Hong Yoon Hwa lost 30 kilograms (approximately 66 pounds) for her wedding. She commented, ” I tried to lose weight according to my dress, but it was difficult to stop myself from eating what I wanted to eat. Dieting was really hard. I couldn’t eat delicious food, watched what I ate, and exercised over four times a week. I received stress, but I got a physical examination and my body became healthier. When I open my eyes in the morning, my body feels lighter, and I feel refreshed. I felt more comfortable when sleeping, so it feels like I became healthier.”

The couple also shared the behind-the-scenes story of their proposal. Kim Min Ki said, “After the wedding dress fitting, I prepared an event at a café. Both of us were in a sea of tears.” Hong Yoon Hwa explained, “I was going to do a special event that day so I asked my friends for help and prepared event supplies. I saw many people propose with a home party and it looked pretty, so I did that. But he ended up doing [an event] in the morning, and I did one in the afternoon. We had no idea.”

When asked about their family plans, Hong Yoon Hwa replied, “We haven’t decided yet. If we have kids, we’ll be happy. If not, then the two of us will live together. For now, we don’t have plans for children.” Kim Min Ki elaborated, “Instead of planning for children, we want to have time amongst ourselves for the time being. We lived apart until now, so we want to enjoy our honeymoon and then think about our future plans afterward.” 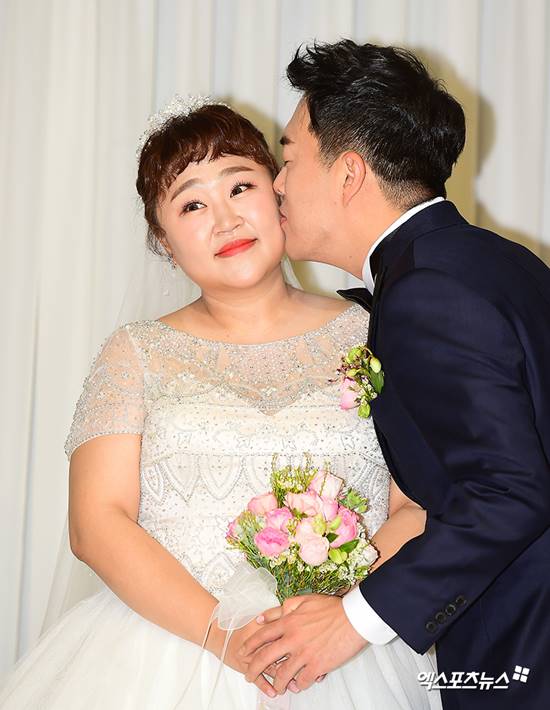 He concluded, “I want to become a trustworthy husband. I will try my best everyday for happiness. I am confident we’ll live happily. I won’t disappoint her and we will be happy until we die.” Hong Yoon Hwa stated, “I’ll become a wife who’s lovelier than yesterday and a sensible wife who works hard. We may fight and have issues, but we’ll live happily.”

Kim Min Ki and Hong Yoon Hwa got married on November 17 at 6 p.m. KST at a wedding ceremony without an officiant. Yang Se Hyung was the host for the first half and Kim Young for the second half of the ceremony. Flower’s Ko Yoo Jin and V.O.S’s Kim Kyung Rok sang the congratulatory song at the wedding. The couple will head to Hawaii at the end of December for a honeymoon and live together in the neighborhood of Mangwon in Seoul.