On November 16, SBS’s “Village Survival, the Eight” premiered its first episode. The PD shared behind-the-scenes stories and points to look out for in a phone interview with OSEN.

In the first episode, the stars bickered, ran around to gather hints to solve a mystery worth 10 million won (approximately $8,917), and tricked one another. The cast includes Yoo Jae Suk, Jang Do Yeon, Yang Se Hyung, Kang Ki Young, Yang Se Hyung, and BLACKPINK’s Jennie.

He continued, “It is in a timeslot that starts a bit later than MBC’s ‘I Live Alone,’ so I was honestly quite worried. Although the viewership ratings weren’t high, the buzz ratings were high so I think it’s good. I don’t know if the high amount of buzz will lead to viewership ratings yet, but I feel like the content will be consumed well. The remaining episodes are more fun. As the members get closer with one another, funnier episodes will come out.”

Describing the charms of his show, the PD stated, “Since observing reality shows are popular, I thought that the variety show industry needs more various genres. I wanted to give off traditional variety show vibes. That, plus the word ‘village’ is usually used for healing, so I thought about portraying this in a new way. That’s how I got to make ‘Village Survival, the Eight.’ All of the members who gathered worked hard with sincerity. It is an obvious thing to say, but we don’t have a script. We planned the missions with the thought, ‘If we do a mission at this kind of place, then they’ll find a hint.’ The scenes where the members find hints are real without a script. Since a big prize is on the line, we really can’t plan it.” 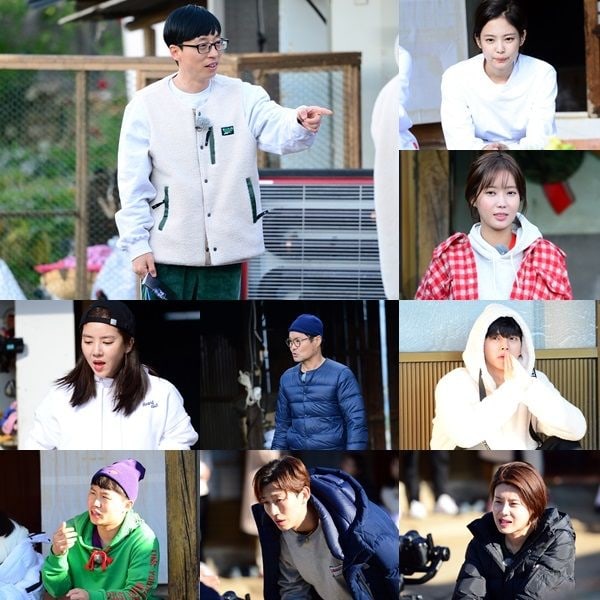 When the interviewer brought up how viewers said that Yoo Jae Suk played a large role as expected, the PD replied, “In this program, many non-variety show celebrities appear. So I thought that it would be nice if someone could bring out their fun charms and lead them. I talked with Yoo Jae Suk a lot and communicated with him from the beginning. If a game didn’t go well, then I discussed it with Yoo Jae Suk and changed it on the spot. I discussed with Yoo Jae Suk while proceeding [with the show].”

“Jennie is really funny,” said the PD with a laugh. “Contrary to the charisma she shows on stage, she is a shy person who has girlish, baby-like charms. As Jennie gets more comfortable with each episode, she brings out more fun and enjoys it even more. The members also adored this innocent Jennie. Jennie will get funnier as the episodes continue.”

The interviewer also told the PD that many viewers are commenting that this show reminds them of “Family Outing.” Jung Chul Min replied, “This is a program that began from a conversation with Yoo Jae Suk where we said, ”Family Outing’ was really fun, right?’ I knew that ‘Family Outing’ would come up as soon as I went to a village with Yoo Jae Suk, but it’s definitely different.”

He added, “There are investigative aspects and the editing process is different compared to ‘Family Outing.’ More than anything, it’s probably due to the déjà vu that comes from the traditional variety show genre. It will be difficult to say that we’re a completely different program, but you’ll be able to feel the charms of a traditional variety show as well as things similar to ‘Family Outing’ and a thriller.”

As for things to watch out for in future episodes, PD Jung Chul Min said, “I made this hoping that it will be fun. I made this into a six-episode pilot because I wanted to create a format where people who miss the generation of traditional variety shows can see it. I can’t say that I’m certain of regular programming just yet, but I think if you continue watching it with love, then there may be potential. I’m certain that it will get more fun as it continues. Please look forward to ‘Village Survival, the Eight’ which will get more fun from here on out.”