“Dokgo Rewind” was another one of the most highly anticipated webtoon dramas, what with its stellar cast of idol and up-and-coming actors. Featuring the likes of EXO’s Sehun and gugudan’s Mina, the drama delivers much excitement and adrenaline with cool fight scenes that even Jang Hyuk would be proud of.

As the prequel to “Dokgo,” “Dokgo Rewind” begins one year before the former. The drama starts with Kang Hyuk (Sehun) and his two friends deciding to step in to save Kim Gyu Soon (Yoo In Hwan) and his sister Kim Hyeon Seon (Kang Mina) from a gang of delinquents. Their kind deed, however, turns out to be the spark that starts a bonfire, and the group is soon sucked into a conflict with the reigning schoolyard bullies. Along the way, they are joined by Jon Gil (Jo Byung Kyu) and Tae Jin (Ahn Bo Hyun), drop-outs who each have their own motive for going against their common enemy. Bent on breaking the alliance between the gangs of two schools, Kang Hyuk and his motley crew have to punch above their weight in order to successfully take on the man who helms the school gangs — Jo Kang Hoon (Kim Hee Jin).

Here are some of the heart-stealing moments in “Dokgo Rewind” you’ll want to watch and rewind to watch again!

1. Parallel Lines: When Kang Hyuk and Kang Hun are together. 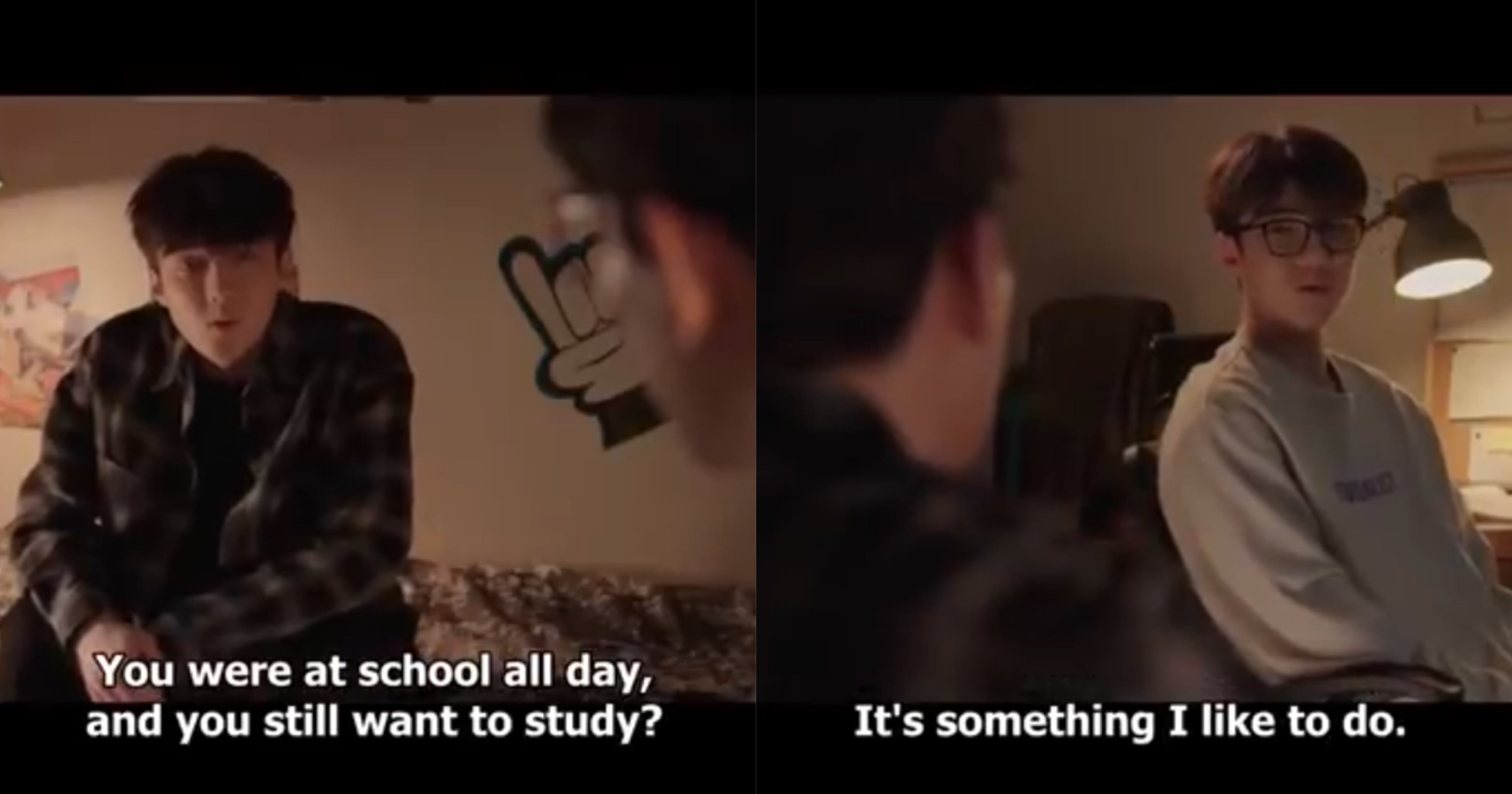 One interesting facet of “Dokgo Rewind” is the dual role Sehun plays as a set of identical twins, who, at first glance, are more different than similar. While older brother Kang Hun is scholarly and proper, the protagonist (younger twin Kang Hyuk) is a skilled fighter who has found a home for himself on the streets.

Scenes with both brothers in them are far and few between, but when they’re in, catch them, because it’s those moments that reveal the startling and heart-warming similarities between the pair.

Next, they are both gentle and intelligent. Although both express it in different ways, they are cut from the same cloth, and it shines through in their personalities. Kang Hyuk is often the voice of (rational and calm) reason in his group, and Kang Hun is so in their family as well.

In short, Kang Hyuk and Kang Hun make for an interesting pair of parallel lines; so similar, yet set on paths never to cross.

2. For a Friend: When Kang Hyuk and his friends hold a memorial for Gyu Soon at their hideout. 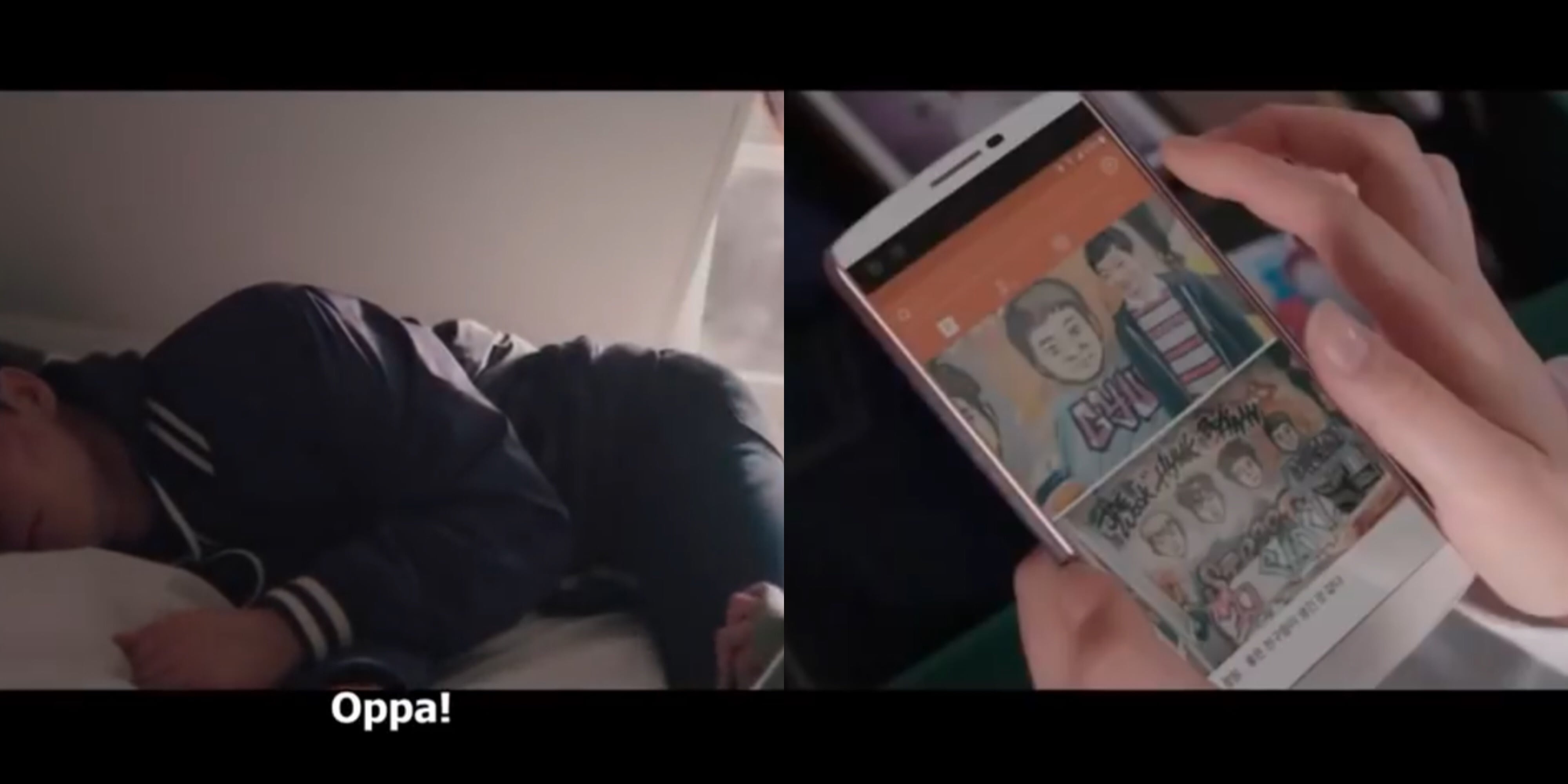 Kang Hyuk’s group of friends might not have known Kim Gyu Soon for long, but the scene where they find out about his death and Kang Hyuk’s subsequent flashbacks of the memories they made with him is heart-breaking.

Kidnapped into an abandoned warehouse by the schoolyard gang, Gyu Soon was beaten while trying to shield his sister. Even though Kang Hyuk and his friends showed up in the nick of time to rescue the siblings, the injuries Gyu Soon suffered proved to be life-threatening, and without medical care, his condition worsened throughout the night.

Out of respect for their friend, the three men hold a little memorial for Gyu Soon at their hangout spot in front of the wall where Kang Hyuk spray-painted Gyu Soon’s likeness. Friends are the family that you choose, and in this scene, we see that Gyu Soon as well as Hyeon Seo have found a home away from home with Kang Hyuk and crew.

3. Revenge vs. Justice: When Jon Gil and Tae Jin have their heart-to-heart. 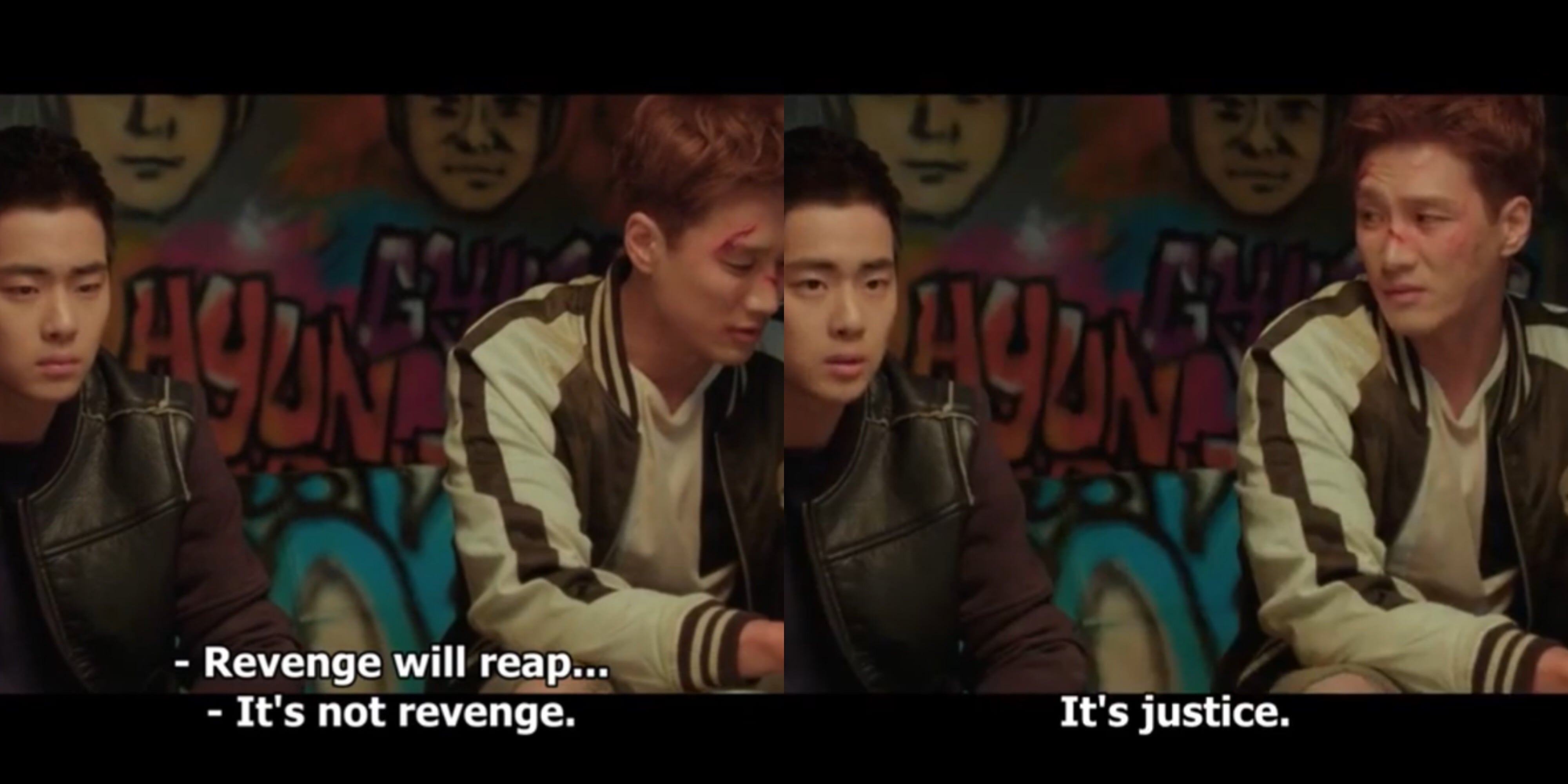 After Tae Jin shows up at the guys’ hideout and finds Jon Gil there, they have a mini heart-to-heart about why Jon Gil is joining hands with Kang Hyuk to take down the alliance.

When Tae Jin wonders if Jon Gil is only doing so out of revenge after he got suspended, Jon Gil calmly denies and says that it is for justice. These words are impactful, as Jon Gil has always been true to his word (staying out of the fight when it was for violence but taking action when it was to help his deaf classmate who was being bullied).

Revenge and justice are two themes that are threaded throughout the course of the drama. Which character is acting out of what? And why? Kang Hyuk tackles the alliance initially out of his sense of justice, but towards the end of the drama, what becomes of his initial motive? Those are some of the questions the drama raises, adding so much more flavor to the story.

4. Walk the Talk: When Jo Gang Hoon strolls into a fight like he owns the place.

Alright, so this is from the more superficial and Edna-esque side of me, but head honchos (especially when they are of a street gang!) just have a different aura about them that screams “evil genius,” and boss fighter Gang Hoon oozes it in spades. He’s perpetually late to fights (by a very exact 20 minutes, because why not?), and when he does arrive, he strides in like Batman to his Batcave (that’s to say, in style).

Like him or not, his evil genius step and menacing glares will have you hitting the rewind button. It would be a waste to not, trust me!

5. What’s Different? : When Jon Gil successfully bests the nemesis who previously took him down. 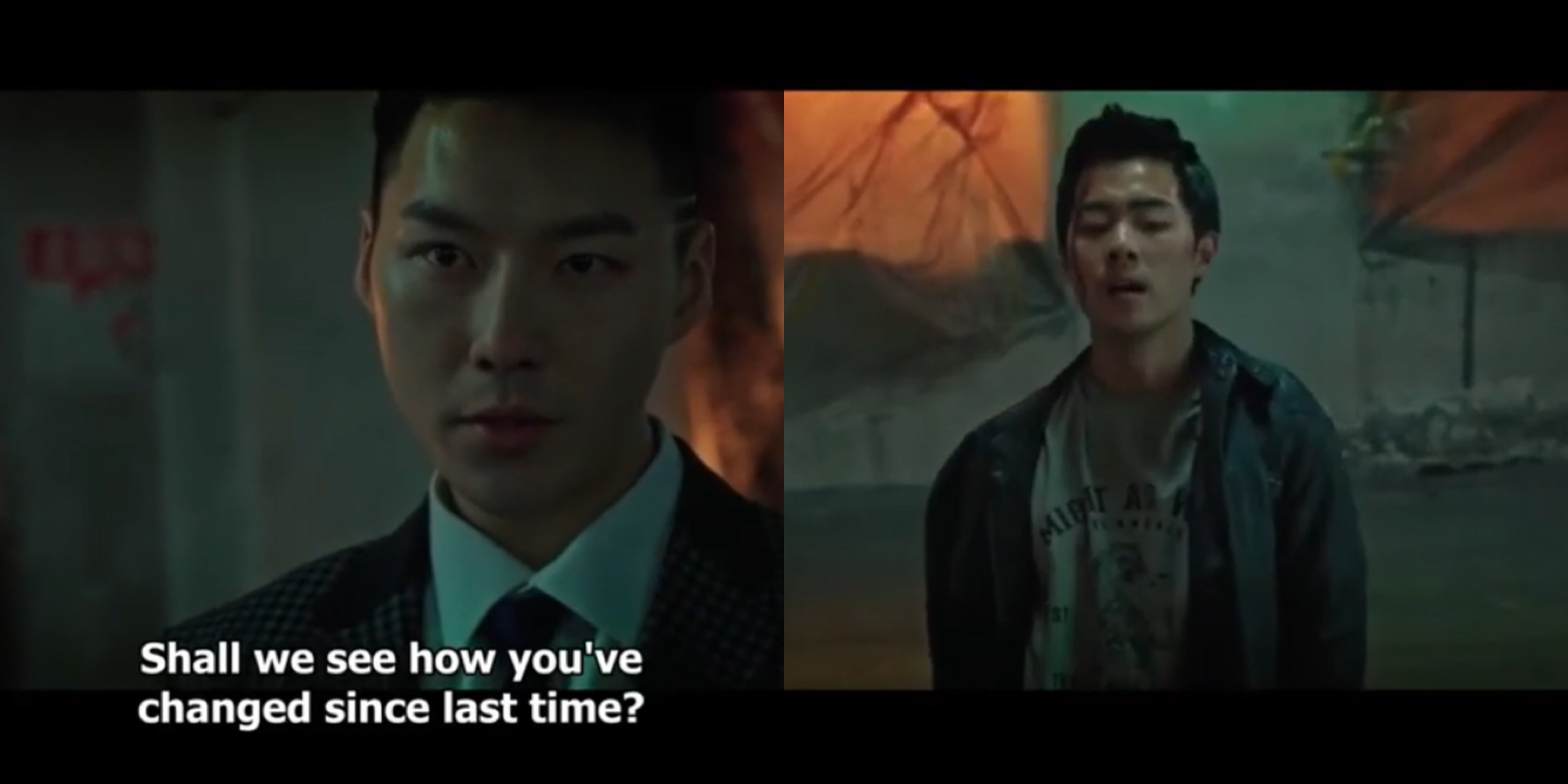 Don’t get me wrong, all the fighters are impressive and all the fight scenes are moments I watched with bated breath, but the final showdown between Jon Gil and his arch nemesis had me punching my fist in the air in triumph. “Feather” he may be, but he ain’t no featherweight!

After beating back the lackeys, Jon Gil is faced with the man who previously turned him into a bloody pulp by figuring out his tick and knocking one of his pens out of his grasp. This time, however, Jon Gil has had special guidance from Kang Hyuk and Tae Jin, and his improved technique takes his opponent by surprise.

Watching Jon Gil overcome his dependence on his two pens with Kang Hyuk and Tae Jin’s training to adapt and improve his form feels like everything has come to fruition at long last. 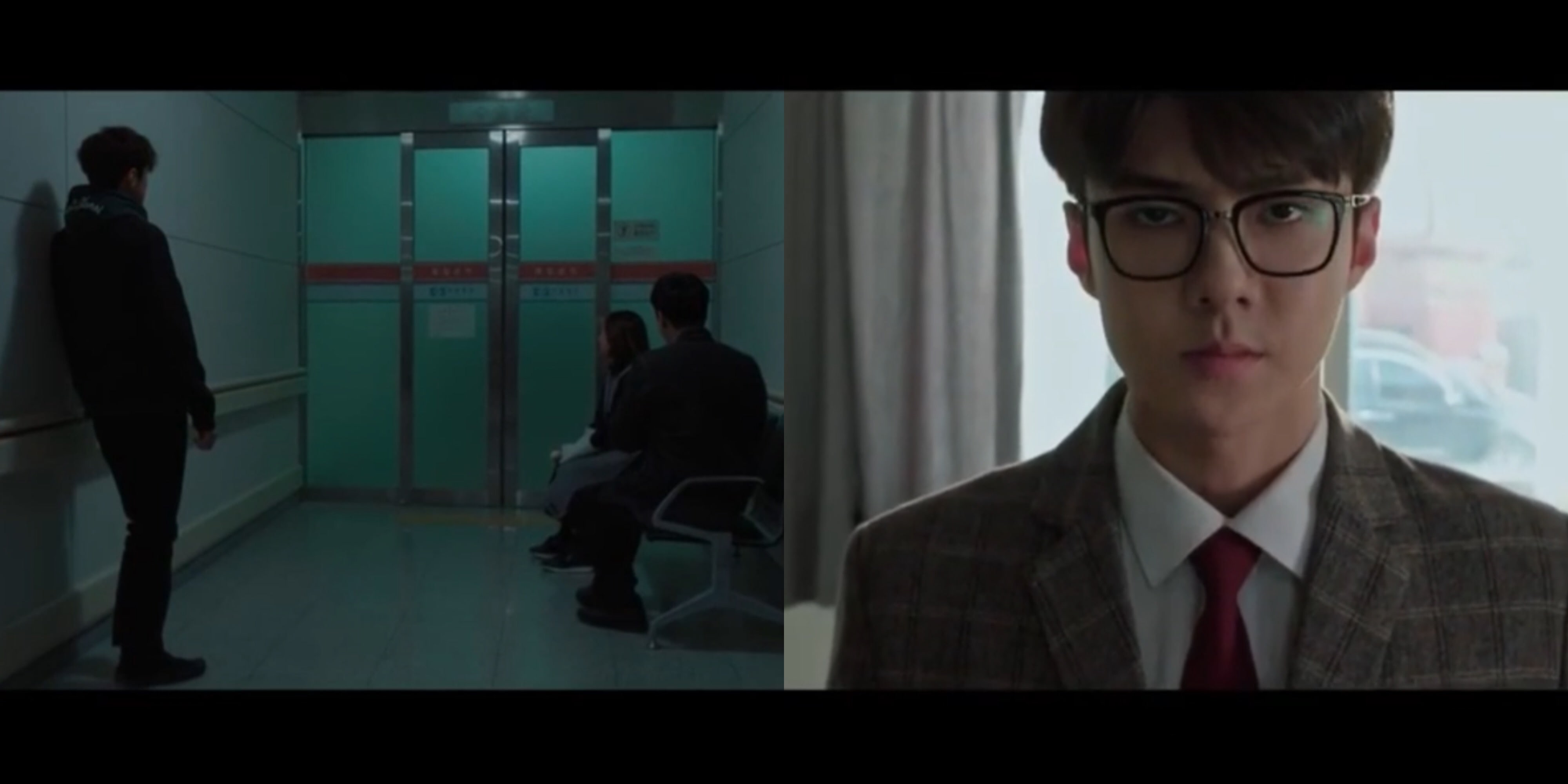 High off the cheer from conquering the schoolyard alliance, Kang Hyuk’s mood plunges into the depths of despair by the end of “Dokgo Rewind” with the news of his twin being attacked. Unfortunately, Kang Hun’s condition deteriorates rapidly, and he passes. In a haste to reach the hospital to care for his son, the twins’ father has an accident and also dies soon after. Grief-stricken from losing her husband and son in one fell swoop, Kang Hyuk’s mother loses her mind and leaves the family home, leaving Kang Hyuk as the sole remaining member of the once-happy and blissful family.

It comes as no surprise given that “Dokgo Rewind” is a prequel, but despite that, the loss of gentle and caring Kang Hun still feels like a little stab to the heart.

Though it immediately chills over when the mirror reveals the reflection of Kang Hyuk, who has seamlessly slipped into the skin of his older brother. His curly hair is now ironed straight, with the leather jackets and flannels abandoned in favor of a clean pressed shift and rimmed glasses.

Kang Hyuk must now use his face, this face that is the mirror reflection of Kang Hun, to live his brother’s life and ultimately seek justice and revenge. The eyes, though, are all Kang Hyuk’s, as cold and deadly as the poisonous drum (dokgo) he was once known as.

Soompiers, did you enjoy “Dokgo Rewind”? Which moments had your heartbeat racing? Share with us in the comments below!

If you haven’t already, watch “Dokgo Rewind” below: