With a week left until its premiere, JTBC’s “Clean with Passion for Now” has released a new poster!

A previously released poster focused on the relationship between Yoon Kyun Sang, who plays a cleaning company CEO and clean freak named Jang Sun Kyul, and Kim Yoo Jung, who plays a passionate job-seeker more interested in making a living than keeping things clean. Another poster also featured the introduction of Song Jae Rim‘s character, who is not in the original webtoon.

The new poster features for the first time the assemblage of the main cast. Yoon Kyun Sang and Yoo Sun look sharp in office wear, but look relaxed and happy as they hang out with their “cleaning crew,” Kim Yoo Jung, Kim Min Kyu, Hak Jin, and Cha In Ha in bright pink janitors’ uniforms. 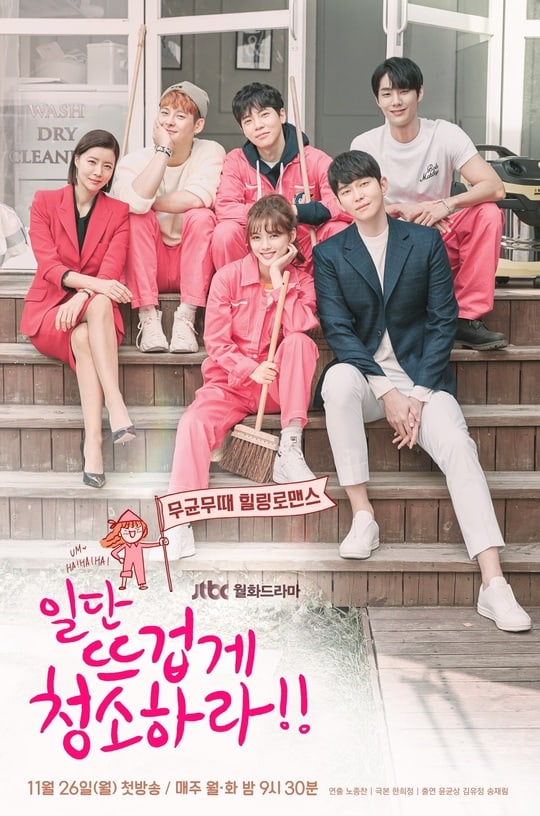 The production staff stated, “Yoon Kyun Sang and Kim Yoo Jung have such a perfect synergy that we couldn’t wish for anything more. Yoo Sun holds everything together and the teamwork between the energetic Kim Min Kyu, Hak Jin, and Cha In Ha is amazing. They all have their unique charms and immense passion for acting and bring laughs and healing with their synergy. The viewers will be able to feel this too.”

“Clean with Passion for Now” premieres on November 26.