On November 19, Han Go Eun reunited with Go Doo Shim for the first time in 14 years. She said, “She told me to contact her if I come to Jeju Island. The opportunity came up, so we were able to meet.”

They became emotional once they saw each other. Go Doo Shim commented, “I’m getting teary after seeing you.”

The two actresses appeared as mother and daughter in the drama “More Beautiful Than A Flower.” “I called her ‘Mom’ and was fond of her,” explained Han Go Eun. Han Go Eun’s husband Shin Young Soo watched and waited next to them. Introducing her husband, she asked, “Isn’t he handsome?” and Go Doo Shim replied with a smile, “He looks like a good person.”

Han Go Eun and Go Doo Shim explored Jeju Island together while holding hands like a mother and a daughter. They continued to talk once they sat down in a restaurant. 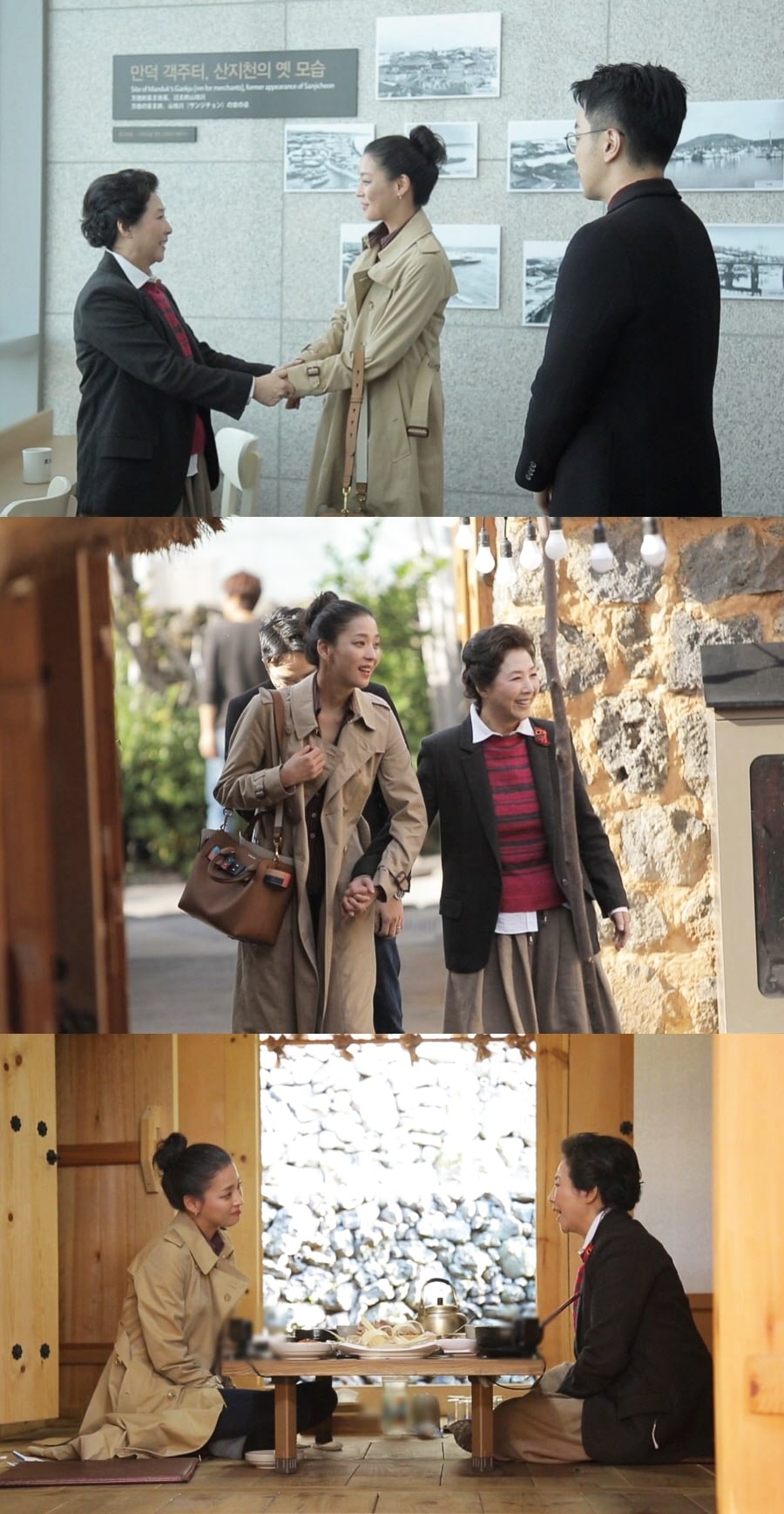 Go Doo Shim said, “Because of the job of an actress, it’s difficult to get close even if you do a drama together. But I’m happy that we have this relationship.” She also worried about Han Go Eun’s husband being described as “an actress’s husband” and the difficulties of living as someone in the public eye.

She added, “But think of it as a good thing and have a positive mind. Be happy and always be healthy together.” Han Go Eun said, “With the words from my teacher who’s also my senior, my sympathy widened for my husband as well.”

Go Doo Shim introduced the couple to Jeju Island’s famous dishes. Han Go Eun commented, “My mom passed away early, so I felt sorry that he couldn’t eat a meal prepared by his mother-in-law.” Go Doo Shim then expressed her affection by saying, “I should’ve prepared a whole chicken!”

Han Go Eun’s husband was curious about what his wife was like 14 years ago and asked Go Doo Shim about her. She answered that Han Go Eun was a fashionista then, as she is now, and gave off the vibes of someone who studied abroad.

“It was not too long after I arrived in Korea,” said Han Go Eun. “It was when I missed my mom. I relied a lot on Go Doo Shim who resembled my mom.”

The actresses then brought up their drama “More Beautiful Than A Flower.” Han Go Eun began, “She was like a mom to me when I had to endure a new atmosphere alone. It felt like I would just be a burden,” and thanked the actress for warmly embracing her at the time.

Han Go Eun’s husband briefly stepped outside and the two actresses spent some time alone. “My mom passed away so suddenly,” began Han Go Eun. “She passed away because of a stroke. I needed someone to carry the casket, but I didn’t know anyone and I didn’t have anyone to ask.”

She continued, “My husband’s friends carried the casket. My family-in-law all came to help. It made me think that this is what a family is.”

Go Doo Shim replied, “That is what family is. You love your husband. The parents of someone you love are the same as your own parents. If you approach them that way, they’ll love you. That’s what life is.” 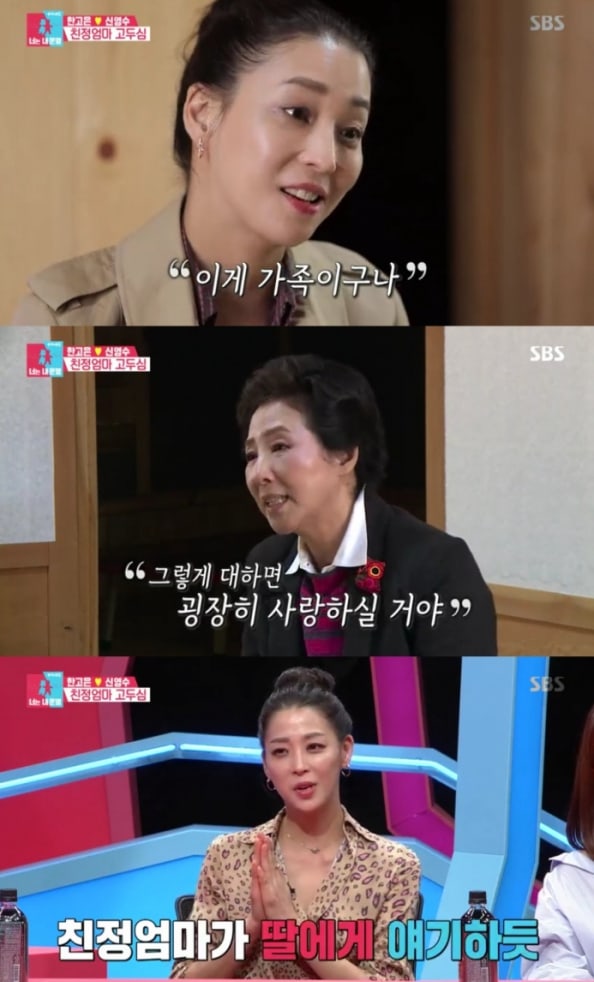 The two then surprised each other with thoughtful gifts. Go Doo Shim also gave Han Go Eun a handwritten letter that brought her to tears where she expressed her hopes that Han Go Eun would only walk on a flower path from now on.

Han Go Eun remarked, “Since my mom’s not here, it was really nice to hear her tell me things that my mom should’ve told me.” 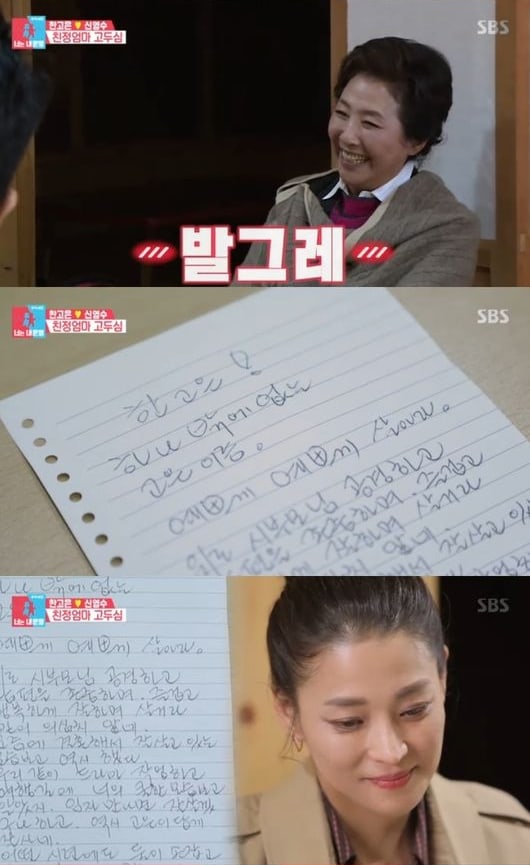 Go Doo Shim
Han Go Eun
Same Bed Different Dreams 2 – You Are My Destiny
How does this article make you feel?