“We reveal one of the detailed evidence that supports our previous official statement. Mr. Hwang, the CEO of Mountain Movement Story, and a representative from Park Hae Jin’s agency Mountain Movement said that he will sign the contract agreement regarding the extension of Park Hae Jin’s appearance with us if we drop charges of obstruction of business against him. We clearly reveal that he assured us that Park Hae Jin will finish filming even if the date on the agreement contract passes.”

Victory Contents: “We just received a call from Director Kim. We have a meeting with Park Hae Jin at 3 tomorrow, but he said that CEO Hwang can’t see us. Director Kim was timid when he said… that it was because CEO Hwang has to go to the police because he got sued. >> is this true?”

Victory Contents: “The lawyer is trying to find out the details, so you can proceed with the meeting.”

CEO Hwang: “Yes. Yesterday, Park Hae Jin met the lawyer because of (blank) and he heard that I will be going to the police station on the 29th.”

CEO Hwang: “He said that it didn’t feel right for him to participate in the script reading while his CEO is going under investigation. So he asked me [to tell the director].”

CEO Hwang: “You are dropping the charges, right? If you tell me before you drop the charges, I’ll tell our lawyers as well.” 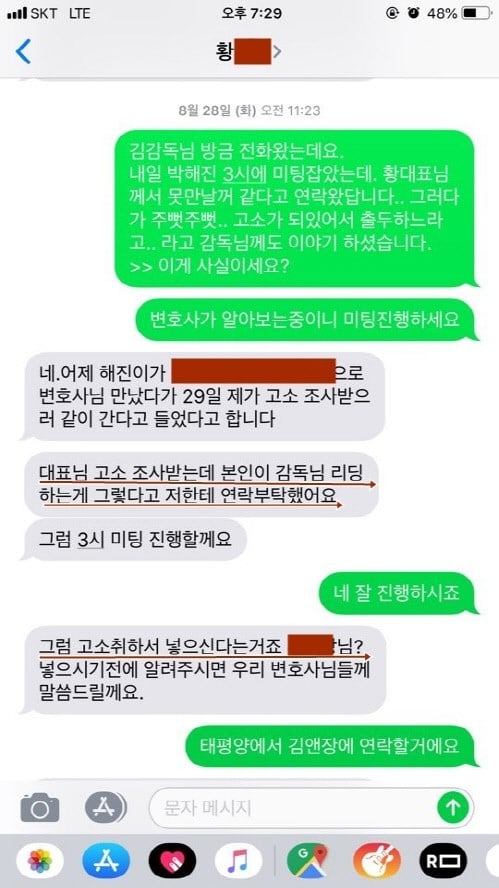 CEO Hwang: “Lawyer (blank) is on vacation overseas. So you can submit the files needed for dropping our charges no later than tomorrow morning. Please message me. Or Lawyer (blank) can message me so that I can contact another lawyer.”

Victory Contents: “Can you sign a contract agreeing to the extension of filming even though the filming might end later than the end of October? Everyone is just so anxious. If the female lead changes as well, we can’t finish filming by the end of October.”

CEO Hwang: “I called the director after he finished his call. When will the files for dropping our charges be submitted?”

CEO Hwang: “I think they want to talk to the person in charge because the withdrawal files were late.”

Victory Contents: “Bae, Kim & Lee LLC says that they are ready and they will submit it now..”

CEO Hwang: “Okay. Please message me after you submit the files. The reporter from the local news sector of (blank) newspaper keeps calling..”

CEO Hwang: “I told the reporter no, and said that there was a misunderstanding.” 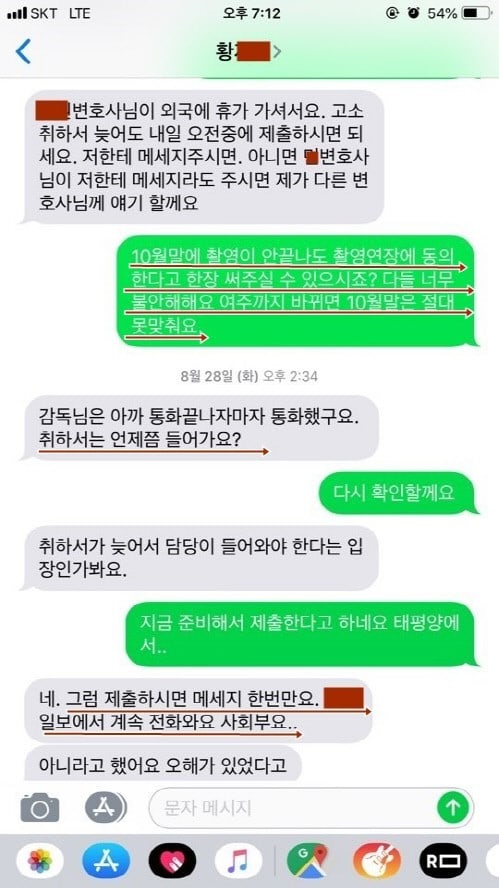 Victory Contents summarizes and explains their position further below:

“1. In the messages in (1), CEO Hwang said that it is hard for the director and the actor to meet because Park Hae Jin decided not to attend the script reading session due to CEO [Hwang] having to undergo a police investigation. However, when we revealed that we will discuss dropping the charges of Mountain Movement, he agreed to meet up for a meeting at 3 p.m. right away. He reconfirms our position on submitting the withdrawal files. He tried to stop the director from meeting Park Hae Jin by saying that it was Park Hae Jin’s own choice not to meet up with the director. This is a typical abuse of power that disrupts the production business.

“2. In the messages in (2), CEO Hwang keeps asking when the withdrawal files will be submitted although we are talking about signing the agreement form for the extension of Park Hae Jin’s participation even after the October deadline ends. After the messages at 11 a.m., the director shared a call with CEO Hwang. CEO Hwang assured the director that Park Hae Jin will participate in filming even after the marked deadline on the agreement form ends. CEO Hwang contacted us at 2 p.m., saying that we should submit the files because he called the director.

“The charges of obstruction of business against him were dropped after he assured the extension of Park Hae Jin’s participation to the production company and the director. He is not keeping his promise and Park Hae Jin is not showing up for filming.

“The conflict regarding the fulfillment of the agreement form mentioned by the legal representative of Mountain Movement today is not a problem between Park Hae Jin’s agency and Victory Contents. It is a problem between our company and Mountain Movement Story, where Mr. Hwang is the CEO and has nothing to do with Park Hae Jin. We are currently going through the legal process to file a complaint against Mr. Hwang.”

What are your thoughts on their official statement?

Park Hae Jin
Four Sons
How does this article make you feel?