tvN’s “Mama Fairy and the Woodcutter” has unveiled new behind-the-scenes photos of its cast!

On November 25, the fantasy romance drama released new photos capturing its stars having a blast between takes. Actor Yoon Hyun Min laughs brightly off-camera, looking absolutely nothing like his cold, aloof character Jung Yi Hyun, while Seo Ji Hoon and gugudan’s Mina pose cutely for the camera while going over their lines. Actresses Jun Soo Jin and Moon Chae Won both brighten the set with their gorgeous smiles, giving us a glimpse of the fun, effervescent atmosphere during filming.

The stars of “Mama Fairy and the Woodcutter” credited their on-screen chemistry to the cheerful energy on set, describing their amazing teamwork as the key to the drama’s charm.

Yoon Hyun Min remarked, “I think that the chemistry we create by portraying unforced, natural emotions between kind people, without any villains, is what fuels the warm vibe of ‘Mama Fairy and the Woodcutter.'”

He went on, “It seems like the characters’ positive emotions towards one another within the drama are giving the viewers positive energy as well.”

Seo Ji Hoon similarly commented, “I think that it’s because we are telling our story within a happy atmosphere that viewers are able to enjoy the drama with even more warmth.”

He added, “Even if small conflicts arise [within the drama], there are characters nearby to resolve those conflicts, and because they are moving forward and solving [those issues] together, I think the viewers can enjoy [the story] more and feel more comfortable.” 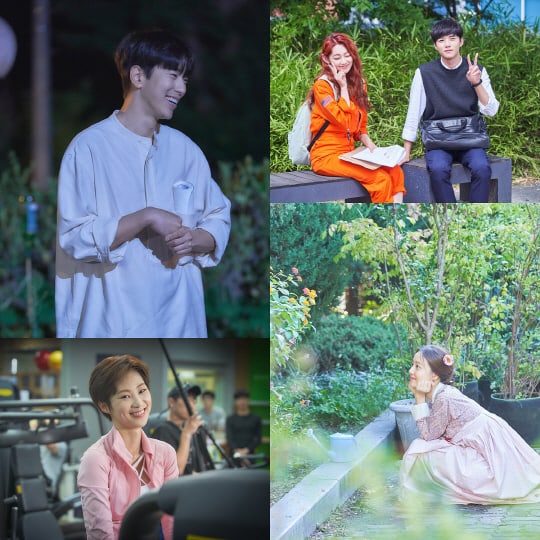 “Mama Fairy and the Woodcutter” is a fantasy romance that tells the story of Sun Ock Nam (played by Moon Chae Won), a fairy who has waited 699 years for the reincarnation of her husband. While working as a barista, she encounters two different men who could possibly be her reincarnated husband (played by Yoon Hyun Min and Seo Ji Hoon). The drama airs on Mondays and Tuesdays at 9:30 p.m. KST.