JTBC’s upcoming drama “Clean with Passion for Now” has released new stills of its main cast!

Based on the famous webtoon of the same name, “Clean with Passion for Now” is about Jang Sun Kyul, the CEO of a cleaning company who thinks cleanliness is more important than anything, and Gil Oh Sol, a passionate job seeker who has no time to clean up after herself. Yoon Kyun Sang will play the CEO with mysophobia and Kim Yoo Jung will play the job seeker who begins to work in Jang Sun Kyul’s company. Song Jae Rim appears as the mysterious “Mr. Choi,” Gil Oh Sol’s neighbor and an original character for the drama adaptation of the series.

In the stills, Jang Sun Kyul and Mr. Choi both react in their own unique ways to a drunk Gil Oh Sol. Although Gil Oh Sol will be known for her bright energy throughout the show, in one photo, she sits down at a table by herself looking somewhat disappointed. Jang Sun Kyul discovers her drunk and with her heels set aside on the ground. He looks meticulous from head to toe due to his clean outfit, but the single cut on his cheek looks out of place. He is sure to have viewers’ hearts pounding when he slides a pair of sandals near Gil Oh Sol’s bare feet. 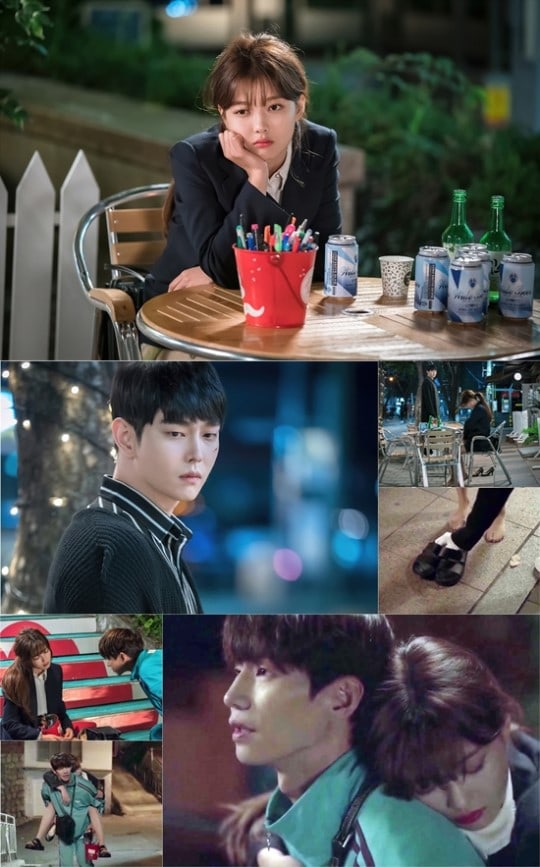 In another set of photos, Mr. Choi finds Gil Oh Sol sleeping by herself on the stairs. He stares at her intensely, and eventually carries her on his back to walk back home. Both men’s contrasting ways of caring for Gil Oh Sol will add onto the fun in “Clean with Passion for Now.”

The production staff stated, “Jang Sun Kyul and Mr. Choi’s opposing qualities will be a key point [of the show]. Viewers should look forward to this love triangle between Yoon Kyun Sang, Kim Yoo Jung, and Song Jae Rim, who are portraying their character’s unique qualities and charms with their best judgement.”

“Clean with Passion for Now” will air its first episode on November 26 at 9:30 p.m. KST as the follow-up drama to “The Beauty Inside.”