Kim Yoo Jung and Yoon Kyun Sang made a guest appearance on JTBC’s “Ask Us Anything” and talked about their first impressions of each other.

The two actors are set to lead the new JTBC Monday-Tuesday drama “Clean with Passion for Now.” Ahead of the show’s premiere, they appeared on “Ask Us Anything” and showcased their chemistry.

Kim Yoo Jung and Yoon Kyun Sang were asked about their first impressions of each other as they had met each other for the first time through the drama. Yoon Kyun Sang said, “I was really worried about how I should approach her because although I’m older than her, she’s been in the acting industry a lot longer than I have. But she helped chase those worries away when she approached me first and said, ‘I’m going to call you hyung (older brother), so please feel free to act comfortably around me.” 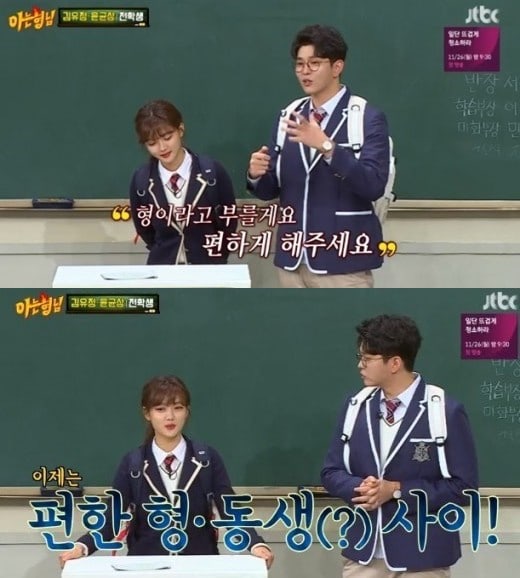 When asked why she calls Yoon Kyun Sang hyung and not oppa, the term usually used by women to address men who are older than them, Kim Yoo Jung explained, “Hyung is the term I normally use. Because I’ve been acting from such a young age, I found it difficult to transition from calling people samchon (uncle) to calling them oppa. So I either use formal titles or I call them hyung. It seems to make people feel more at ease too.”

The two said that thanks to Kim Yoo Jung’s approachable personality, they’re now very comfortable around each other.

Kim Yoo Jung and Yoo Kyun Sang’s “Clean with Passion for Now” will premiere on November 26 at 9:30 p.m. KST.

Yoon Kyun Sang
Kim Yoo Jung
Ask Us Anything
Clean with Passion for Now
How does this article make you feel?