On the latest episode of “Master in the House,” Lee Sang Yoon’s mom made the cast burst into laughter!

During the November 25 broadcast of the SBS variety show, the members spent the day with their newest master, actress Kim Soo Mi. Kim Soo Mi quizzed the four cast members on how well they knew their moms, asking them questions such as their mother’s lipstick color and favorite food.

BTOB’s Yook Sungjae and Lee Sang Yoon both showed confidence in their knowledge of their moms, but after calling their mothers and asking them the same questions, they repeatedly discovered that their answers were wrong.

The final question of the quiz was “What words do you want to hear from your son?” After some contemplation, Yook Sungjae’s mother replied, “Mom, I love you.” After hanging up, Yook Sungjae said, “I usually can’t say these kinds of things. I think my mom hesitated just now as well.”

Kim Soo Mi remarked sadly, “People say ‘I love you’ a lot in dramas and films, and yet you don’t say it to your moms?”

Later on, Lee Sang Yoon asked his mom the same question about which words she most wanted to hear. After taking some time to think about the question, she finally answered, “‘I’m getting married.’ I want to hear you say, ‘Mom, I’m going to get married.’ You’ve gotten older now.”

Lee Seung Gi then told her over the phone, “Lee Sang Yoon got all of the answers wrong, so he was hit with a gourd [as punishment].” He added jokingly, “I think you’re better at variety shows than Lee Sang Yoon.” 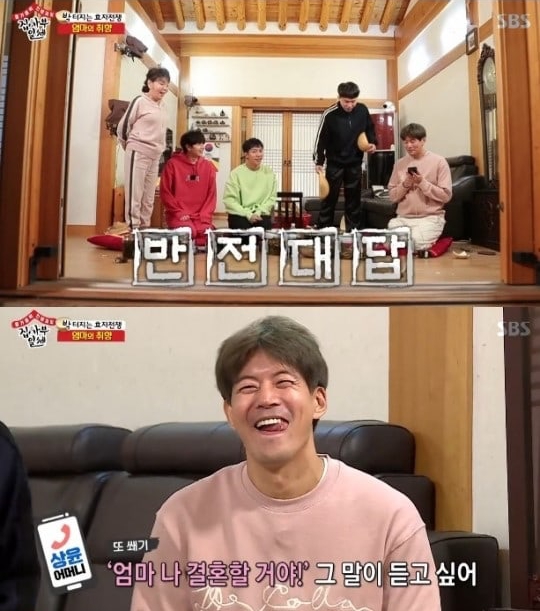