“Encounter” is a new Wednesday-Thursday drama that will tell the love story of Cha Soo Hyun (played by Song Hye Kyo), a woman who was born into privilege but never had the chance to live a life of her own choosing, and Kim Jin Hyuk (played by Park Bo Gum), a cheerful free spirit with a pure and innocent soul. After the two meet through a chance encounter, they find themselves caught up in a heart-wrenching romance that turns both of their lives upside down.

On November 27, with just one day left until its premiere, the drama released new stills of Park Bo Gum in his role as Kim Jin Hyuk. An indefatigable ray of sunshine, Kim Jin Hyuk spreads good vibes and positive energy wherever he goes.

Even while making deliveries in the rain for his part-time job, Kim Jin Hyuk wears a bright, infectious smile and exudes an air of cheerful optimism. Kim Jin Hyuk is also great with children, and the newly released photos show the character energetically playing with kids as he spends some quality time with his family. 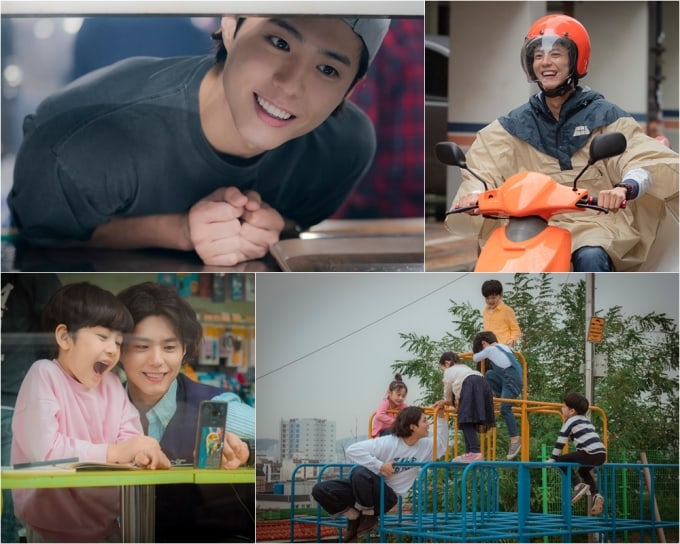 The producers of “Encounter” commented, “Park Bo Gum has been displaying incredible synchronization with his character Jin Hyuk, as if wearing a custom-tailored suit. Please look forward to the first episode of ‘Encounter,’ which will feature his warmth and bright energy, as well as various sides of [his character].”

“Encounter” premieres on November 28 at 8:30 p.m. KST and will be available with English subtitles on Viki.

In the meantime, check out the highlight reel for the drama here!

Park Bo Gum
Encounter
How does this article make you feel?