BTS won the Daesang (grand prize) in the artists category at the 2018 Asia Artist Awards!

This is the third year of the award show, and this year’s ceremony was held on November 28 in Seoul.

While accepting their Daesang, Jimin said, “ARMY, we’re BTS. First off, I want to express my sincere thanks for this Daesang, which is a huge honor. Thank you, ARMY. Many things have happened this year. I feel like it was a year where I realized once again how my time with ARMY and my members is so precious. I want to say thank you to ARMY and my members. We’ll make it up to you in the rest of the year. Thank you.”

The next member to speak was Jin. He said, “We’ve received a Daesang thanks to all of you. We always think that this isn’t an award for us; it belongs to the ARMY who have given it to us. We’ll always love ARMY, so please keep looking over us.”

Jungkook commented, “When I think back on this past year, great things have happened since the beginning. I’m happy because there will be more great things happening up until the end of the year. As time goes on, as the time I’ve spent with all of you gets longer, I think my quality of life increases. I’m really looking forward to more happy days in the future too. I hope that we’ll walk together while having fun and being happy. We’ll make you happy, so please be with us together in the future too.”

Suga said, “It’s almost the end of the year and we’ve received this great award, so I’m so thankful. I want to say thank you to ARMY. I’m happy that we’ve received a lot of awards. It’s almost December, so be careful not to catch a cold, and I hope that this year wraps up well.”

Leader RM said, “They’ve all said such great things. First off, thank you to all the great artists who are here together with us. Thank you to our Big Hit family and staff.”

He went on to say, “It’s not a matter of course that we’d receive an award. We’re happy just to be here.” He also referred to the group’s formal greeting as he said, “This is already the fifth time we’ve come here since we exclaimed ‘Two! Three!’ There was something I said during my acceptance speech two years ago. I said ‘AAA ARMY ARMY ARMY.’ We really love you. We won Best Artist that time, and now we’ve received the really great honor of the Daesang. Thank you, we love you.”

J-Hope said, “I’m really grateful to our ARMY, to the members, to our family, and Big Hit Entertainment. There’s something I want to say. When I was young, I saw Se7en’s ‘Passion’ and it made me feel passion and have dreams. I’d like to take this opportunity to express my gratitude to the many senior artists who made us dream.” He also turned to MC Leeteuk of Super Junior and thanked him and Super Junior.

“There are so many things I want to tell you, and so much music and so many performances that I want to show you,” he continued. “I’ll show you a cool image. Please keep loving us. ARMY, we love you!”

Finally, V said, “We’ve received a lot of gifts from ARMY in 2018. We wanted to make it up to you with performances, but we couldn’t provide something that was as good as your gifts. We’ll return to you in 2019 with better performances. This morning, there was something that I wanted to say if we won an award, but I’ve forgotten it. I think I’ll remember it tomorrow morning. When I think of it, I’ll tell you on social media.” 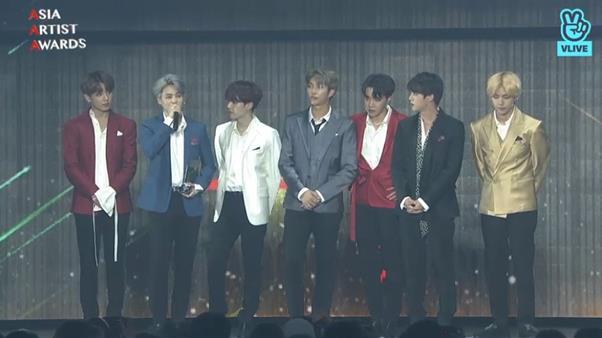 BTS
2018 Asia Artist Awards
How does this article make you feel?