Wanna One took home another Daesang at the 2018 Melon Music Awards!

The ceremony took place on December 1 at the Gocheok Dome in Seoul. Including their Best Record of the Year Daesang award, Wanna One was also awarded Top 10 artist and Best Dance (Male).

A new Daesang category this year, Best Record of the Year is given to an artist and their respective producer(s) together who marked notable musical accomplishments and released music of high caliber with correlating results over the past year.

It takes a look at not only singers themselves and their releases, but also the quality of all the processes involved in the creation of an album, including the planning, producing, performance directing, music videos, and performances. It is 100 percent decided by judges’ score.

Yoon Ji Sung expressed, “We are already grateful for just being invited to Melon’s 10th anniversary [ceremony], but thank you for giving us such a huge award. Wanna One in particular is a group uniquely born because of ‘nation’s producers.’ I sincerely thank you for allowing us to dream and to achieve our dreams.” After thanking everyone who works with them, he added, “There is only a little left to 2018. Please finish out the year well and thank you very much for allowing us to dream. To our Wannables [Wanna One fans] who let us dream, we will now become Wannables’ dream.” 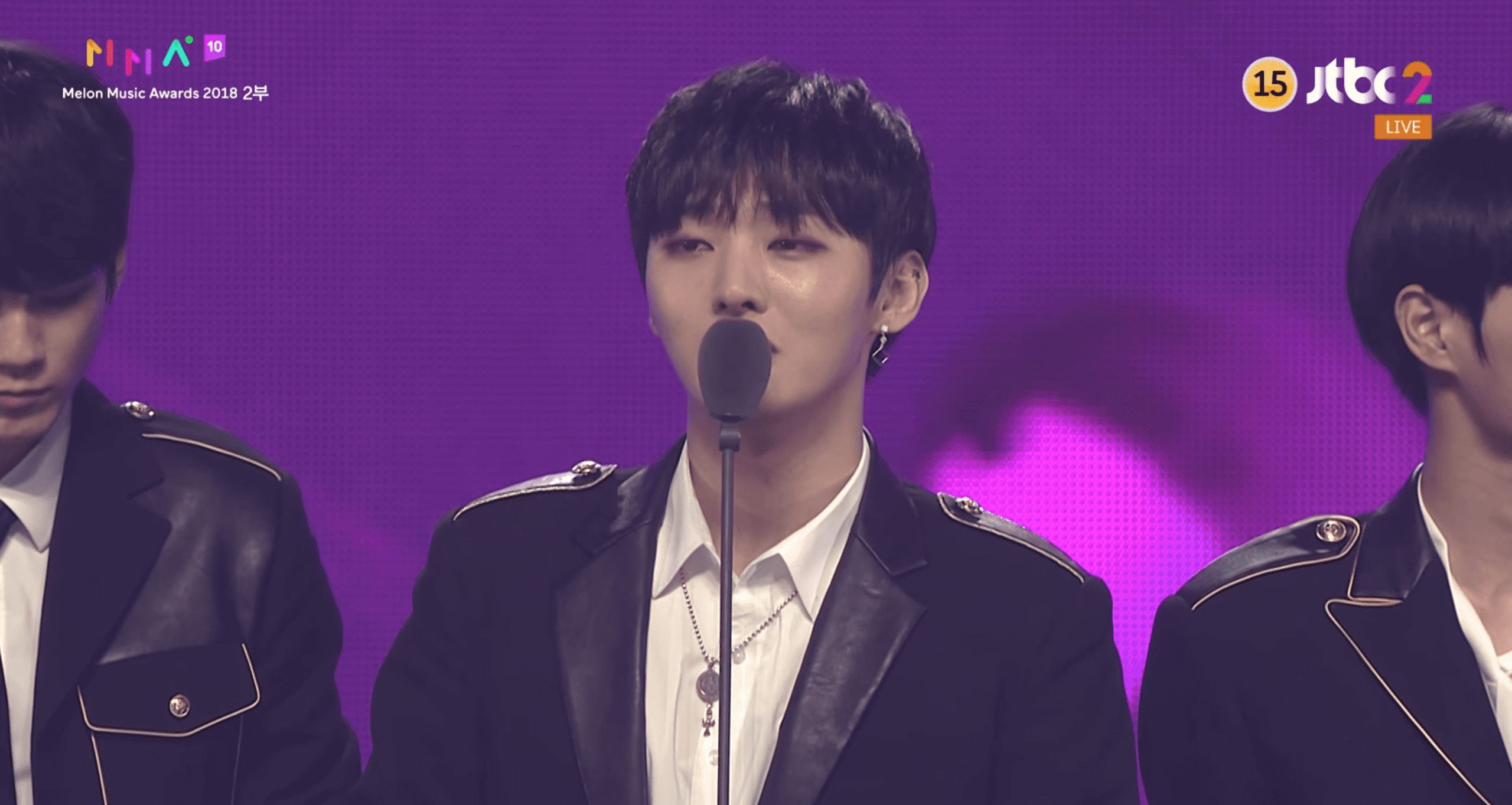 Next to speak, Ong Seong Wu shared, “I am someone who never received awards until I became a part of Wanna One. While singing and dancing, I also heard that I lost my senses and needed to face reality but I kept practicing hard. I have become someone who is my mother’s admirable son, an admirable family member, a part of Wannable’s Wanna One who receives a big award like this. Thank you so much for giving us such a precious award. I will continue to become someone to be proud of for a long time.”

Hwang Min Hyun said, “Thank you Wannables, who are so precious to us and have walked with us every moment, every day. Thank you for everything until now, thank you for right now, and I will continue to thank you.”

“The eleven of us don’t think that this prize is ours,” Park Woo Jin commented. “You always say that you exist because of us, but I think Wannables are wrong. We exist because you do.”

Echoing his fellow members, Bae Jin Young added, “We always practice hard to look good for Wannables. I thank you so very much as I believe that you all have made that effort come to fruition.”

While quoting lyrics from Lai Guan Lin expressed that he felt apologetic for always just receiving. Referencing how they were a group voted by fans, Lee Dae Hwi said, “The greatest producers are you all who chose each and every one of us.”

Kim Jae Hwan concluded, “We are very happy and grateful to be able to always show us improving and working hard to Wannables. I am so happy to be able to perform in front of talented artists. I’m overwhelmed with emotions. We will repay our fans by improving even more and working even harder. Everyone, I love you.” 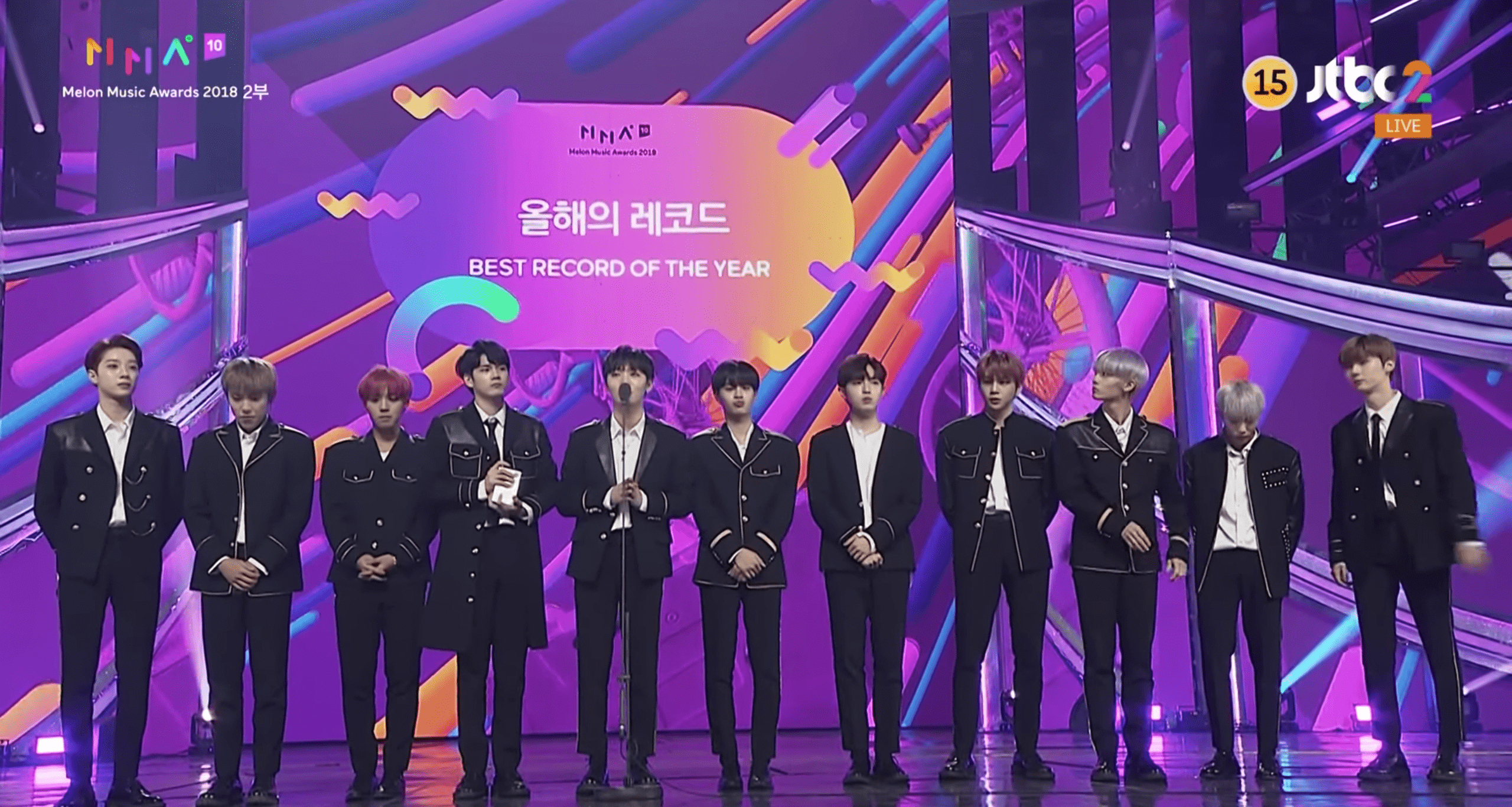 Check out the full list of winners here and performances here.

Wanna One
2018 Melon Music Awards
How does this article make you feel?