Gaon Chart Music Awards has announced its decision to remove the popularity award that is decided by fan votes in their upcoming ceremony.

The 8th Gaon Chart Music Awards will take place on January 23 at the Jamsil Indoor Gymnasium.

The executive office of the awards show has released an official statement regarding their decision to remove the popularity award, as well as their goals for this year. They stated, “Gaon Chart and Gaon Chart Music Awards, which awards the albums, artists, and music industry professionals who shined over the past year, were created for the music industry.

“With many awards shows being held now and market saturation rising, both singers and fans are feeling increasingly fatigued, and the prestige and symbolism of such music awards shows is fading.

“We are fully aware that Gaon Chart Music Awards are not free from responsibility for the current state of the market. We have determined the current issues that face the market and have made the following decisions in order to better the situation:

“First, we have decided to eliminate the Popularity Award that is determined 100 percent by fan votes as it causes unnecessarily high levels of competition amongst fandoms. With the number of music awards shows in Korea surpassing 10, popularity awards have led to many negative side effects. Therefore, until we are able to come up with a voting method that both music industry professionals and the general public can relate to, we will be eliminating popularity votes and awards that are completely determined by fan votes.

“Second, we have change the ticket reservation system in order to combat the issue of macros and scalping tickets. The new system will require people who to attend the show to register for a random draw. We realize that this will not completely eliminate the issue of scalping, but we will do our best to ensure that people cannot use macros and other technological methods to buy multiple tickets.

“Thirdly, we will work to focus more on awards presenters. Till now, we have focused all of our attention on the recipients of our awards and have therefore been lacking when it comes to presenters who are there to congratulate the recipients. We wish to sincerely apologize to the singers and fans who were hurt by the unexpected and unrehearsed situation that occurred in the last awards ceremony involving a presenter, and we will do our best this year to create an awards show that moves singers and fans.” 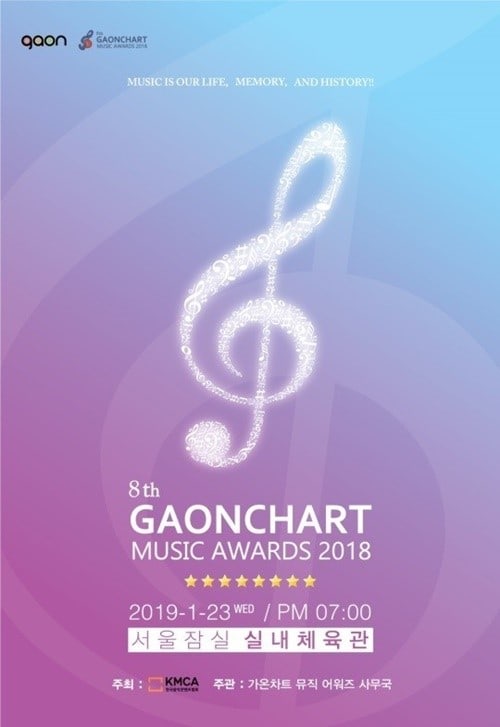 The 8th Gaon Chart Music Awards will be held on January 23 at the Seoul Jamsil Indoor Gymnasium.

8th Gaon Chart Music Awards
How does this article make you feel?