SBS’s “The Last Empress” has released stills of Choi Jin Hyuk and Shin Sung Rok in a competitive swimming scene.

“The Last Empress” premiered on November 29 to solid ratings at the top of its time slot. The drama stars Shin Sung Rok as the emperor in an alternate universe where Korea is ruled by a constitutional monarchy and Choi Jin Hyuk as the imperial bodyguard. Jang Nara plays a musical actress who rises to the position of empress and gets involved in the complex political machinations of the royal family.

In the last episode, Choi Jin Hyuk’s character turned over a new leaf and applied to become an imperial bodyguard. However, the emperor suddenly showed up at the final interview and threw things into chaos by firing a gun. When he aimed it at Choi Jin Hyuk, Choi Jin Hyuk took the gun away and aimed it at the emperor’s face instead.

Although the emperor’s face awakened memories of his mother’s unjust death, Choi Jin Hyuk put down the gun. The emperor, impressed with his guts, hires him as the emperor and empress’s personal bodyguard. 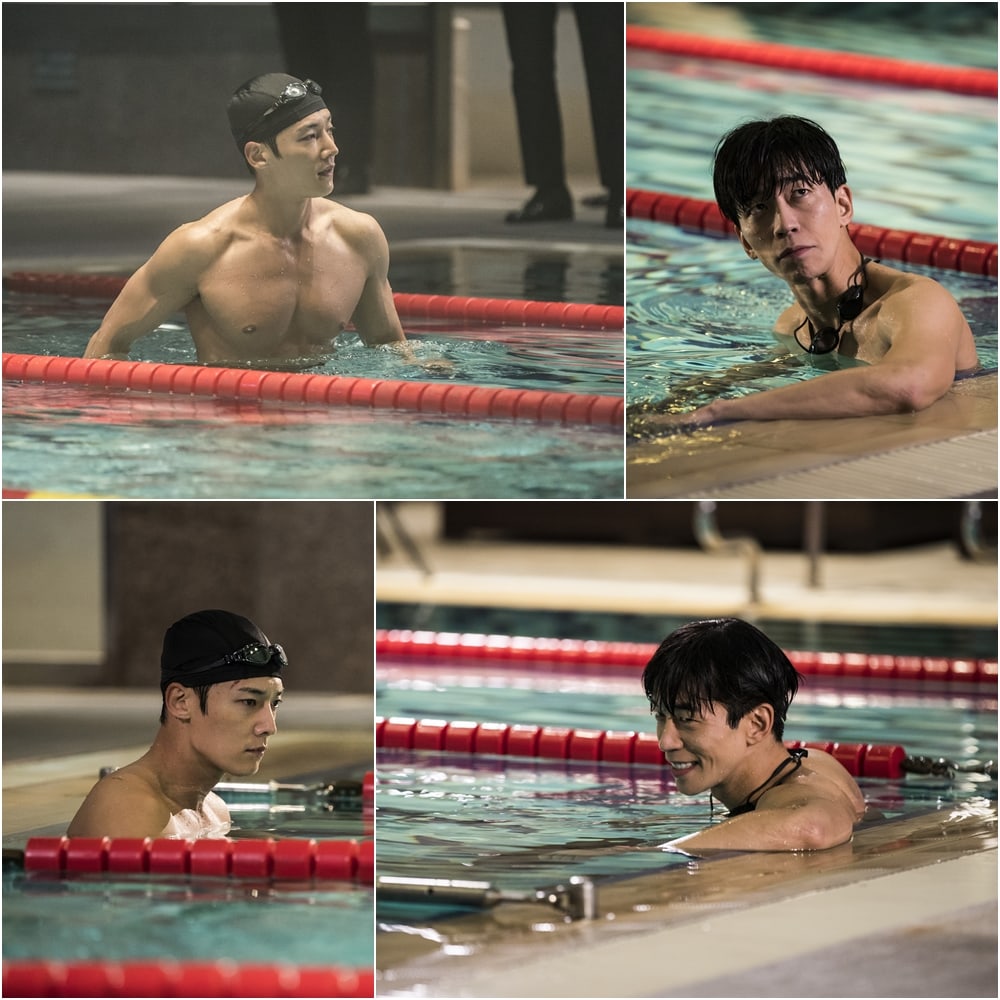 In the new stills, the emperor and the bodyguard appear to be having a private swimming competition in the pool at the imperial palace. Although Choi Jin Hyuk looks like he’s taking the competition seriously, Shin Sung Rok looks more entertained, using the exercise to get closer to his new bodyguard.

The scene was filmed in Yeouido at a late hour when no one would be using the swimming pool. Therefore, filming ended very late that day, but they were able to complete the scene as quickly as possible due to the efforts of the cast and crew.

The two actors in particular showed the fruits of the physical training they’d been doing in preparation for their roles, filming multiple swimming shots over two hours while maintaining a cheerful and positive atmosphere.

The production staff stated, “Chun Woo Bin has successfully become an imperial bodyguard as he had planned and received the surprising favor of the emperor. This scene is an important one in the drama’s overall flow.”

You can watch the latest episode of “The Last Empress” here:

Choi Jin Hyuk
Shin Sung Rok
The Last Empress
How does this article make you feel?