NU’EST W appeared as guests on the December 4 episode of JTBC’s “Idol Room.”

During this episode, the two hosts Defconn and Jung Hyung Don first focused on JR. Defconn pointed out that JR gifted Jung Hyung Don with pine mushrooms after getting to know each other through “Night Goblin.” JR explained, “My parents directly imported them.”

When asked who are the three best three variety show teachers in his heart, JR grew nervous and respectfully responded that he learned a lot from the cast of “Night Goblin.” He chose Park Sung Gwang as third place and said, “He’s rough on screen, but he’s very good to me off camera.” He ranked Lee Soo Geun second place, explaining, “He always took care of me and helped me learn.” JR then picked Jung Hyung Don as his first mentor and shared, “Actually, when I first did a variety show, I met many good people. Thanks to them, I was able to do many programs on JTBC.” 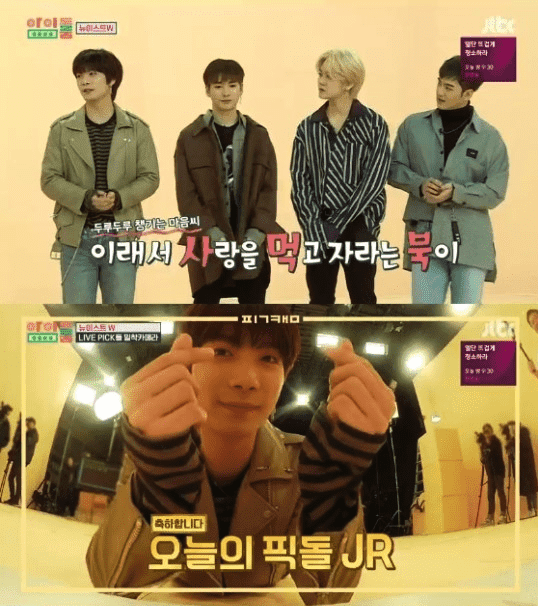 The topic shifted to Aron who appeared on “Problematic Men,” where he talked about how he achieved the top 0.5 percent percentile on the SAT. Defconn said if his parents were against him becoming a singer, and he replied, “There was a lot of opposition at the time. But as I kept talking to them, they told me to do what I liked.”

JR also revealed his knowledge of his members’ minor habits as well as their blood types and horoscopes. Baekho proved he was a “muscle man” by impressively doing 80 push-ups in a minute and recording a forearm circumference of 42 centimeters (approximately 16.5 inches).

Ren, with his unique cooking skills, shocked everyone by offering a unique lunch box dish called “An Emperor Penguin Goes on an Autumn Picnic.” The hosts tried the strange combination of fresh broccoli and melted cheese along with a carrot added in several slices of bread and commented, “It unexpectedly tastes okay.” His members tried it as well and commented, “It’s edible.”

During the broadcast, NU’EST W also challenged themselves to the nano dance challenge with their new song “Help Me.” The order went from JR, Ren, Aron, and Baekho. During the first attempt, Ren hesitated when his turn came and lost the beat. They went for a second attempt, but Ren forgot the order of the nano dance and made another mistake. Then Ren made a small mistake during the third attempt, but they eventually finished successfully.

What was your most favorite moment on this episode?

NU'EST W
Idol Room
How does this article make you feel?