EXID shared stories about their difficulties at the beginning of their debut.

On December 8, EXID appeared as guests on JTBC’s “Ask Us Anything.”

The members said, “We gained a lot of popularity through ‘Up & Down.'” LE, who participated in writing the song and the lyrics, added, “It was like a dream.”

Hyelin said, “It was a time when we talked about what we’ll do if ‘Up & Down’ doesn’t do well. Two years leading up to when ‘Up & Down’ came out, we didn’t have any schedules.”

She continued, “At the time, I ate meals at the student cafeteria, but my members would eat ramen. From what I remember, they ate ramen three meals a day.” Hani added, “I think we’ve tried every type of ramen,” and LE explained, “We didn’t have money.”

Hyelin shared, “There’s a lot of cheap food in front of the school, so I’d buy it and bring it to the members. But that was burdensome for me, so I worked a part-time job without the members knowing about it.” 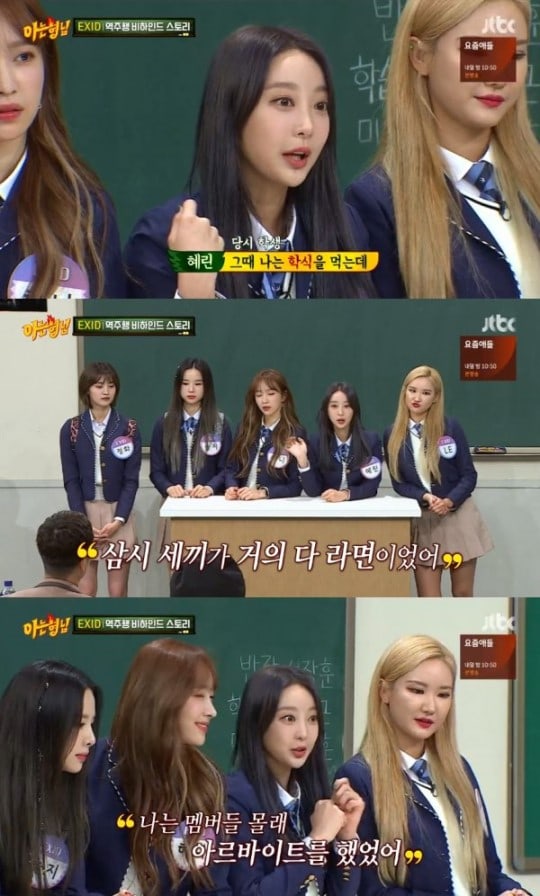 When Kang Ho Dong asked the members when they found out about Hyelin’s part-time job, Hani answered, “She told us way later, after we did well. She suddenly talked about it on the radio. I felt so sorry. I didn’t know and ate so deliciously. We tried not to talk about our own hardships back then.”

Kang Ho Dong commented, “But because you overcame those kinds of difficulties, you became stronger. I suddenly thought of an inspiring quote, ‘There isn’t a night when morning doesn’t come.'”

Super Junior’s Kim Heechul then asked EXID about the motto they followed while overcoming their difficulties. “We have a group motto. ‘If it was fun, then it’s okay,'” answered EXID.

EXID
Knowing Bros
Hyelin
How does this article make you feel?