EXID opened up about Solji’s illness and absence.

On December 8, the girl group appeared as guests on JTBC’s “Ask Us Anything” as a whole group and the cast gave them a warm welcome.

Solji began, “Thank you for inviting us. I was diagnosed with hyperthyroidism. There is no cure. It was really bad at the time. My hands would suddenly shake and my eyes would swell up. I went to the hospital and they said it was hyperthyroidism. I’m now at a normal level, but [the doctors said] it needs constant managing.”

When Kang Ho Dong asked about how nervous the members must’ve been, Solji replied, “The members didn’t even know at first. I didn’t tell them.”

Hani commented, “She was really weird at the time. She was eating so much, but she wouldn’t gain weight. I immaturely said to her, ‘You’re so blessed. You’re such a big eater.’ But it was all because she was so sick.”

Solji continued, “We then went to Vietnam for an event and my [body temperature] surpassed 39.6 degrees Celsius (approximately 103 degrees Fahrenheit). I returned to Korea and announced a halt in activities.” 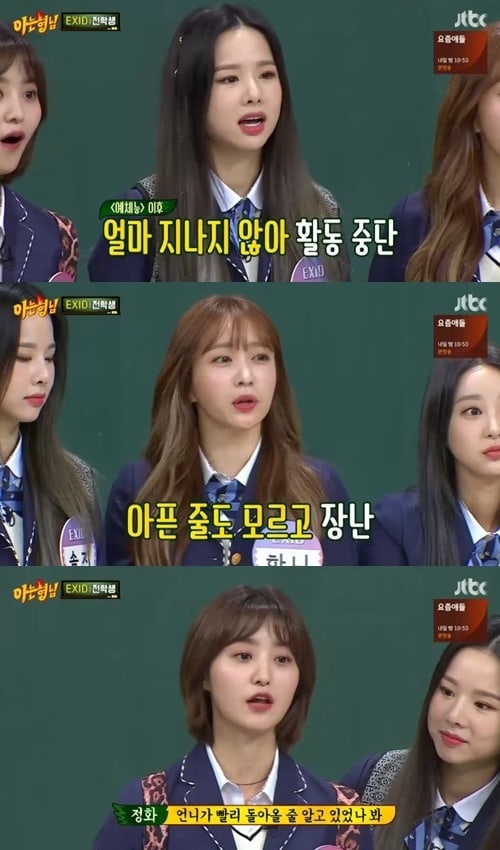 Expressing gratitude, Hani said, “What’s amazing about her is that she monitored all of our performances.” Solji added, “I really wanted to be with them. At the time, they were on a tour, so I appeared as a surprise [on stage].” “We all bawled,” reminisced Hani.

LE explained, “The stage went dark,”while Hyelin added, “On that day, we happened to make many mistakes. Then the stage went dark and music cut out during the last song so I thought, ‘Oh, this is a failure.'”

Jeonghwa commented, “When she was first absent, I didn’t notice a huge difference. I thought that she would definitely return quickly, but as time went by, I could feel her absence.”

EXID
Ask Us Anything
Solji
How does this article make you feel?