TWICE made the “2 Days & 1 Night” cast members smile during a special appearance on the show!

On the December 9 episode of the variety show, Kim Jong Min began operating his café together with Yoon Shi Yoon and Jung Joon Young. However, they had to temporarily close the café after just 50 minutes because they were unable to handle the flood of customers.

After running around advertising their café and eventually resuming business, they were forced to shut down again around an hour later. Kim Jong Min decided, “Let’s close for now,” and the three cast members worked hard to fill all of the backed-up orders. Jung Joon Young and Yoon Shi Yoon complained, “Who’s this dream for?”

Kim Jong Min told the two members, “I’m supposed to take delivery orders from some friends of mine. Just follow me.” He then led them down the halls of the KBS building.

Jung Joon Young followed begrudgingly at first, but he began to smile once he saw that they were standing in front of TWICE’s dressing room. 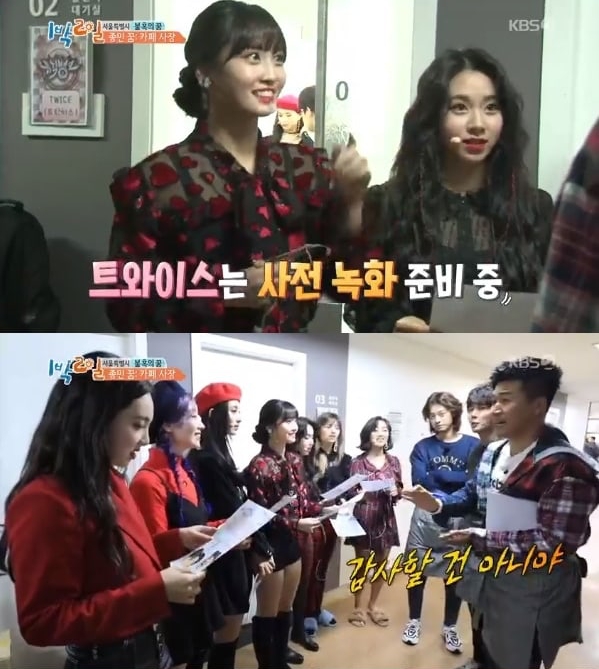 The girl group explained that they were preparing for their performance on “Music Bank,” and Kim Jong Min insisted, “Then you need to drink coffee.” Jeongyeon asked, “Do we have to buy it?” Jung Joon Young replied, “You’re supposed to buy it, but maybe [Kim Jong Min] can pay for it?”

As the TWICE members told Kim Jong Min their drink orders, Sana belatedly joined the group outside, and Jihyo joked, “He’s buying.” Kim Jong Min replied, “Hey leader, let’s clarify this. I’m not going to pay.” Nayeon responded by joking, “[Then] we don’t really have to drink any coffee.”

However, she went on to add, “Of course we’ll pay for it.” After TWICE gave the “2 Days & 1 Night” cast members their orders, Kim Jong Min returned with their drinks and Nayeon handed him a credit card.