With the first episode just hours away, “My Strange Hero” unveiled four key points to look forward to!

The new Monday-Tuesday drama will tell the story of Kang Bok Soo (Yoo Seung Ho), who was expelled from school after being accused of bullying and violence. He returns to the school as an adult to exact his revenge, but instead of getting what he hoped for, he finds himself swept up in an unexpected situation.

The drama boasts of five impressive actors who will lead the drama that include Yoo Seung Ho, Jo Bo Ah, Kwak Dong Yeon, Kim Dong Young, and Park Ah In who will each attract attention with their unique performances.

Yoo Seung Ho, who makes hearts flutter with his deep, soulful eyes, will play a comical romantic who can’t forget his first love and returns to school for revenge. Jo Bo Ah will take the role of his first love Son Soo Jung who will show different sides of her unique character.

Kwak Dong Yeon is playing Oh Se Ho, who has a gentle charm but has an inferiority complex, and is doing his best at his new role as a villain. Kim Dong Young will play Kang Bok Soo’s best friend of nine years and the CEO of “Your Request,” and Park Ah In will be Kang Bok Soo’s cute stalker Yang Min Ji. 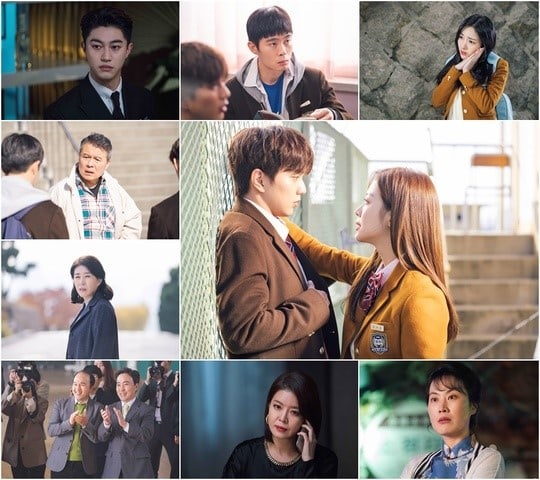 Kim Yeo Jin will play the charismatic mother of Oh Se Ho’s mother while Kim Jae Hwa will be acting as Kang Bok Soo’s sister who has a passion for education. Jang Won Young, who is known for his unique acting, will be teacher Kim Gook Hyun while Jo Hyun Sik from “100 Days My Prince” will play Ma Young Joon, Kang Bok Soo’s classmate who becomes an English teacher at their high school.

3. Silly yet warm romance with both excitement and comedy

Kang Bok Soo and Son Soo Jung first met nine years ago when they were 18 years old. Kang Bok Soo was always last place in high school while Son Soo Jung was the class president and valedictorian. They seem like polar opposites, but they fatefully fall for each other.

Son Soo Jung is known as the goddess of their school. At first, Kang Bok Soo didn’t think of her that way, but after seeing a different side of her, he gradually starts to like her. However, due to “that incident,” a misunderstanding brews between them, and their love never peacefully comes true. However, nine years later, they reunite at their old school and the fire between them ignites once again.

“My Strange Hero” is different from other school dramas that have been released so far. School violence, extreme competition for college entrance exams, and other relatable issues that teenagers face today will be depicted in the drama, but they will not be heavy or provocative. The high school in the drama will divide the students’ ranks based on their gender, which reflects our times of living in a competitive society, but this story will also be a witty one.

Kang Bok Soo, who returned to school after being unfairly expelled from school nine years ago, will change the people around him and solve minor problems at the same time. It will give the viewers a pleasant and exhilarating vicarious satisfaction.

The production crew stated, “‘My Strange Hero’ will capture the excitement of first love and send a social message. Sometimes, it will make people laugh, and at other times, it will captivate the viewers’ eyes, ears, and hearts. Starting from tonight [December 10] at 10 p.m. KST, it will take charge of your Mondays and Tuesdays. Please give a lot of interest to ‘My Strange Hero.'”

“My Strange Hero” will be available on Viki! Check out a teaser below!