“My Strange Hero” has showed its lead characters’ first kiss in new stills!

The drama tells the story of Kang Bok Soo (played by Yoo Seung Ho) who was expelled from school after accusations of violence. To get his revenge as an adult, he returns to his old school where his first love Son Soo Jung (Jo Bo Ah) now works part-time, but he ends up an in unexpected situation. The pair will be showing the development of their relationship as they reunite nine years after being each other’s first love.

In the premiere episodes of “My Strange Hero” on December 10, we got a glimpse of Kang Bok Soo and Son Soo Jung’s high school days together, as well as their dramatic reunion at the end of the episode.

SBS has now shared photos of the couple’s sweet first kiss nine years ago, in their secret place on the rooftop. Kang Bok Soo looks at an award certificate that Son Soo Jung made him and seems happy about it as he jokes with her. The photos also show her leaning in for their first kiss, with Kang Bok Soo looking surprised. 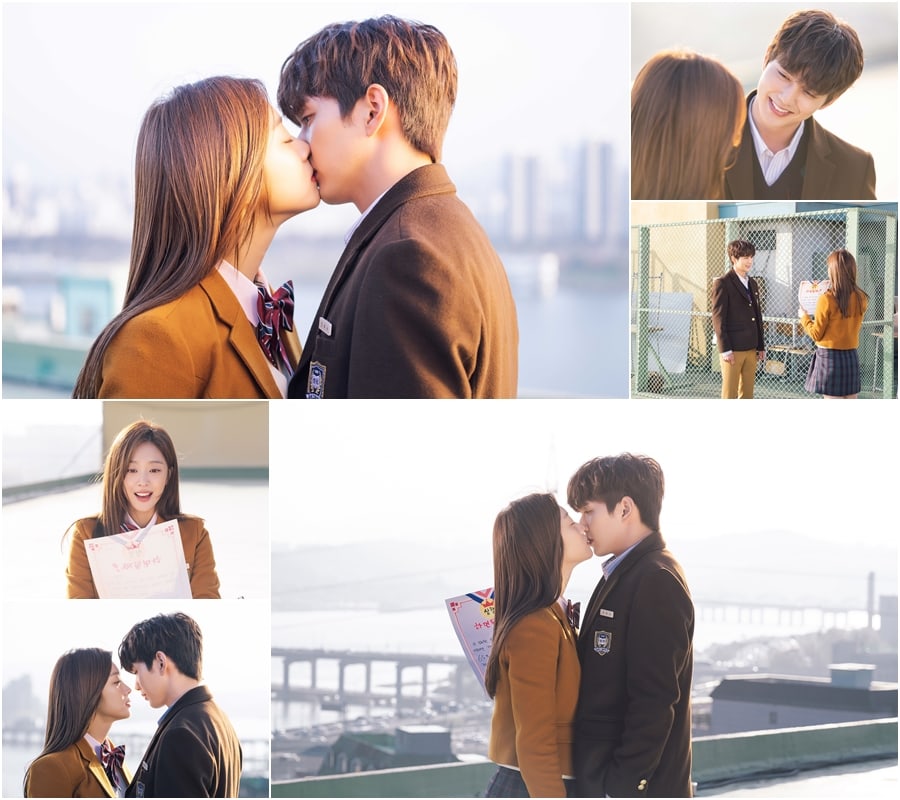 Yoo Seung Ho and Jo Bo Ah filmed the kiss scene on November 10 at a high school in Seoul. It’s described that the two actors were enthusiastic about getting the shot right as they wanted to create the most beautiful version possible of this romantic scene on the rooftop in the sunlight. The actors and the director spent time considering details like where they should stand and the most natural posture. It’s said that when they perfected the kiss scene, everyone on set gave them a round of applause.

A member of the production team said, “Since this is the scene where Kang Bok Soo and Son Soo Jung confirm their feelings for each other, Yoo Seung Ho, Jo Bo Ah, and all the staff worked hard on this scene.” They added that fans should stay tuned to find out why the pair who had shared such a sweet kiss in high school meet as enemies nine years later, and what their story will be.