The drama is set in an alternate reality where modern-day Korea is a constitutional monarchy. Jang Nara plays a young woman named Oh Sunny who marries into the royal family, while Choi Jin Hyuk plays Na Wang Shik/Chun Woo Bin, a man who becomes a royal bodyguard.

In the photos, Chun Woo Bin stands in front of Oh Sunny while maintaining eye contact with her. He tightly embraces her as tears fall from her eyes. When Chun Woo Bin places both of his arms on her, as if to hug her, Oh Sunny looks away from his intense gaze in surprise and shifts her body away from him as well. 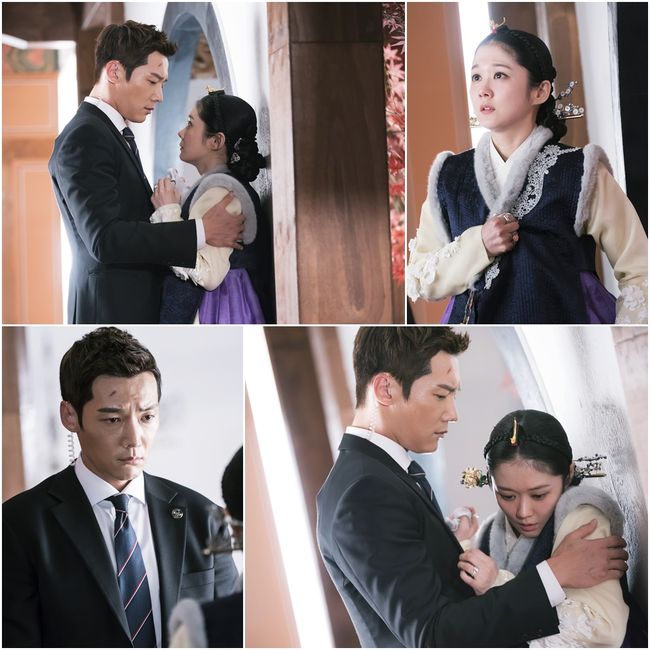 This scene was filmed in Ilsan of Gyeonggi Province. While preparing for their shoot, Jang Nara and Choi Jin Hyuk entered the set completely absorbed into their roles as Oh Sunny and Chun Woo Bin. They rehearsed their scene without rest, working well together as they traded lines and expressed the emotional impact of the scene. The professional actors were able to film their scene without any NG [Not Good] cuts.

The production staff stated, “Because Jang Nara and Choi Jin Hyuk expressed feelings of disappointment to the greatest degree during the ending scene of the last episode, many are curious about this week’s broadcast. Please look forward to see the reason why empress Oh Sunny and royal bodyguard Chun Woo Bin, who are in similar positions of being betrayed, come into contact while maintaining eye contact.”

“The Last Empress” airs every Wednesday and Thursday at 10 p.m. KST and is also available on Viki. Watch the latest episode below!

Jang Nara
Choi Jin Hyuk
The Last Empress
How does this article make you feel?