On December 13, Jo Yoon Hee made her first appearance as the show’s newest MC with ASTRO’s Cha Eun Woo who appeared as a special MC.

Jo Yoon Hee said, “I enjoyed watching ‘Happy Together’ since a long time ago and I appeared many times, so I think of this is an honor.”

She continued, “After having a baby, my confidence fell and I worried a lot about whether or not I could work again. I was worried and my husband enthusiastically suggested that I try being an MC. When I couldn’t gather courage, my husband gave me lots of courage.”

At her first day of filming, her husband Lee Dong Gun and actors Choi Won Young and Oh Eui Sik appeared as guests.

Lee Dong Gun began, “Thanks to Jo Yoon Hee, I earned the nickname ‘pig feet man.’ We ate pig feet together on our wedding anniversary.”

He continued, “After Jo Yoon Hee said this on a variety show, I got some criticism and was called ‘pig feet man.’ This part didn’t air on TV, but on the next day, I found tulips and gifted them to my wife. But that part was edited out and all that was left was ‘pig feet man.'” 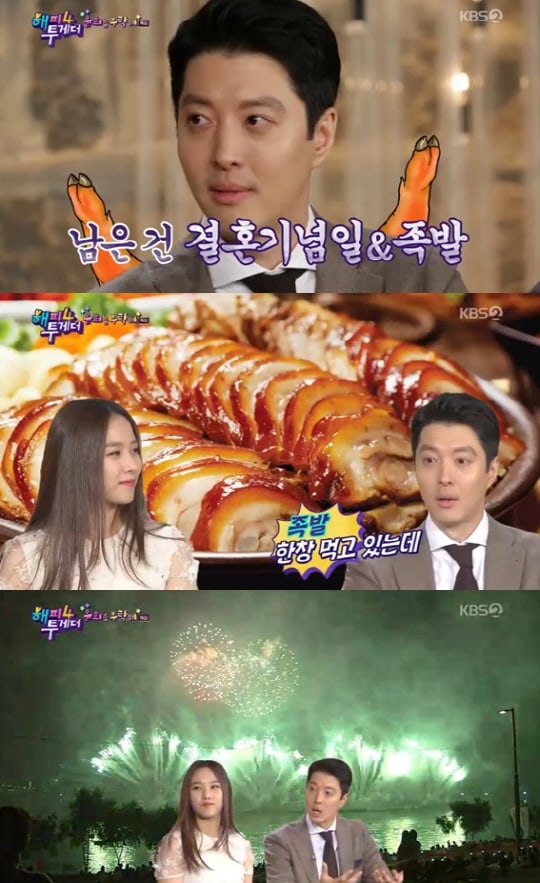 As someone who saw Lee Dong Gun and Jo Yoon Hee when they were dating, Oh Eui Sik said, “Lee Dong Gun took good care of the people around Jo Yoon Hee. He even participated in Jo Yoon Hee’s radio team dinner. It was always the two of them together when she was going home from work.”

He continued, “There was a time the four of us had dinner including my wife, and they held hands until the dinner ended. I thought Lee Dong Gun was left-handed.”

Lee Dong Gun and Jo Yoon Hee expressed their love for each other throughout the show. He said, “When I wake up in the morning and see my wife’s face, I feel a sense of stability that I can’t put into words. I think we’re a married couple that’s head over heels for one another.”

Jo Yoon Hee added, “We appeared as a couple together in the drama, and spending our everyday life together feels like I’m watching a drama. My husband has zero faults. He doesn’t have any bad appearances. His everyday life is like a photo shoot.”

Lee Dong Gun concluded, “My wife can be straightforward. She speaks well in a direct way. I think it’ll be a big plus as an MC. Please take good care of my wife.” 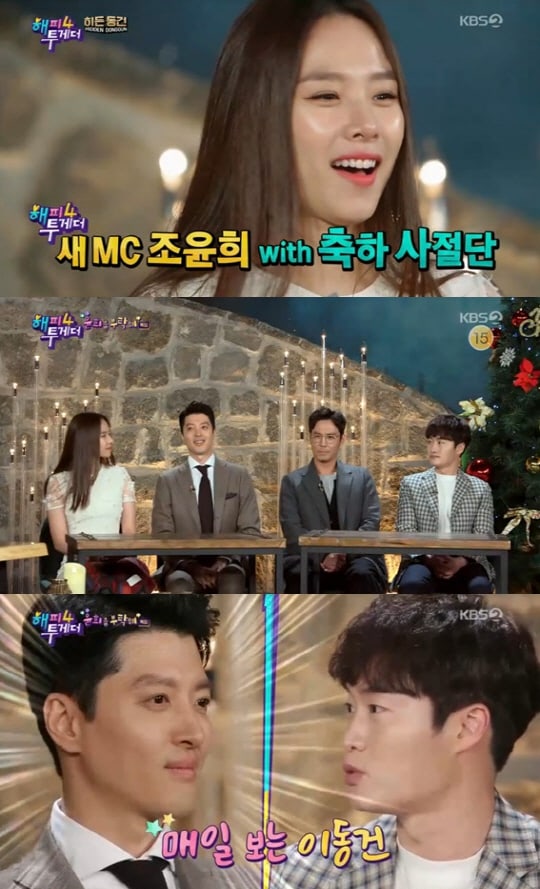 “Happy Together” airs on Thursdays at 11:10 p.m. KST. Check out an episode below!

Happy Together
Jo Yoon Hee
Lee Dong Gun
How does this article make you feel?