The 2018 Mnet Asian Music Awards (MAMA) wrapped up with touching speeches from BTS as they won two more Daesangs (grand prizes) from this year’s ceremony.

On December 14, 2018 MAMA ended with its final show in Hong Kong. Two of the night’s Daesangs (grand prizes) went to BTS, as they received both Album of the Year (for “Love Yourself: Tear”) and Artist of the Year.

When receiving Album of the Year, BTS leader RM first said he wanted to give the honor of the award to all the ARMYs watching around the world. He went on to say, “Also, we’ve received the honor of the Album of the Year award this year. As well as the artists here today, there are also so many great artists who are struggling at this moment to create their albums. I don’t think that we’re receiving this award because we’re better or greater than them. So I want to give the honor to them too.”

He continued, “There is someone I definitely want to talk about today. I think that this is the first time I’ve talked about this in detail. Our producing director Bang Shi Hyuk. When we were trainees who had nothing, you took us and fully supported us, giving us studios, practice rooms, and a dorm, and you believed in our potential. Also, when we didn’t have much to show in 2014, you told us, ‘Even before you debuted, I already thought of you as artists that will win a Daesang, and you will soon become the best group. I believe in you.'”

RM said, “When we came out of his studio, we laughed a lot. We thought, ‘He must be going through a hard time lately.’ People around him also tried to stop him; they thought that such a great composer was putting an end to his career. Yet he believed in us so much when we had nothing, and I want to give this honor to him. We love you and respect you, and we’ll continue to work hard together with you.” 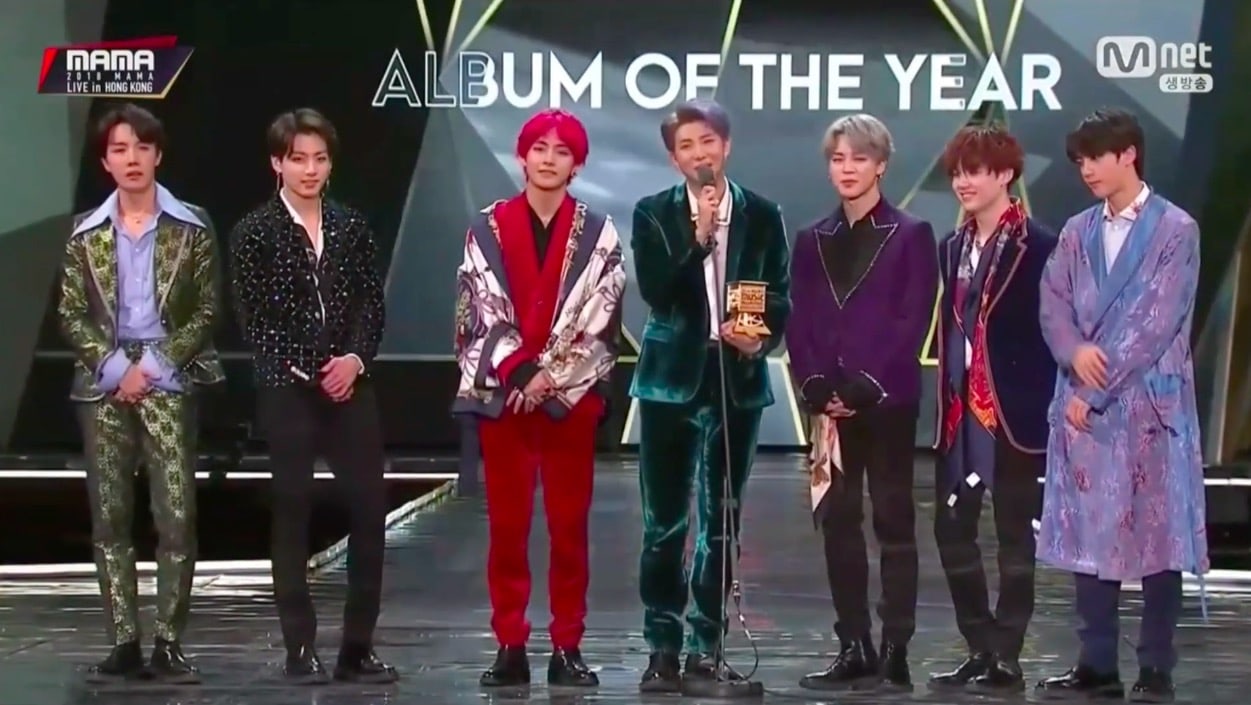 Jungkook stepped up the microphone to first ask fans if they’d enjoyed their performances. He said, “We worked hard to prepare our performances while thinking about ARMY. We’ve received the Album of the Year award today. We really just wanted to become artists that you can be proud of, and it’s the same way now.” He shared that he wants to be a source of comfort and strength for everyone, and added, “In our hearts, ARMY is forever No. 1. Thank you so much, we love you.”

BTS went on to receive the Artist of the Year award, their third Daesang from 2018 MAMA, and the group gave an emotional speech.

J-Hope began by saying, “Before we came up on stage, I was really worried. I want to always show you the best side of me and not make any mistakes, so whenever we’re about to go up on stage, I get nervous as we prepare. This award is really —” He then began to cry, and was unable to continue speaking for a moment.

“I think this year I would have cried whether or not we received this award,” he said in tears. “We went through so many hard times, and we received so much love from all of you, so I really wanted to make up for that. I’m so grateful, and I want to take this opportunity to thank my members who are here with me. Thank you. I love you.” 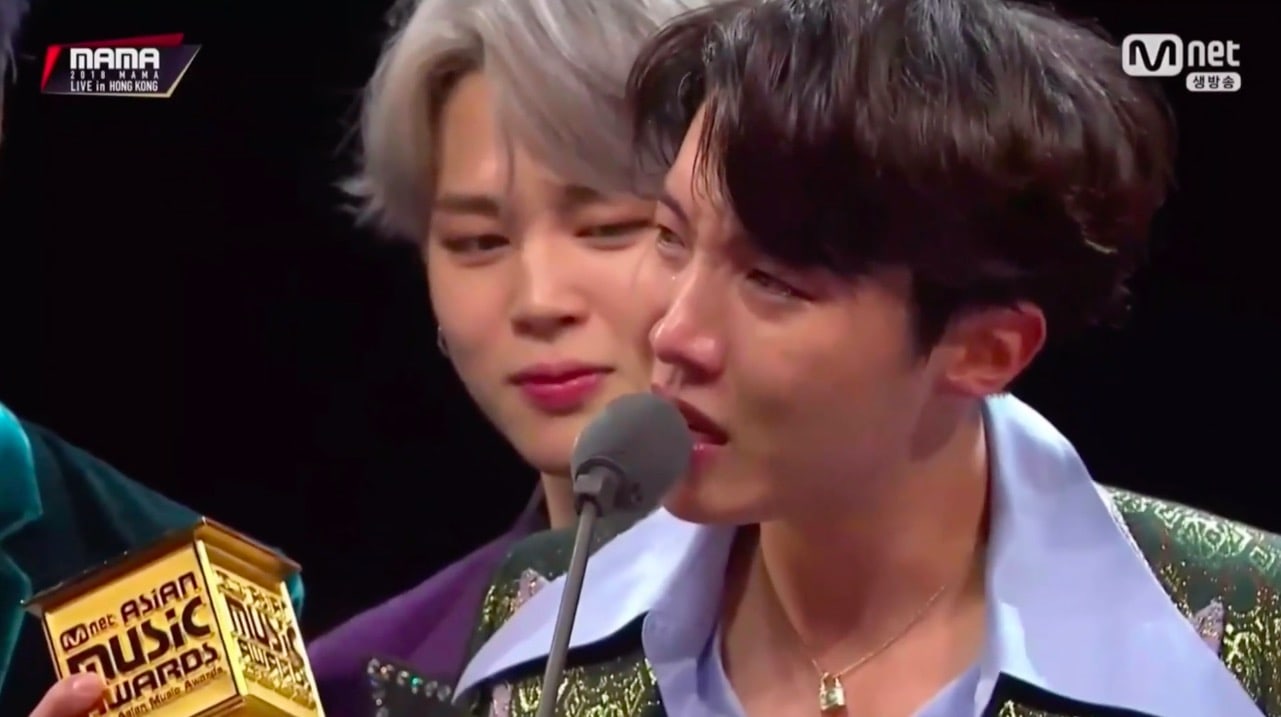 Jimin then took a turn at the microphone and said, “ARMY! Thank you. In the past year, it’s possible that there were some tough things, right? As we went through them, we’d gather together and talk about it, and we were able to look back on things. When we did that, we realized that there are many people behind us and beside us. We wondered when so many people came to be by our side. As we thought about that, we realized that even though it’s hard, we can gather strength and be happy. So I want to say thank you to all of you.”

Jimin continued, “Also, I really wanted to receive this award again in this spot. As I always say, the pride that you have for us is our pride. So next year, we will show you even better sides of ourselves, and repay you again with this award. Thank you. I love you!” 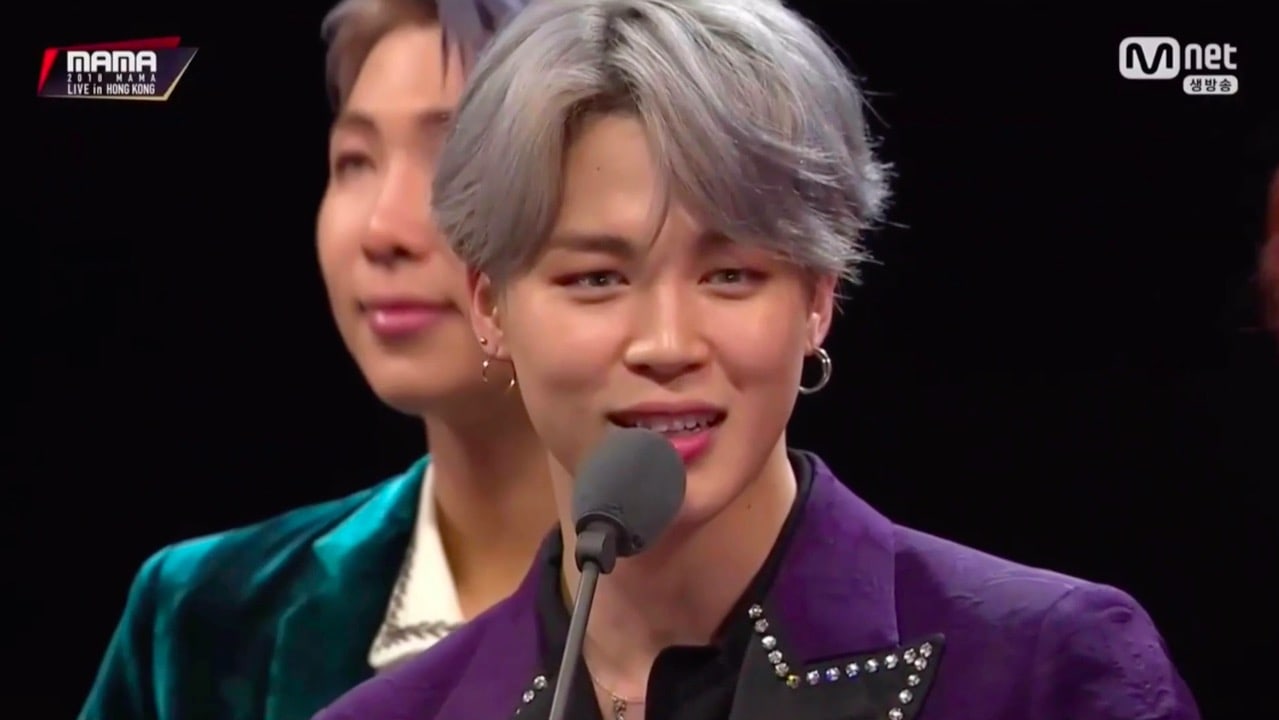 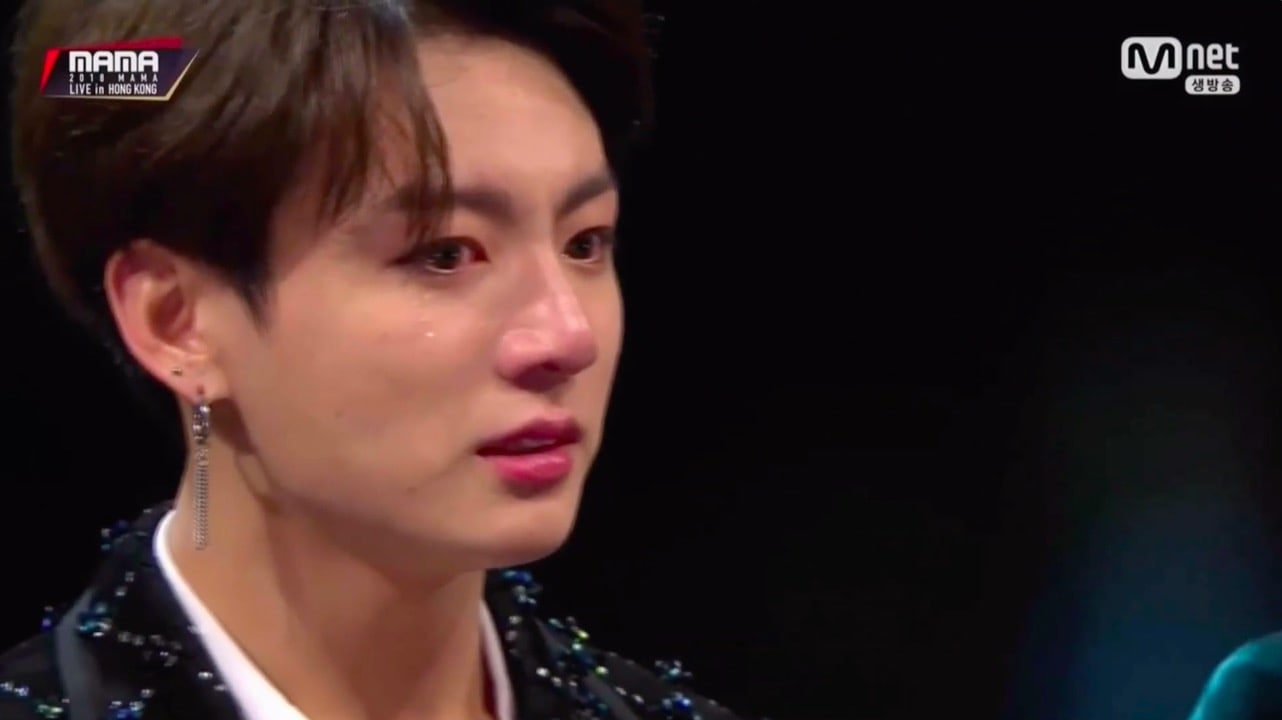 V stepped up to say, “To the members’ mothers and fathers who are watching this, thank you for raising us,” before beginning to cry. “The fact that we’re able to receive this award is unbelievable. I will work hard so that I deserve this award. You give us these great awards at the end of each year. I really feel like even if I were born again, ARMY would be a precious gift to us. Thank you so much, I truly love you.” 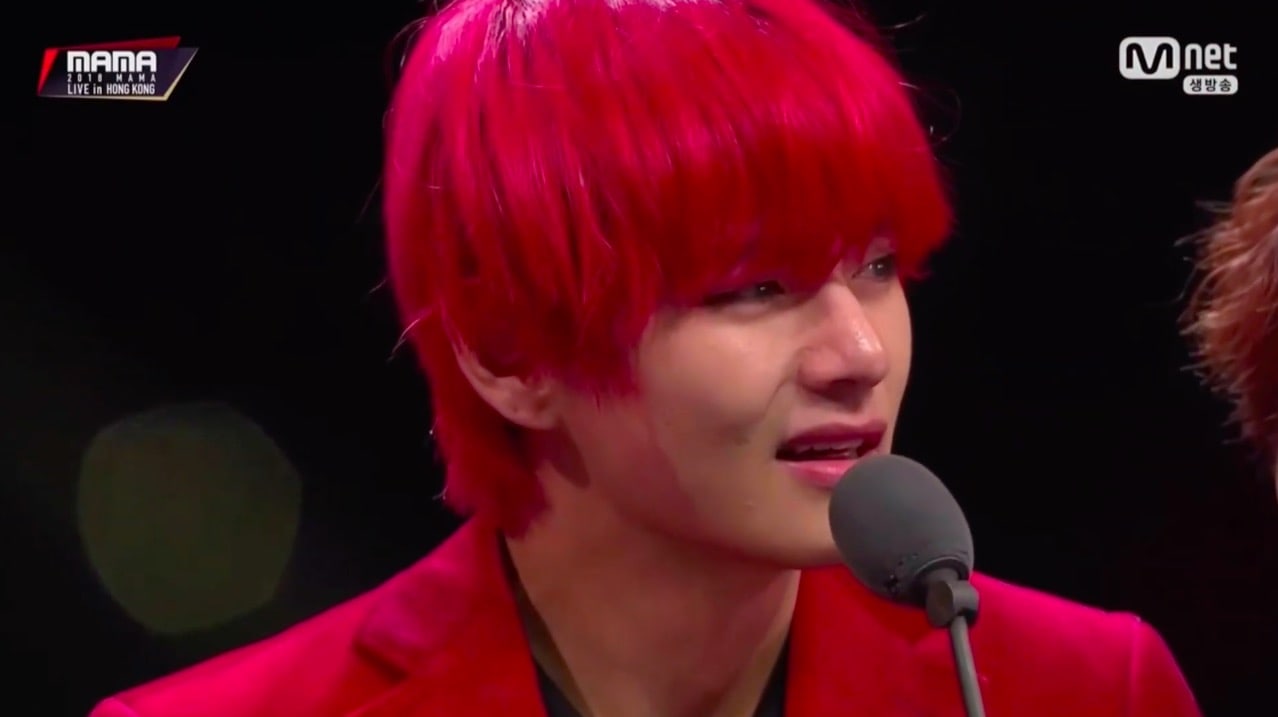 Suga then said, “Thank you, ARMY. I’m so happy to receive the Artist of the Year award. I think of this as an award given to us by the ARMY who always looks over us, and I will work harder. And I want to thank our families who brought these seven brothers into the world. 2018 was a year where I wondered if it was even possible to be this happy in my life. I’ll make 2019 an even cooler and happier year. Thank you.” 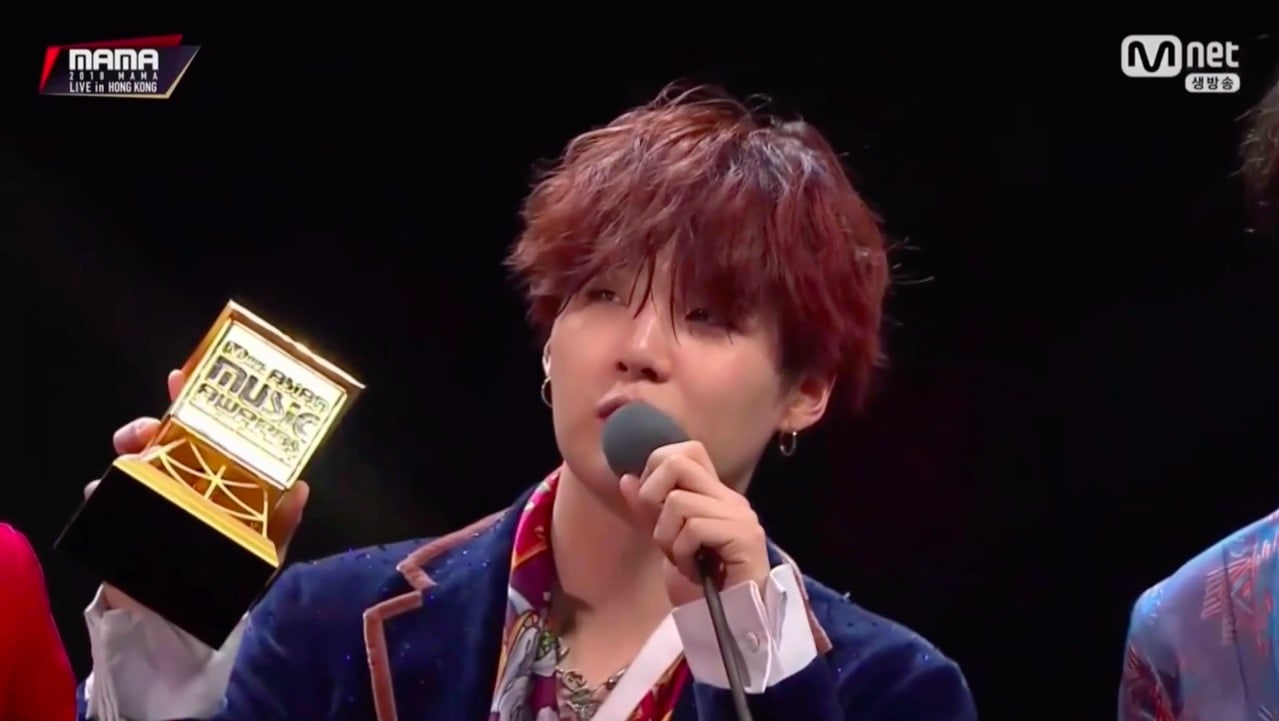 Finally, Jin came to the microphone in tears. He said, “ARMY, I’m thinking about early this year. Early this year, we were having a really hard time mentally. So we talked together and worried about whether we should disband or not. But I’m so relieved that we found our resolve again and now we’re able to have these great results.” As he spoke, V next to him broke down in tears. Jin continued, “I’m so grateful to our members who found that resolve again, and I want to say thank you to my loving members and ARMY. Thank you.” 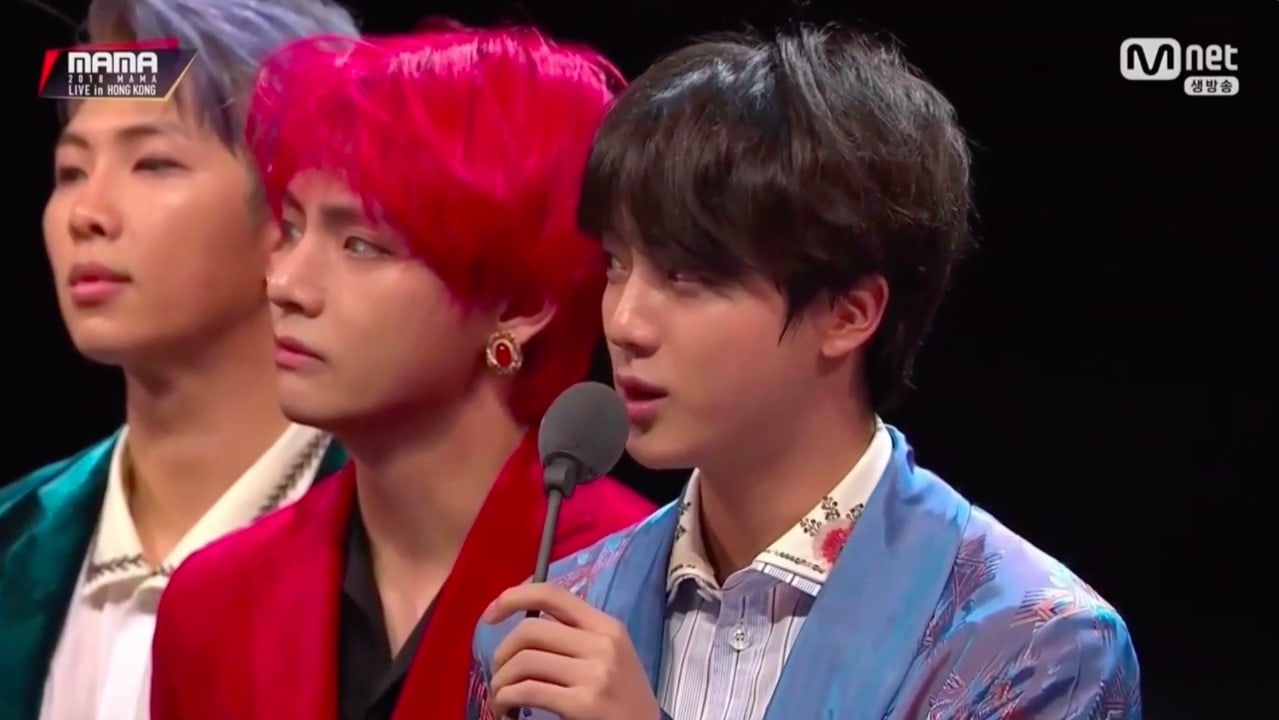 BTS
2018 MAMA
How does this article make you feel?