Kim Jong Min and Hwang Mi Na had nothing but sweet words to say about one another.

The couple participated in their first pictorial together for the January 2019 issue of @star1 magazine where they posed for fun, chic concepts with a Parisian flair.

Kim Jong Min and Hwang Mi Na met on TV Chosun’s reality show “Taste of Dating” (literal title) where they dated for 100 days on-screen. After this “dating contract” was over, they both agreed to date publicly for a year in real life.

The couple said, “It’s our first pictorial shoot together, so we thought it would be awkward. But after posing together and practicing, it was less awkward than we thought.”

When asked about each other’s first impressions, Hwang Mi Na replied, “Kim Jong Min is very manly and smart. When I talk with him, I think about how he’s wise and sensible.” Thinking back to his first time meeting his girlfriend, Kim Jong Min said, “She was so pretty that I fell in love at first sight.”

There is a 14-year age gap between Hwang Mi Na and Kim Jong Min, but they said that they don’t feel a generational gap. Kim Jong Min said with a laugh, “My appearance is only old. My mental age is quite low. Hwang Mi Na is quite mature, so she matches well to my mental age.”

About the first time they formed feelings for one another, Hwang Mi Na answered, “Kim Jong Min monitors a lot when I do the weather forecast. I fell for him seeing how he took care of me even during his busy schedule.”‘ 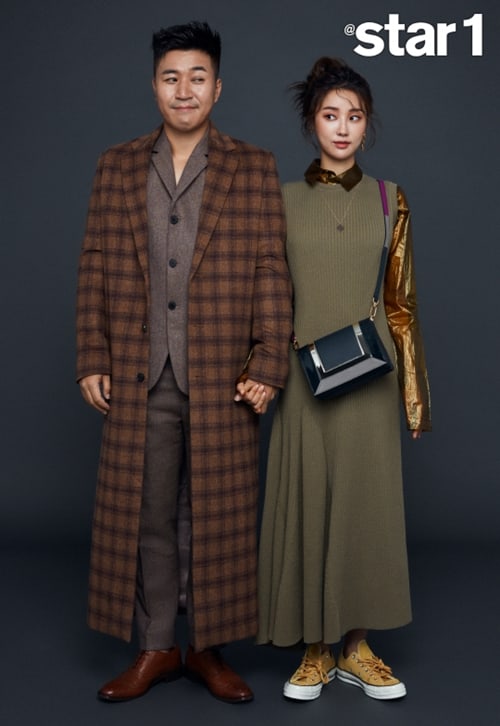