Watch: HAON Turns Into Shy Fanboy In Front Of TWICE

Rapper HAON revealed that he’s a big fan of TWICE!

On the December 16 episode of JTBC’s “Cool Kids,” the cast split up into three teams—Yoo Jae Suk and Han Hyun Min, Ahn Jung Hwan and HAON, and Kim Shin Young and Red Velvet’s Seulgi—to find out what kids are up to these days.

After meeting up with the members of a club who love eating salmon, Ahn Jung Hwan and HAON ran into TWICE, who happened to be filming another program at the same location. Ahn Jung Hwan said, “I kind of know TWICE,” and he took the club members to meet the group.

HAON, who is usually a charismatic and powerful rapper on stage, turned into a shy fanboy in front of the girl group. TWICE greeted HAON and Ahn Jung Hwan with high fives, and Ahn Jung Hwan explained, “We came over because HAON is such a big fan of TWICE.”

When Nayeon sang a verse of HAON’s “Barcode,” the “High School Rapper 2” winner rapped his song together with her. Overwhelmed with joy, HAON ran around the field before getting on his knees and pumping his fists in the air. 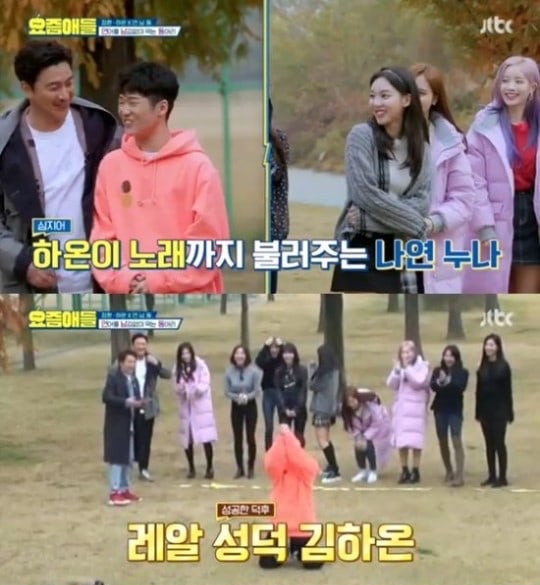 Ahn Jung Hwan then revealed, “HAON likes Dahyun.” HAON shyly walked over, got a hug from his bias, and said thank you multiple times without being able to look her in the eye.

Afterwards, HAON said, “I came to respect Ahn Jung Hwan even more. I was able to meet TWICE thanks to him.”

Check out the clip of HAON meeting TWICE below!

“Cool Kids” is a new variety show in which adults watch videos created by kids and then choose the kids they want to spend the day with. The show airs on Sundays at 10:20 p.m. KST.

TWICE
HAON
Cool Kids
How does this article make you feel?