“Radiant” tells the story of a woman who lost time before she got to use it all and a man who lives his brightest days by doing nothing and wasting them away. It will be a fantasy drama that follows the lives of two people who live in the same time, but also live in completely different times. 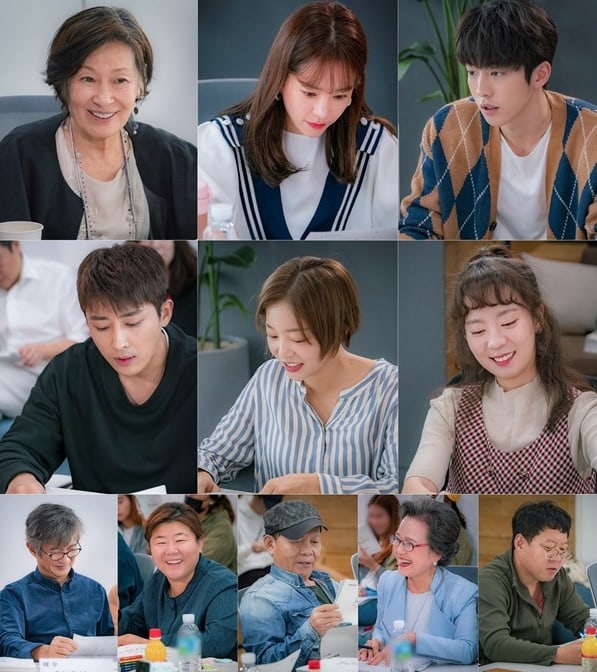 Kim Hye Ja and Han Ji Min showed different synergies with the same character. The two actresses will both be playing the role of Kim Hye Ja, a woman who finds herself with the ability to travel through time. They portrayed the positive and loyal character with different charms. Kim Hye Ja and Han Ji Min, who had to closely follow the emotional lines of the character, carefully checked each other’s lines throughout the script reading and performed wonderful acting.

Kim Hye Ja, who will act in a fantasy romance for the first time since her debut, is in her 70s, but her soul is 25 years old, heralding a dramatic transformation. She completely immersed into her character and also showed unique chemistry with Nam Joo Hyuk.

Han Ji Min also put on an attractive performance by breaking down her character as an aspiring announcer who is equipped with an infinite positive mind. From realistic, empathetic acting that attracts the audience, Han Ji Min is already Kim Hye Ja. She, too, showed great chemistry with Nam Joo Hyuk.

Nam Joo Hyuk will take on the role of Lee Joon Ha, who wishes to become a reporter. The actor, who has broadened his acting spectrum in various works, showed calm yet deep acting. He perfectly portrayed the ups and downs of his character, and viewers are already anticipating his new role.

Son Ho Jun will play Kim Hye Ja’s older brother Kim Young Soo, who isn’t bogged down by time and is full of mischief. He showed off his cool and deft charm by causing everyone to laugh with his delightful and humorous acting. He is expected to create sibling chemistry with both Kim Hye Ja and Han Ji Min.

The production crew stated, “This is a special and ‘Radiant’ combination. It was script reading where the delicate acting of the actors was overwhelming. The actors’ passionate performances of the dense script and the already complete characters provide a pleasant smile and warm empathy. Special acting synergies from Kim Hye Ja and other actors are expected to lead the highly mature work.”

“Radiant” began filming in October and is expected to air in 2019.