On the December 20 episode of TV Chosun’s “Taste of Dating” (literal title), Kim Jong Min made reservations at a restaurant. He rehearsed the song that he was going to sing in front of Hwang Mi Na, but he kept getting the words wrong and his voice was not in good condition.

Watching the footage at the studio, fellow Koyote member Shinji said, “Kim Jong Min’s throat condition isn’t good these days.” She joked, “There’s a common characteristic amongst sub-vocals. They get ambitious about singing. I have a feeling that today’s event will 100 percent be a failure.”

During the rehearsal, Kim Jong Min also put up a photo of him and Hwang Mi Na. After he was done preparing, he asked her to come to the restaurant and she showed up not having a single clue about the event.

He was nervous before his “concert” and the song began to play over the speakers. Hwang Mi Na was surprised and burst into laughter when she caught wind of what was happening. Kim Jong Min began offbeat, didn’t know where to place the tablet, and the music suddenly stopped playing.

Hwang Mi Na assuringly told him, “Start from the second verse,” but he couldn’t even press play on the tablet. Hwang Mi Na got up to help him, but he told her that he would be done soon.

An employee stepped in to help and Park Sung Kwang commented, “It’s playing out like how Shinji imagined. It’s not that he’s bad at doing it. He just can’t do even 1 percent of it.” Kim Jong Min then restarted his surprise event from the beginning. Park Na Rae added, “This is reality. A perfect event only occurs in dramas or movies.”

During his second attempt, Kim Jong Min sang the song a bit quickly, but Hwang Mi Na looked at him in the eyes and sang along with him. 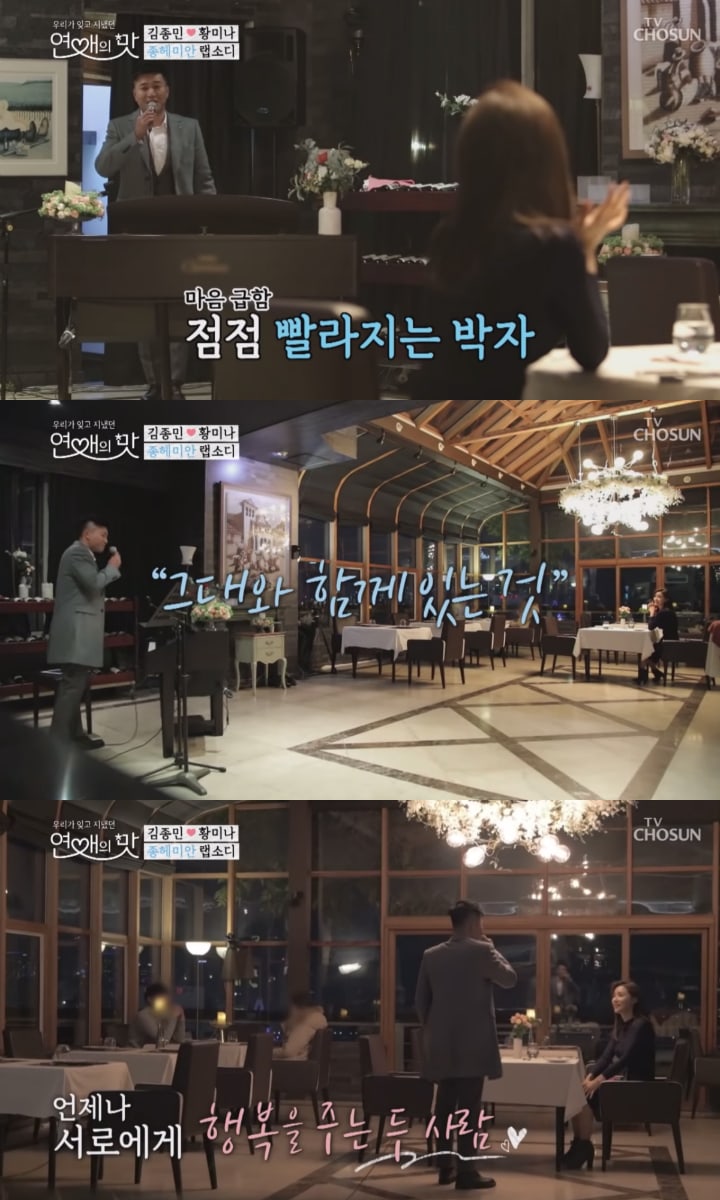 After the song ended, Kim Jong Min confessed, “I did well during rehearsals, but became nervous. I wanted to do a better job for you,” and she reassured, “I was moved and it was fun.” She then asked, “Was your phone call with Defconn all an act?” When he said yes, she replied, “You’re good at acting.”

Hwang Mi Na continued, “I think there are things I don’t want to forget while being with you. There are many times where I think that I want to remember this for a long time and hope that it won’t go away. Today is like that too.” Kim Jong Min told her, “To be honest, I really enjoyed it. There was never a moment that I wasn’t happy. I liked the fishing hole too.”

While eating fondant au chocolat, Hwang Mi Na found something in her dessert. Scooping up the ring with her spoon, she asked, “What’s this?” On their previous date around Konkuk University, he had made her try on different kinds of rings. Kim Jong Min then took out a ring box and put the ring on her left fourth finger. However, it was too small and he put it on her pinky instead.

Hwang Mi Na then cleaned the ring she found from the ice cream with her napkin and put that ring on Kim Jong Min’s finger, but it was a little loose. She said with a laugh, “Something is always a little off,” and he added, “If you can’t wear it for work, put it next to your bed.” 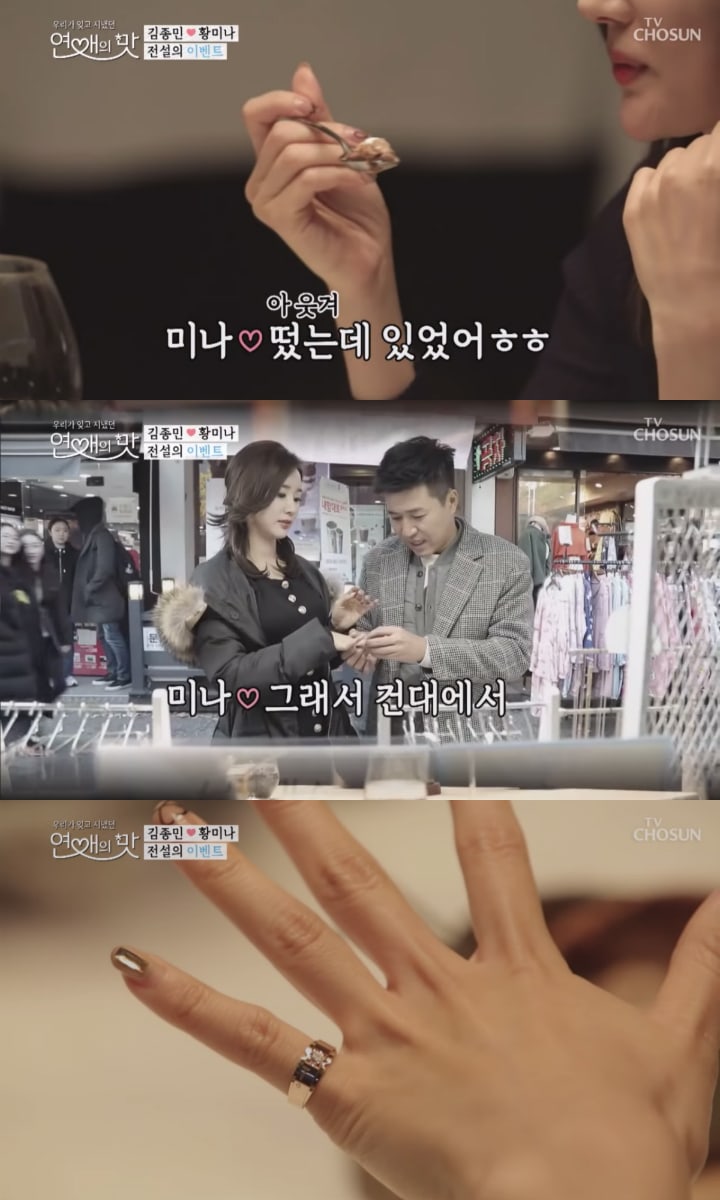 Hwang Mi Na replied, “This is so pretty. We have so many memories.” He added, “It’s the real beginning now.” Kim Jong Min then handed her a big bouquet of flowers. He told her, “This is the hoary stock. It means forever love,” before giving her a hug.

Kim Jong Min
Hwang Mi Na
How does this article make you feel?