“Swing Kids” is receiving lots of love from the public! After receiving favorable reviews, the public became interested in the 1950s Geoje city prison camp in which the film takes place. Not only are people curious about the accuracy of the movie, but they are also comparing the movie to historical photos from real life. 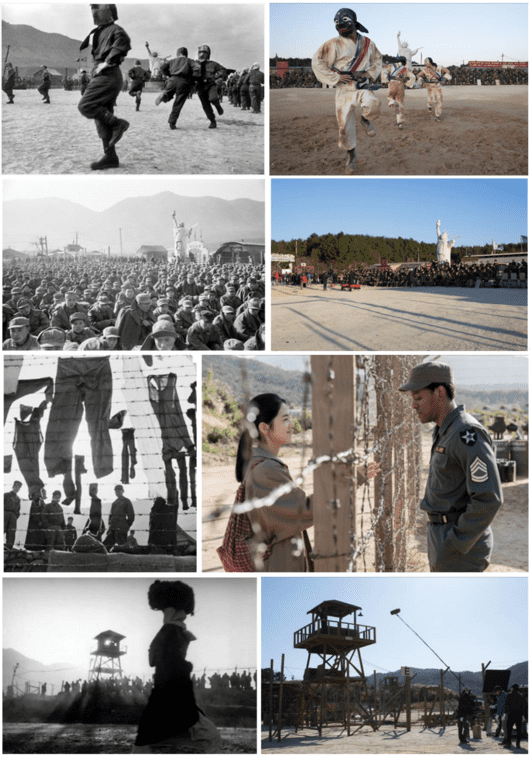 Viewers were surprised to discover that there was a perfect overlap of the photo of the masked prisoners of war dancing with the statue of liberty in the background and a scene from the movie. Not only did netizens try to guess what occurred in real life by analyzing the photos, but they also expressed curiosity on whether the events that occurred in “Swing Kids” were real or not.

Furthermore, the film accurately portrayed details including the barracks, common place areas, barbed wire, and livelihoods of the prisoners of war. This sparked online responses in which people shared information that they knew about the era.

“Swing Kids” has captivated audiences with the vividness and realistic portrayal of the Geoje city prison camp gained by thorough verification, research, and consultation with experts. The film has become even more meaningful for having reignited interest for the Geoje city prison camp used in the Korean War, which was not as well-known in the past. The film has also sparked interest for revealing that Werner Bischof’s photo of the prisoners of war dancing with masks on was one of the beginnings of the film “Swing Kids.”

Viewers who have seen the movie have shared knowledge of the era along with comments such as, “The one photo by Werner Bischof that gave birth to the film ‘Swing Kids,'” “If you have background knowledge before watching ‘Swing Kids,’ it’ll be easy to relate to the film,” “‘Swing Kids’ has been released. The background is the Geoje city prison camp during the Korean War. They made the situation more approachable.”

The end-of-the-year film “Swing Kids” has sparked interest from people of all generations as it received positive reviews and became a hot issue for delivering a special story using the Geoje city Prison camp as the background. With its unique and creative story telling, relatable content, and fresh synergy from young actors, “Swing Kids” is receiving an explosive response from a diverse audience.

Swing Kids
How does this article make you feel?