After the revelation that actor Son Seung Won is currently under investigation for driving under the influence and without a license, musical actor Jung Hwi revealed that he was the anonymous passenger in the vehicle mentioned by news reports.

Jung Hwi apologized on December 26 via his Instagram and stated that he will be stepping down from his current musicals, “Rimbaud” and “Poongwallju.” 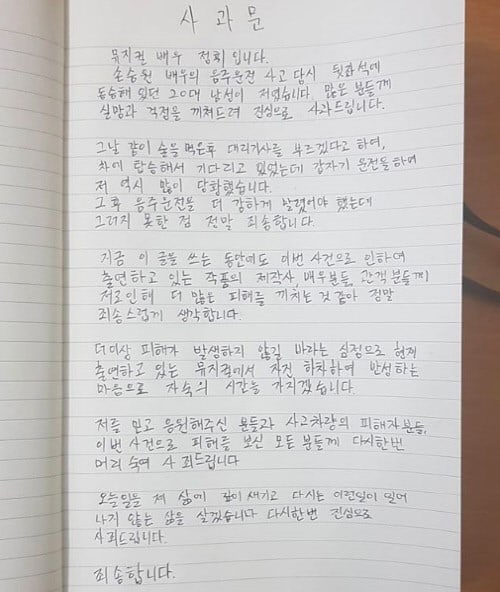 At the time of Son Seung Won’s drunk driving accident, the man in his 20s in the backseat was me. I sincerely apologize for disappointing and causing concern to so many.

That day, after drinking together, I said I would call a driver and was waiting in the car, but when [Son Seung Won] suddenly started driving, I was very surprised.

After, I should have done more to stop him, and I apologize for not being able to.

Even as I write this, I feel as if I’m causing harm to the production company, actors, and audience members of the project that I am currently a part of, and I’m sorry. In order to prevent any further damage, I will be stepping down from the musical I am doing and will be taking time to reflect on my actions.

Once again, I bow my head in apology to those who trusted and supported me, the victims in the collision, as well as everyone who has been affected by this incident.

Previously, in the early morning on December 26, Son Seung Won crashed his car into another vehicle while driving with a blood alcohol content level of 0.206 percent, enough to get his license canceled. However, the actor’s license had already been canceled due to a drunk driving incident in September. The actor is currently appearing in the musical “Rimbaud,” and the production staff are discussing a casting change.

Jung Hwi
XPN
Son Seung Won
How does this article make you feel?