TV Chosun’s new drama “Tower of Babel” is about the romance between a prosecutor who has thrown away his life for revenge and an actress whose life gets ruined after marriage. The mystery melodrama will focus on the ugly truth behind a murder case and fights for power within a conglomerate family.

Park Shi Hoo will take on the role of Cha Woo Hyuk, a newspaper reporter that has transformed into an ambitious prosecutor who has learned that he can’t achieve his goals by being straightforward; he sometimes has to hide his inner feelings. Viewers are excited to watch Park Shi Hoo’s performance in “Tower of Babel” as he’s become known as the “Park Shi Hoo you watch with trust” for not having disappointed in any of the projects he has taken on. 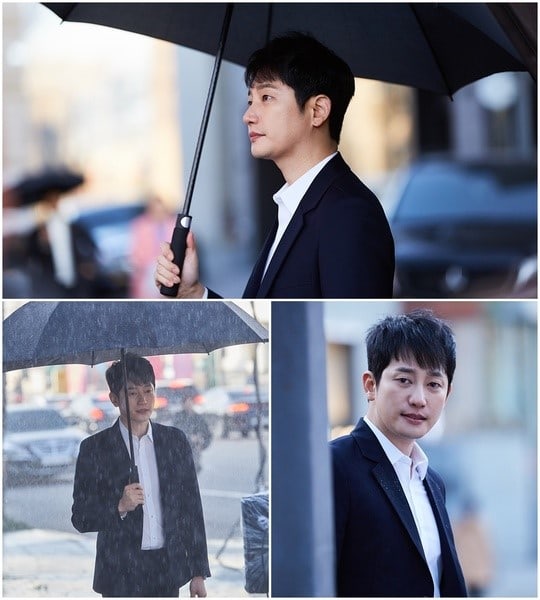 The newly released stills show Park Shi Hoo’s charisma as he stands in the pouring rain. Cha Woo Hyuk is walking hurriedly through the rain to grab a taxi when he gets hit by a spray of water from a passing car. Cha Woo Hyuk looks furious as he becomes completely soaked in the clean-cut black suit he is wearing. Viewers are excited for his character who has a calm appearance, but fiery personality.

The filming of the raining scene took place on November 28 on a street in Gangnam District in the neighborhood of Apgujeong. Park Shi Hoo conversed in-depth about the scene with director Yoon Sung Shik before going through rehearsal. He finished his first filming perfectly by showcasing immersive acting that made the scene seem real.

After finishing the first filming, Park Shi Hoo said, “Cha Woo Hyuk as an ambitious prosecutor has pain from the past, and he’s a character with a lot of background story. After reading the script, Cha Woo Hyuk came off as a very charismatic character that even I could fall for.” He added, “The first time [filming] felt very good because the staff prepared in detail and were very considerate. I have hopes that the viewers will also be able to feel this good energy and will love the drama a lot.”

The production staff said, “The charm actor Park Shi Hoo has and the charm character Cha Woo Hyuk has showed off a perfect synergy even from the first filming. Please be excited to watch ‘Park Shi Hoo you watch with trust’ transform into an ambitious prosecutor.”

“Tower of Babel” will premiere on January 27!

Park Shi Hoo
Tower of Babel
How does this article make you feel?