“The Last Empress,” which started off with a viewership rating of 7 percent at its premiere on November 21, has grown impressively to a rating of 16.1 percent on December 26.

Along with this impressive growth, viewers have coined the new term “MonTuesSoonOkKim Day” to describe writer Kim Soon Ok’s impressive writing skills (Soon Ok Kim sounds similar to SooMokGeum, which is WedThursFri in Korean). The combination of Kim Soon Ok’s writing skills and director Joo Dong Min’s detailed and bold directing skills seem to be the reason behind the success of “The Last Empress.” Not to mention, all the characters have stories of their own that makes the drama even more interesting. 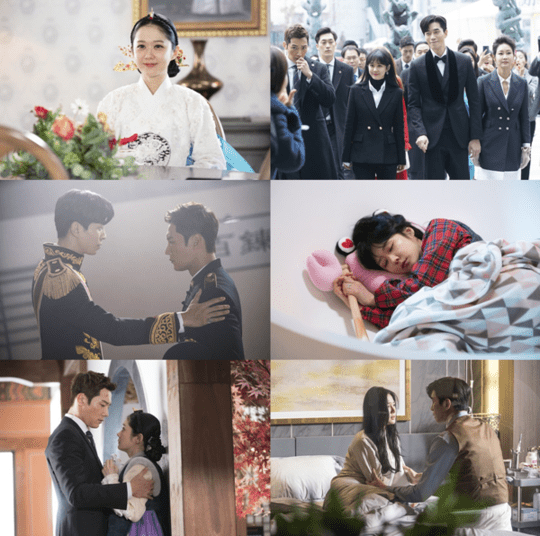 Oh Sunny (Jang Nara) initially seems like a very poor, unknown musical actor, but she does a complete 180 after becoming the Empress. Grand Empress Dowager (Park Won Sook) also makes the drama more interesting as she struggles to discover the truth after being accused as a murderer.

When Chun Woo Bin (Choi Jin Hyuk) was Na Wang Sik (Tae Hang Ho), he loses his mother Baek Do Hee (Hwang Young Hee) to a hit-and-run accident by Lee Hyuk (Shin Sung Rok) and gets betrayed by Min Yoo Ra (Lee Elijah), the person he loved and trusted. After becoming the imperial guard, he slowly plans to destroy the royal family and get revenge on the two.

Emperor Lee Hyuk, after being traumatized when he was young by his father (Song Jae Hee), is becoming even more twisted after losing Queen So Hyun (Shin Go Eun). Currently, his younger sibling Crown Prince Lee Yoon (Oh Seung Yoon) has appeared, making him feel threatened, and he keeps having a change in heart due to his overbearing mother, the Empress Dowager (Shin Eun Kyung), Oh Sunny, Min Yoo Ra, and Seo Kang Hee (Yoon So Yi).

In Min Yoo Ra’s case, she wants to delete her past by going as far as killing Baek Do Hee, and is plotting all sorts of things to be by Emperor Lee Hyuk’s side. Min Yoo Ra continues to show her evil colors by reaching out to the Empress Dowager, who had until recently overpowered her.

The production team said, “‘The Last Empress’ has continued to rise in viewership ratings because each of the characters, both main and supporting, have a narrative and have the power to make the story.” They added, “Please look forward to watching the drama as the characters become more alive, pulling viewers in, especially with Oh Sunny, Chun Woo Bin, Lee Hyuk, and Min Yoo Ra at the center.”

“The Last Empress” airs every Wednesday and Thursday at 10 p.m. KST. Watch the latest episode below!