V was born on December 30, 1995, and after midnight KST on his birthday this year, hashtags to celebrate the big day shot up the list of worldwide trending topics on Twitter. As of 12:40 a.m. KST, some of the highest trending topics worldwide included #WE_PURPLE_V, #SingulariTaeDay, #TaehyungMayYouShineBright, #OurMultiTalentedTaehyung, Kim Taehyung, #HAPPY_VIRTHDAY, and TaeTae. 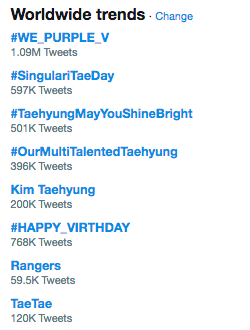 Jimin also tweeted some photos with V. He wrote in the caption, “Our Taehyung, happy birthday. You worked hard this year too. I want to upload an embarrassing photo, but if I do hahahahaha it seems like you won’t want to see me again so hahahahaha. Hyung loves you a lot.”

J-Hope has also shared some pictures with V from their travels. He wrote, “My dongsaeng, our Taehyung, happy birthday.”

Have a great birthday, V!