On the December 29 premiere, Miyawaki Sakura, Kang Ho Dong, Kwanghee, Kwak Dong Yeon, and Lee Chung Ah got to know one another.

She confessed that she learned about Kang Ho Dong the day before filming. She said, “I studied while watching variety shows. I recognized you because your face is cute,” and tried to speak with him in Korean.

Kwanghee asked, “Aren’t you living in a dorm? What’s it like living with 12 people? Speak honestly. I lived with nine people and it was really hard.”

The IZ*ONE member replied, “To be honest, it’s a little difficult. I like being alone.” Kwanghee commented, “There’s no space to be alone. Put the blanket over you.” 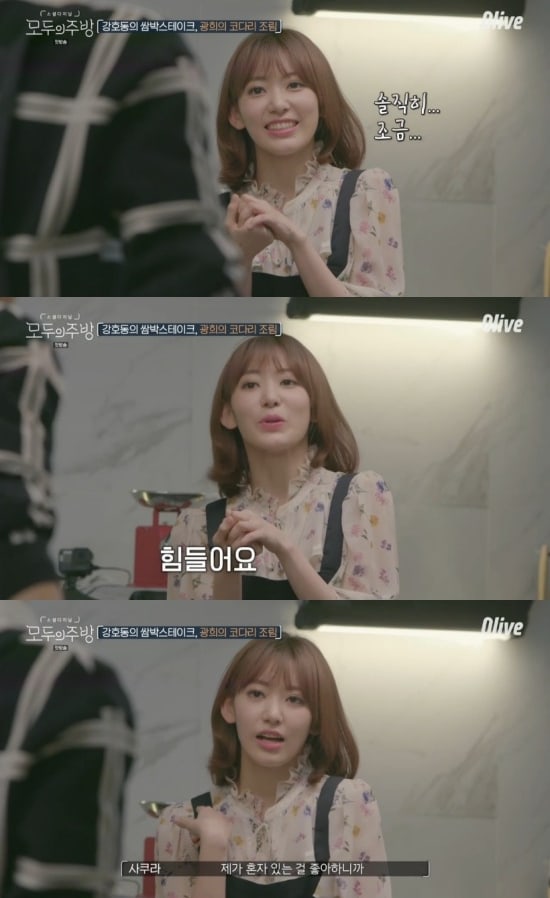 Miyawaki Sakura also asked Kang Ho Dong about his married life. When she asked him if his son his smart, Kang Ho Dong replied, “He’s 10 years old. I don’t know if he’s smart, but he’s bigger than Sakura. Si Hoo would probably be the second heaviest person here.”

Kang Ho Dong then asked the IZ*ONE member on her thoughts behind participating in Mnet’s “Produce 48.” “I’m promoting as an idol in Japan, but I didn’t like being satisfied with that,” she explained. “I wondered if I could find another side of me if I went somewhere new and thought that I should return to the beginning.”

On her parents’ reactions, she said, “They worried a lot because it’s my first time living abroad, but they’re now watching me promote and are cheering me on.”

Miyawaki Sakura
IZ*ONE
How does this article make you feel?