On the January 1 broadcast of MBC Every1’s “Video Star,” Lee Sa Gang and BIGFLO’s Ron, whose wedding is coming up on January 27, told all about their relationship, marriage proposal, and more.

Lee Sa Gang said she feels pretty calm about the whole affair, but that Ron is extremely excited. Ron said, “For things like our wedding photo shoot and going to officially register as a married couple, I was so nervous. I’m so happy I can’t sleep. Even now, I’m so excited and nervous.” 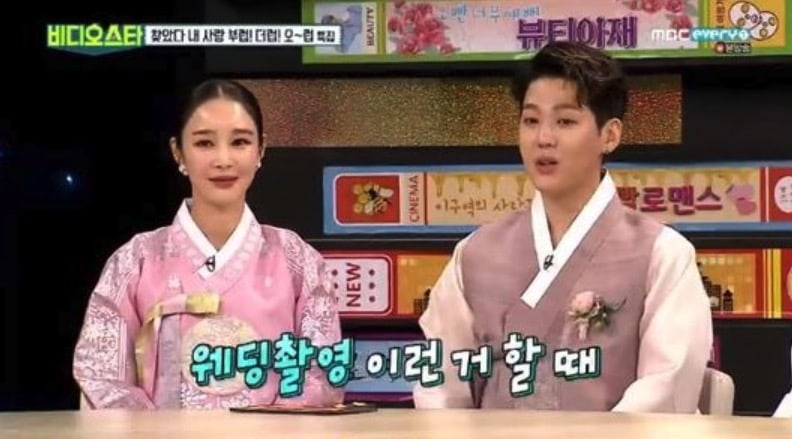 Though their wedding ceremony will be held later this month, the couple are already legally married, having registered their marriage on November 26.

Ron said he fell for Lee Sa Gang at first sight at the Bucheon Fantastic Film Festival. “Lee Sa Gang came in a dress, and I just fell in love. It was love at first sight like Romeo and Juliet. I thought that day that I would need to become a prince. But then her seat was right next to mine.”

BIGFLO’s Euijin is the reason their wedding became public knowledge. Ron said, “We decided to have our wedding photo shoot with the members, and Euijin hyung had a conflicting broadcast schedule. He told the writers of the show he was on that he had to go to a wedding shoot for one of his members. Him asking for his schedule to be changed was what started it all.” 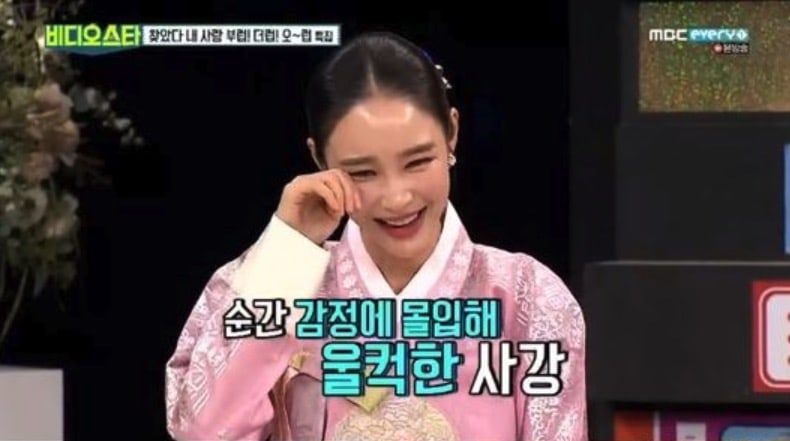 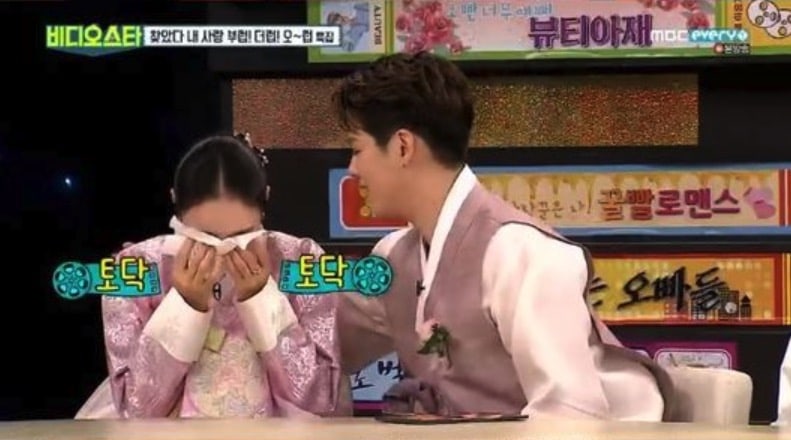 On how Ron proposed to her, Lee Sa Gang said, “We were in Shanghai on vacation, and on the second day, I got a sty. Ron was with me in bed, and he said, ‘Will you live with me forever?’ and told me he would love me forever.”

Lee Sa Gang continued, “Ever since then, I keep crying, like I am now.”

At the beginning, Lee Sa Gang’s parents were against their relationship, due to their 11-year age difference. “My mom was really concerned, and she didn’t like it, but thankfully, there have been a lot of couples with age gaps.” 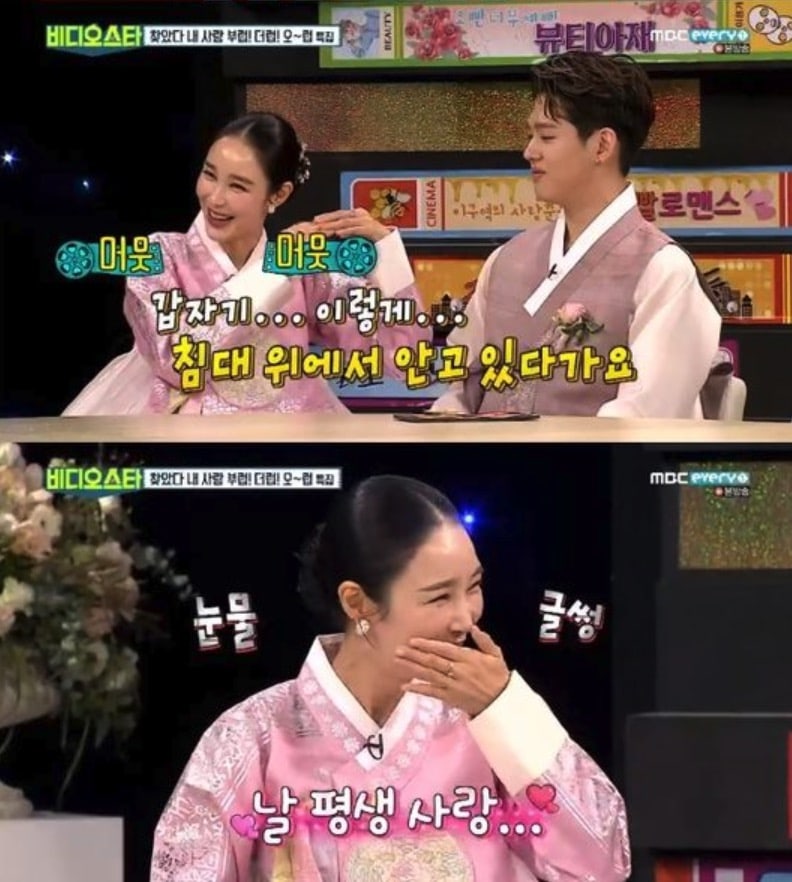 BIGFLO’s Euijin made an appearance on the show. He said that when he first heard the news about their marriage, he thought about BIGFLO’s fans. However, said Euijin, “Thinking about the ordinary person Cheon Byung Hwa rather than the idol Ron, I thought it was good news. When he was going through hard times, Sa Gang noona was there for him. Dating Sa Gang noona, Ron has a newfound ease about him, and he’s found his smile again.”

Ron has changed a lot, down to the way he laughs. Euijin said, “He was my only drinking buddy, but after he met Sa Gang noona, he just quit.”

In a message to fans, Euijin said, “Please give lots of love to Ron as a member of BIGFLO, as the man Cheon Byung Hwa, one woman’s husband, and the head of a household. I hope you won’t be sad. You can come to me.” 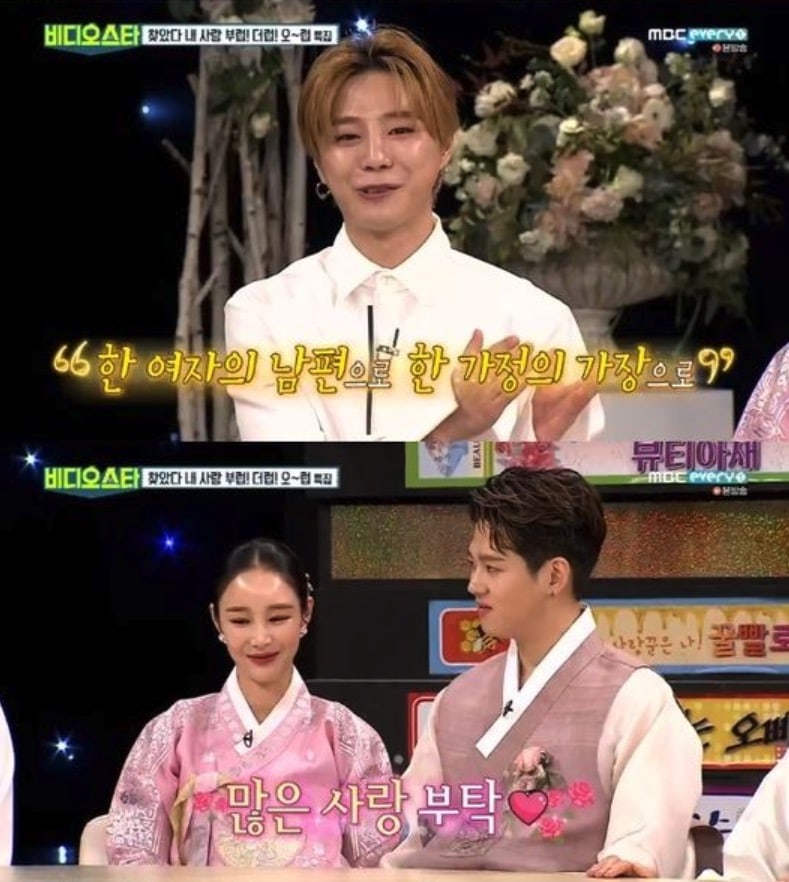 The couple doesn’t have plans for any children at the moment, although they revealed that they are asking people around them for advice.

Ron, whose mandatory military enlistment is coming up, said, “It’s not going to be right away, but in one or two years, I’m going to have to go. We’ve talked about it, and [Lee Sa Gang] said she would wait for me.”

Following the “Video Star” broadcast, Lee Sa Gang posted photos from her wedding photo shoot with Ron and some members of BIGFLO, saying, “Now that we’ve revealed our relationship on television, I’m posting on Instagram. Thank you to my forever friend Tae Hwan for the amazing photos. Thank you to Euijin, Hyuntae, Sungmin, and Lex.”