With tvN’s “Encounter” entering its second half, what will become of Song Hye Kyo and Park Bo Gum’s romance?

The drama has followed Cha Soo Hyun (Song Hye Kyo) and Kim Jin Hyuk (Park Bo Gum) on their journey from meeting in Cuba to reuniting at the Dong Hwa Hotel in Korea. The latest episode showed the pair sharing their first romantic kiss, and interest is high to see how their romance will unfold.

Here are three things to look for as “Encounter” begins its second half of the story.

Soo Hyun – Jin Hyuk become lovers! Where will their romance take them?

People are excited to see how Cha Soo Hyun and Kim Jin Hyuk’s romance will progress as they fall deeper for each other every day. Cha Soo Hyun initially tried to keep her distance from Kim Jin Hyuk, but she couldn’t push down her feelings for him anymore as he approached her with a sincere heart. They’ve gone from being interested in each other to being in a relationship, and their sweet moments are making viewers’s hearts race. Their first kiss in the recent episode has signaled the start of a beautiful romance. 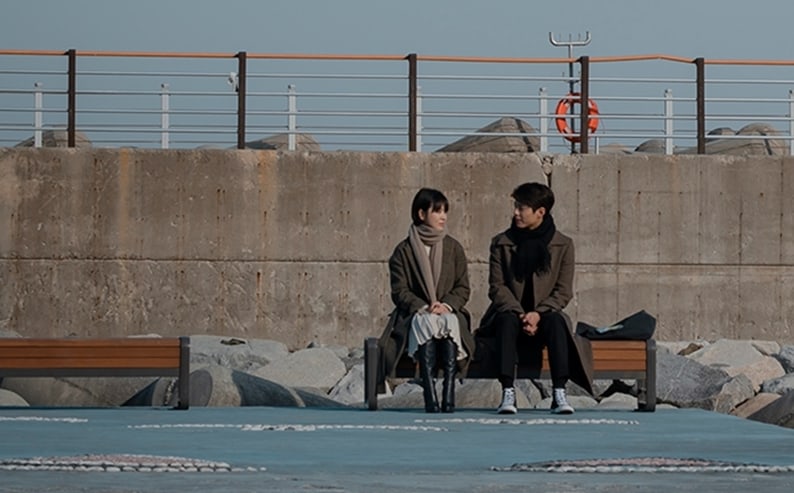 Soo Hyun, will she be able to hold on to Dong Hwa Hotel?

People are on the move to take Dong Hwa Hotel away from Cha Soo Hyun. She received the hotel as alimony when she divorced Jung Woo Seok, and she poured her heart and soul into the place to bring it back to life, expanding the business from what it once was.

However, Cha Soo Hyun’s position in the hotel is being threatened by people like Chairman Kim and Director Choi (Park Sung Keun). Chairman Kim has been trying to back Cha Soo Hyun in a corner, hiring reporters to write scandalous articles about her so that she will step down from the hotel and focus on being a housewife for Jung Woo Seok. Meanwhile, Director Choi has not only been assisting Chairman Kim in her endeavors, but he has also separately been trying to drive Cha Soo Hyun out so he can take her place. With Cha Soo Hyun being in such a high-profile position, it will be interesting to see if she can protect both the Dong Hwa Hotel and her relationship with Kim Jin Hyuk.

Jin Hyuk, will he be able to return to Seoul from Sokcho?

Kim Jin Hyuk was forced to move to Sokcho per Chairman Kim’s orders. Hearing from Director Choi that the rumors surrounding him and Cha Soo Hyun were negatively affecting her, Kim Jin Hyuk decides to go down to Sokcho in order to protect her. The two are lost in sorrow and longing as they are ripped apart just as their relationship is beginning to bloom. Viewers are curious to know when Kim Jin Hyuk will return to Seoul.

The production staff of “Encounter” stated, “Today’s episode will have hearts racing as Cha Soo Hyun and Kim Jin Hyuk’s relationship becomes stronger. The story will follow the various obstacles that stand in their way, and the process they go through as they try to overcome their hardships. Please give the second half of ‘Encounter’ your interest and support.”

“Encounter” airs every Wednesday and Thursday on tvN at 9:30 p.m. KST. Catch up with the latest episode below!