f(x)’s Luna teared up at her members’ messages of support.

On January 3, Luna connected with her fans through a special Naver V Live broadcast promoting her upcoming solo comeback track, “Even So.”

Luna began her V Live by answering fans’ many questions. One of the questions asked when f(x) would be making a comeback, and Luna responded, “I will first work hard on making my own music.”

Luna also made a bucket list for 2019 and mentioned f(x)’s comeback third in the list with a question mark, thus raising fans’ expectations. Luna then cutely added, “Many people are hoping for f(x)’s comeback, right? I’m also hoping for it.” Other than f(x)’s comeback, Luna’s bucket list included things such as Luna winning first place [on a music show], eating hotpot, traveling to Croatia, and graduating.

Luna then went on to read stories she had received from fans, giving them advice about everything from winning lottery numbers to adopting animals.

The highlight of the V Live was when Luna received messages of support from her members, who are far away. She began tearing up once she saw Victoria’s and Amber’s sweet videos. Luna was extremely touched by her members’ messages and commented, “Did I just Facetime with my members? Or was this pre-recorded?” She then went on to show her love for the f(x) members by saying, “I totally miss my members. I’m very thankful to them. We are all actively promoting in our own countries right now, so let’s reunite and repay our fans’ love.” 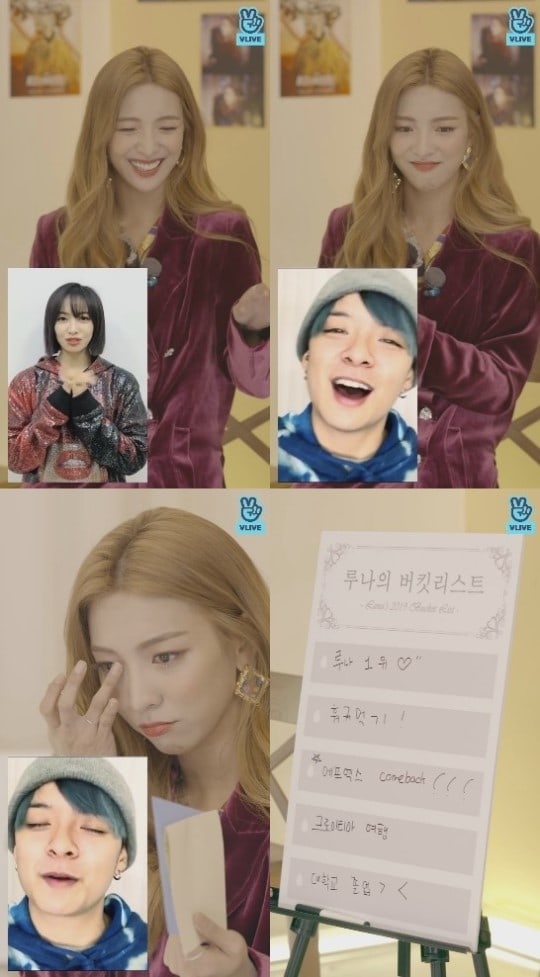 Luna then sang a live rendition of one of the songs on her album called “BYE BYE.” After finishing her performance of the song, Luna commented, “I’m usually not that nervous when I sing my songs, but I don’t know why I’m so nervous right now.” She later told the story of how she got her pet dog and talked about the message of love and care for abandoned animals in the song.

Afterward, Luna introduced her solo title track “Even So.” “I hope you gain comfort through this song when needed. It’s okay. You can cry. Come to me when you feel better. I will always be there for you.” She also introduced another one of her songs, “Do You Love Me,” by dancing to it on the spot.

Luna also answered the question, “How do you write your songs? Do you have a secret method?” by stating, “I write a diary entry every night. I write about what I felt and learned that day. “Even So” was written based on a diary entry I made back in December 2017. Many sad things were happening at that time. I wanted to have something that could comfort me whenever I felt down.”