Yoo Yeon Seok and Son Ho Jun have a lot in store for their donation variety show “Coffee Friends.”

The show was inspired by a donation project the two friends ran in 2018, where they gave free cups of coffee in exchange for donations in any amount. Throughout the run of the program, Yoo Yeon Seok and Son Ho Jun will run a cafe on a tangerine farm on Jeju Island, donating all their profits. While living in a trailer, they will prepare the drinks themselves as well as make various brunch foods.

Yoo Yeon Seok brought up the inspiration behind the first event and talked about how the show came to be, saying, “Last year around this time, I was thinking about how I could donate, and I wanted to participate in donations using a food truck and moving my body around. I procured a coffee truck, didn’t worry about the locations, and went around to receive donations. I wanted people to know that they could donate the amount of a meal or a cup of coffee. However, it was difficult securing locations and dealing with the changing environment. I was so happy that the opportunity to volunteer in one place at Jeju Island came along.”

Son Ho Jun added, “We thought it would be good if we did it together and had fun, so we started the ‘Coffee Friends’ project. It was hard to secure a location, but the production staff said they would set up a cafe for us on Jeju Island, so we decided to have fun while donating. But it wasn’t as easy as expected. It was hard, as we weren’t fully prepared. I don’t know how fun it will be on the show, but it was really hard on Jeju Island.”

The show’s first guests included Choi Ji Woo and Yang Se Jong. Following their footsteps will be Jo Jae Yoon, TVXQ’s Yunho, B1A4’s Baro, and their other close friends. Yunho, in particular, stepped in once for Yoo Yeon Seok’s “Coffee Friends” project — before the TV show — when the actor was unable to attend due to filming for “Mr. Sunshine.”

Yoo Yeon Seok shared, “For the donation project, beginning with Baro, others such as Yunho, Lee Kwang Soo, Sandara Park, and Yoo Byung Jae participated. Lee Kwang Soo is really tall and his head touched the ceiling of the truck when he stood up, so it was hard. We spontaneously contacted Choi Ji Woo and Yang Se Jong. It wasn’t filming, but the actual running of a business. They were such a huge help that I don’t know what we would have done if it weren’t for them.”

Son Ho Jun remarked, “I remember Yunho well. He’s the type of person that’s passionate and doesn’t like to lose, so he didn’t even want to lose during the donation project. We got the most donations when Yunho appeared. He asked how much we had gotten when the other guests came. We’re thankful.” He added, “Yunho came to help again. I think it’ll be funny. He came with a plan. Because business flowed differently than what we expected, I think it’ll have an unexpected kind of fun to it.” 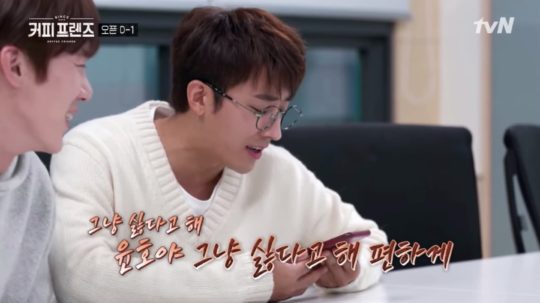 During the first episode, Son Ho Jun revealed that the guest he first wanted to get on the show was Yunho. The pair called him to ask about his availability, but Yunho appeared to be quite busy with concerts in Japan, drama filming, and more. Son Ho Jun joked, “You know, you can just say you don’t want to come.” It appears that Yunho was able to put aside some time to help his friend out in the end.

“Coffee Friends” PD Park Hee Yeon commented, “PD Na Young Suk helped a lot from the beginning production stages as well as in advice for filming.” When asked about the differences between “Coffee Friends” and “Kang’s Kitchen,” which also operated an establishment on Jeju Island, the PD explained, “Though the restaurant atmosphere is similar, we are bringing what the two friends used, including the food and drinks they personally researched. We also have friends that they personally invited, so it’ll be different from preexisting variety shows.”