Jo Bo Ah and Kwak Dong Yeon’s relationship has taken a turn for the worse on “My Strange Hero.”

“My Strange Hero” is about Kang Bok Soo (played by Yoo Seung Ho) who was expelled from his high school after being framed for bullying. He returns as an adult to get revenge but is swept up in further incidents. Jo Bo Ah plays a teacher named Son Soo Jung, who is Kang Bok Soo’s first love, while Kwak Dong Yeon plays Oh Se Ho, the board director of Seol Song High School.

Previously, Son Soo Jung heard Kang Bok Soo’s sincerity for the first time in nine years, and asked Oh Se Ho about the rumors surrounding her and the events that occurred on the roof nine years ago. Oh Se Ho told her that he had heard the rumors from other students then, and lied once again that Kang Bok Soo had pushed him on the roof. Son Soo Jung became angry and stated clearly, “You say we should just cover up the past now, but I don’t think I can do that unless I know the truth. This is the third time we’ve eaten, we’re through.”

Though Son Soo Jung had said she was done with Oh Se Ho, in the recently unveiled stills, she sees him at a cafe. While she coldly glares at him, he responds with a cool look as well despite having confessed his feelings openly to her in previous episodes. 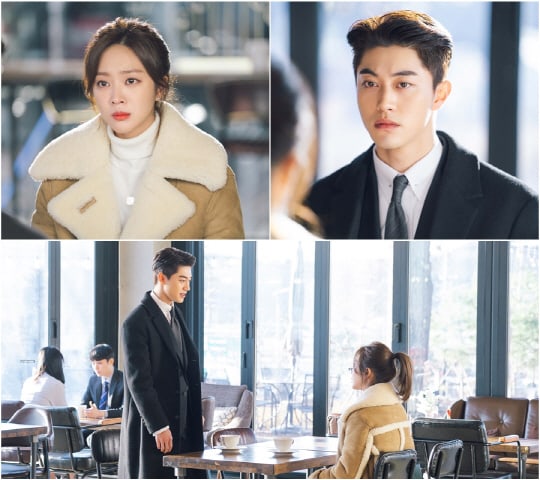 The two actors reportedly worked cheerfully together during the shoot, and thanked the staff members for working despite the cold weather. Before filming, they sat down with director Ham Jun Ho and discussed with him on how to bring up the right emotions for the scene. They passionately put their energy into the rehearsal and conveyed Son Soo Jung’s suspicious gaze and Oh Se Ho’s tender yet suddenly cold look.

The production staff stated, “As Kang Bok Soo and Son Soo Jung’s misunderstanding was resolved, the two begin to fall in love. Oh Se Ho’s love for Son Soo Jung will start to go downhill. As he will do whatever it takes to get what he wants and even lie, please look forward to how Oh Se Ho will act.”

“My Strange Hero” airs every Monday and Tuesday at 10 p.m. KST.

If you haven’t already, check out the latest episode below:

Kwak Dong Yeon
Jo Bo Ah
My Strange Hero
How does this article make you feel?