BTS has earned another Daesang to their name!

Held at the Gocheok Sky Dome on January 6, the second day of the two-part 33rd Golden Disc Awards recognized achievements in the physical album releases category.

BTS was awarded Album of the Year (Disc Daesang), as well as Album Division Bonsang, NetEase Music Golden Disc Popularity Award, and U+ Idol Live Popularity Award. They also won Bonsang in the digital music category and the 2019 Global V Live Top 10 Best Artist award during the first day of the award ceremony, which took place on January 5 at recognized digital releases. In all, they took home six awards across both days of the 33rd Golden Disc Awards.

Leader RM first expressed, “First of all, without a doubt, I would like to dedicate this honor to all the ARMYs who are currently watching this moment. Thank you. I was really happy in 2018. It was a year where we could see the hard work we put in since before debut come to fruition. Many generous and honorable words and terms were also used to describe us, BTS. To be honest, those descriptions were a little excessive, burdensome, and also felt heavy. That’s why, I feel that we may have had a hard time because of those many descriptions at the beginning of last year. I think we felt dejected, wondering if we were overfilling our plate, past our ambitions, if this was really what we wanted.

“If you think about it, I think it’s each to their own when it comes to names and descriptions. I feel like many people may have been shocked or horrified when they first heard our name ‘Bangtan Sonyeondan‘ [Bulletproof Boy Scouts]. The group name was actually decided back in 2010, and we’ve said this before, but we hid our name until we debuted. If someone asked what it was, we used to say, ‘It hasn’t been decided yet.’ However, the name Bangtan Sonyeondan, or Bangtan, or BTS, is quite natural now, isn’t it? It suits us well, right? That’s why, we will work hard to live up to those many descriptions that gave us a hard time. If we do better, I believe that those generous and humbling descriptions will someday seem as natural and fitting as our group name BTS.

“Really, thank you. After we first received Rookie of the Year [at the 28th Golden Disc Awards in 2014], our wish was to receive a Bonsang the following year. It took us four and a half years to receive our first Daesang [here] and now we’re standing here right now. We see ourselves as merely borrowing this position. We will continue to sincerely work hard with each other and our agency and never act in an embarrassing or arrogant manner. I love you.” 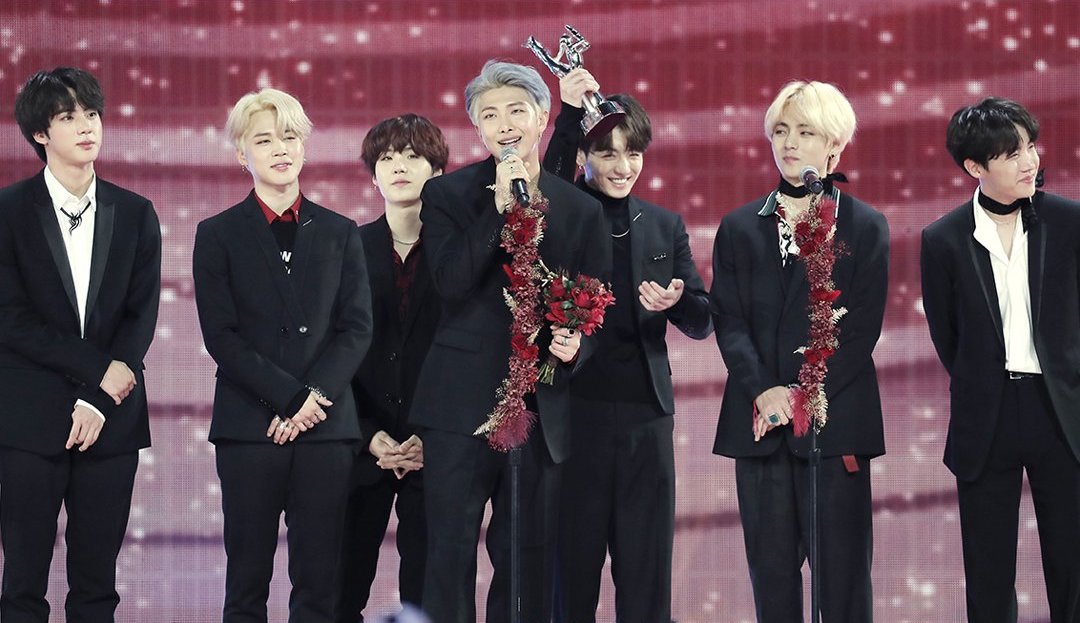 Going off of RM’s speech about BTS’s name, Jungkook said, “RM said that BTS’s name was really embarrassing at first, but I entered our agency because of BTS. Our group name feels really natural to me. We never thought that we would become singers who receive Daesangs like this, but I do think we had some kind of belief that we would succeed. We were confident that we would. I feel like I’ve spent every year happily because I’ve been able to form a good connection with each and every ARMY. I’m also looking forward to 2019, and I want to continue moving forward with everyone, happily, in 2019 as well. I continue to leave BTS in your hands.”

Congratulations to BTS! Check out their encore of “IDOL” below, as well as their performances during the show here.

BTS
33rd Golden Disc Awards
How does this article make you feel?