Watch: Sunmi Has A Blast Backstage With Chungha, Lee Dae Hwi, And Seulgi

The footage was taken backstage at the 2018 KBS Song Festival, where Sunmi teamed up with Lee Dae Hwi and Seulgi to perform her hit song “Heroine.” Lee Dae Hwi is well known as a “successful fan” of Sunmi, while Seulgi and Sunmi became close friends recently after being matched together on the reality show “Secret Sister.”

In the video, Sunmi first played charades with her manager and other staff members, with less than stellar results as they were unable to guess that she was trying to get them to guess the film “Veteran.” She then got a visit from Chungha, another of her “successful fans” who has become her friend, who had just finished rehearsals for the festival.

Sunmi tried out an earlier charades clue on Chungha, who immediately guessed that she was trying to act out “Mummy” but didn’t know the Korean word for it. They both laughed when Chungha tried to call a mummy a “Bandage Person” in Korean. 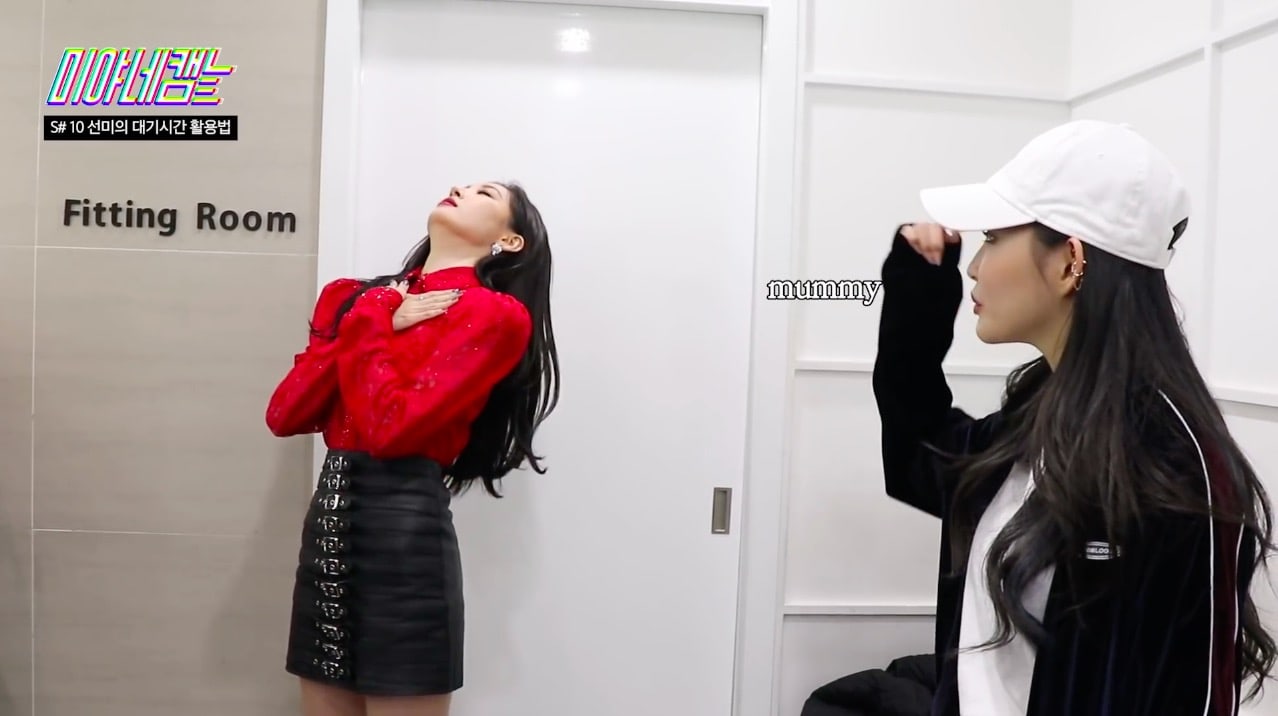 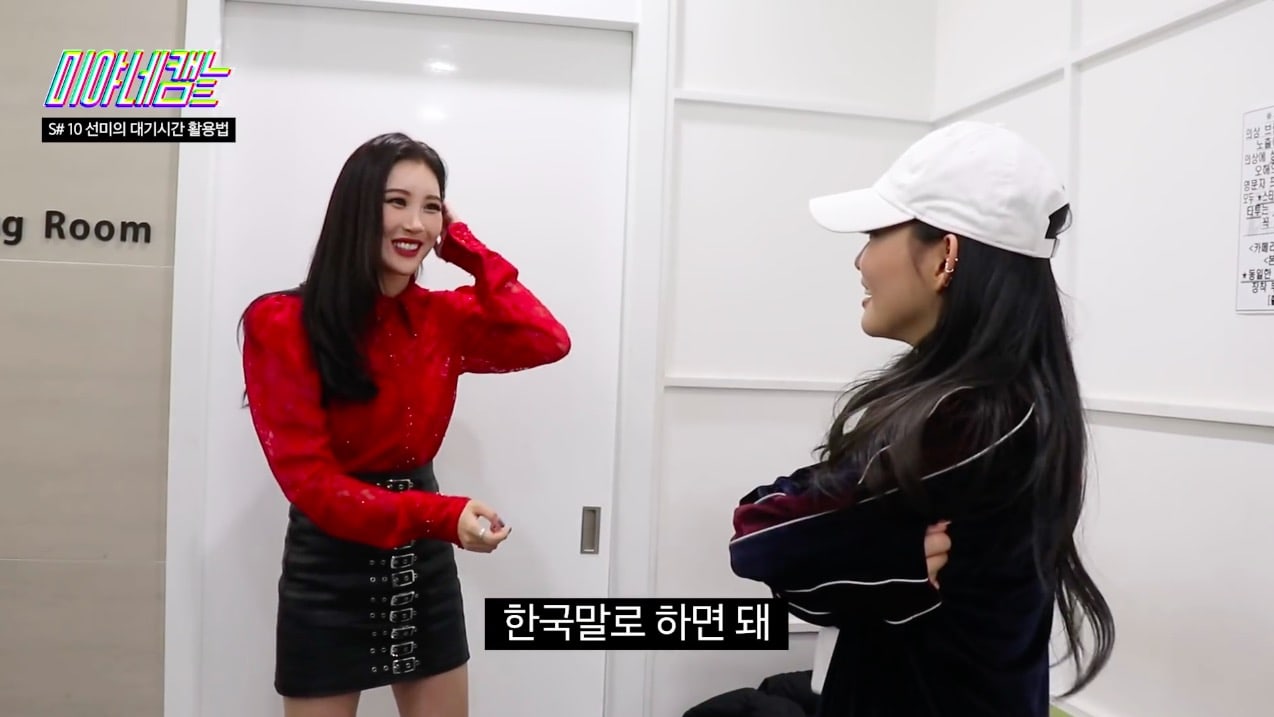 For the next clue, Sunmi pretended to be riding a broomstick, and Chungha immediately guessed “Harry Potter!” The pair were thrilled and hugged to celebrate that she got it right.

Chungha then took a turn of her own, going to a door and turning the knob before looking back at Sunmi. After only a moment, Sunmi excitedly guessed that she was acting out the recent film “Door Lock,” and they celebrated again. Sunmi then said to the camera, “Please show a lot of love for Chungha’s ‘Gotta Go,’ which comes out on January 2 at 6 p.m.” before they promised to see each other the next day.

In the next clip, Lee Dae Hwi happily entered the frame while saying the name of the show, “‘Miya’s Cam’!” He also got to take a turn playing charades with Sunmi, but is totally stumped by her clues. Eventually one of the staff figured it out and yelled “‘Pirates of the Caribbean’!” 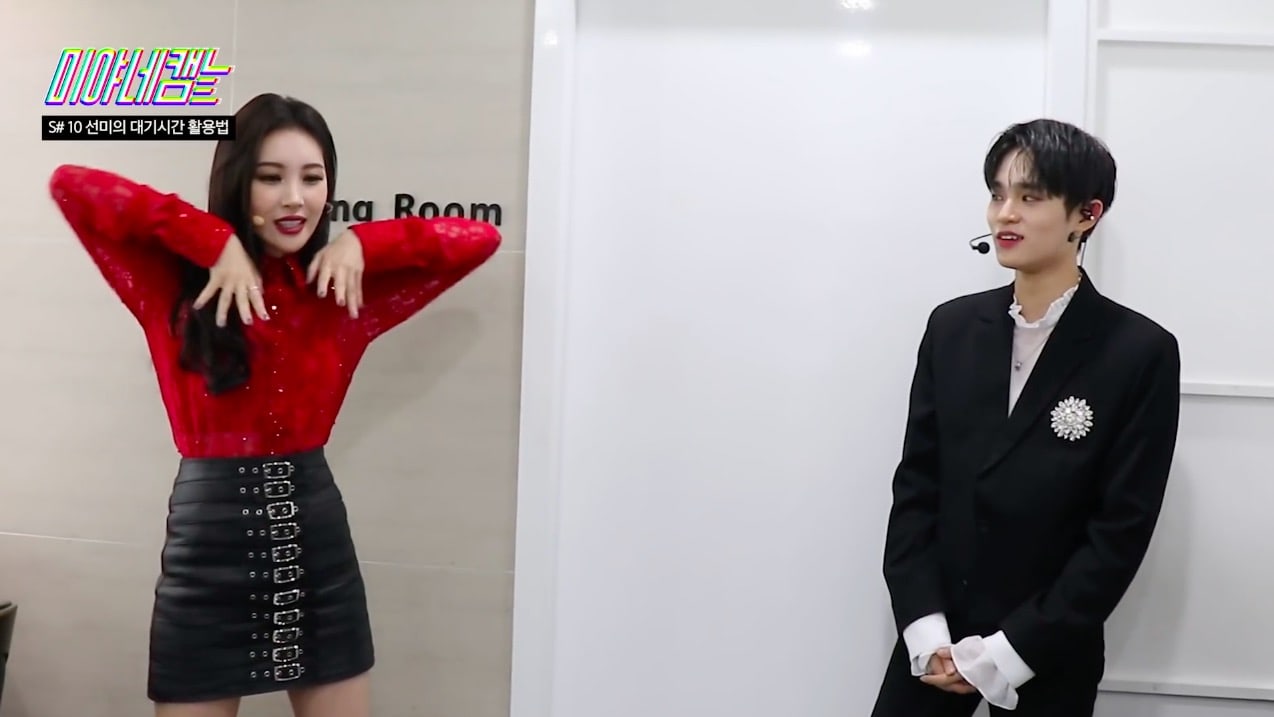 Everyone burst out laughing as Sunmi protested because Lee Dae Hwi was supposed to be guessing. “I couldn’t have guessed it,” Lee Dae Hwi assured them. “I haven’t seen that.” The others looked shocked by this and another staff member said, “There’s such a big age difference.” Lee Dae Hwi was born in 2001, while the first film in the series came out in 2003. 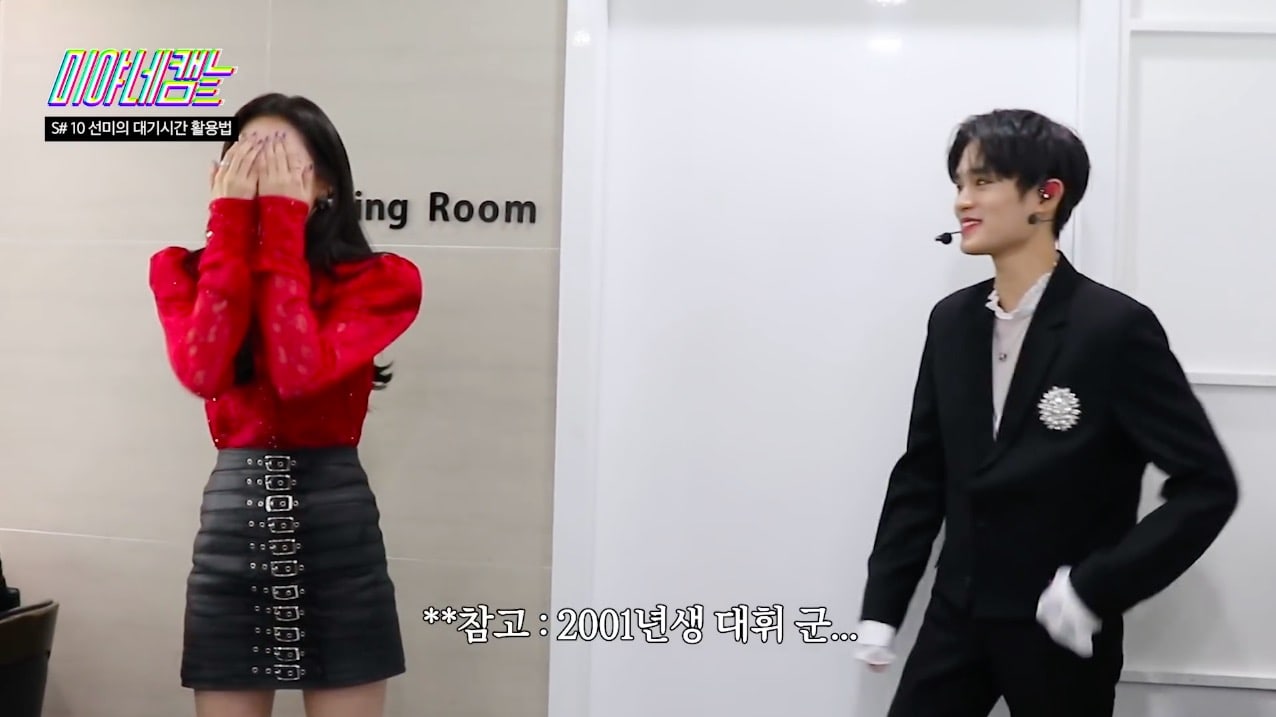 The pair then talked about their collaboration performance, and shared that the trio all had red highlights in their outfits, including Lee Dae Hwi’s in-ear pieces. Sunmi then mentioned that there’s a part in their choreography where the female dancers get up close to Lee Dae Hwi.

Lee Dae Hwi clarified, “They’re not really touching me though! It just looks like that. I asked them to do that; the dancers haven’t done anything wrong.” Sunmi laughed and said, “Thank you!”

Later on in the clip, Seulgi and Chungha both joined Sunmi backstage in the dressing room, and it was Seulgi’s turn to try to guess Sunmi’s charades clues.

Sunmi acted out the “Pirates of the Caribbean” character Captain Jack Sparrow stumbling around drunkenly, and Seulgi immediately guessed correctly, shocking and impressing everyone. Sunmi then tried out some more clues on Seulgi, and she quickly guessed them all right! 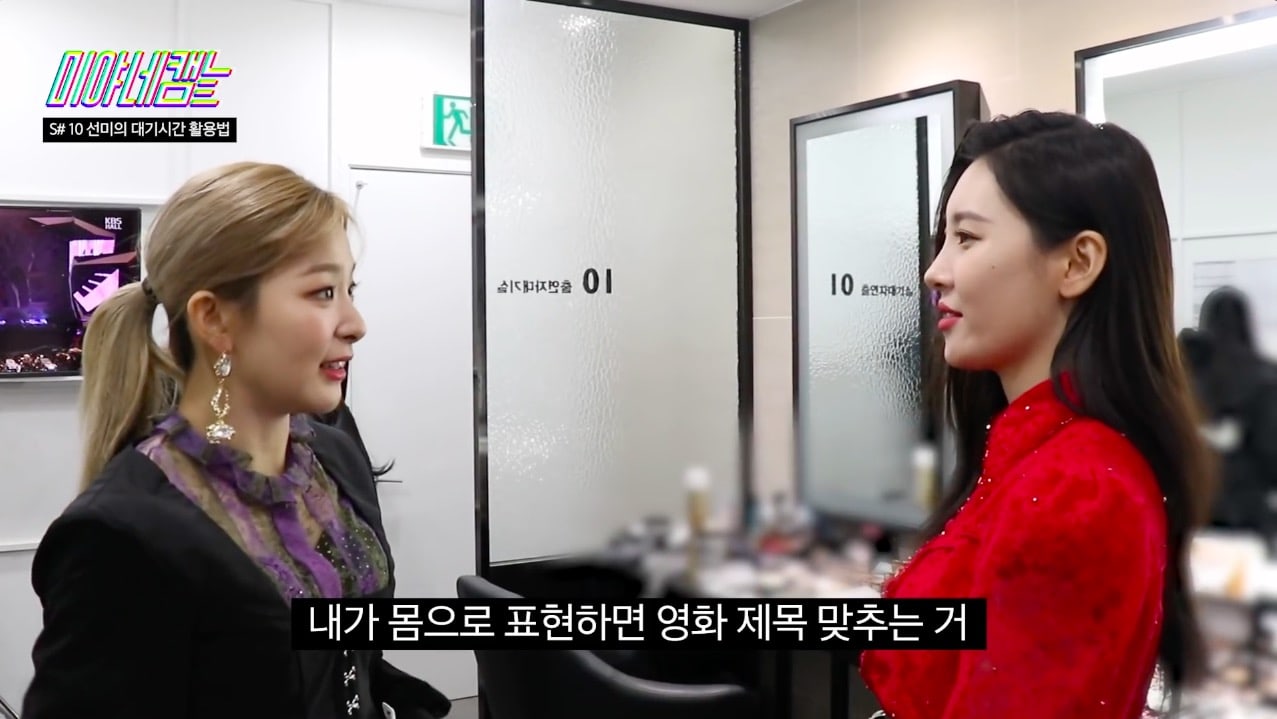 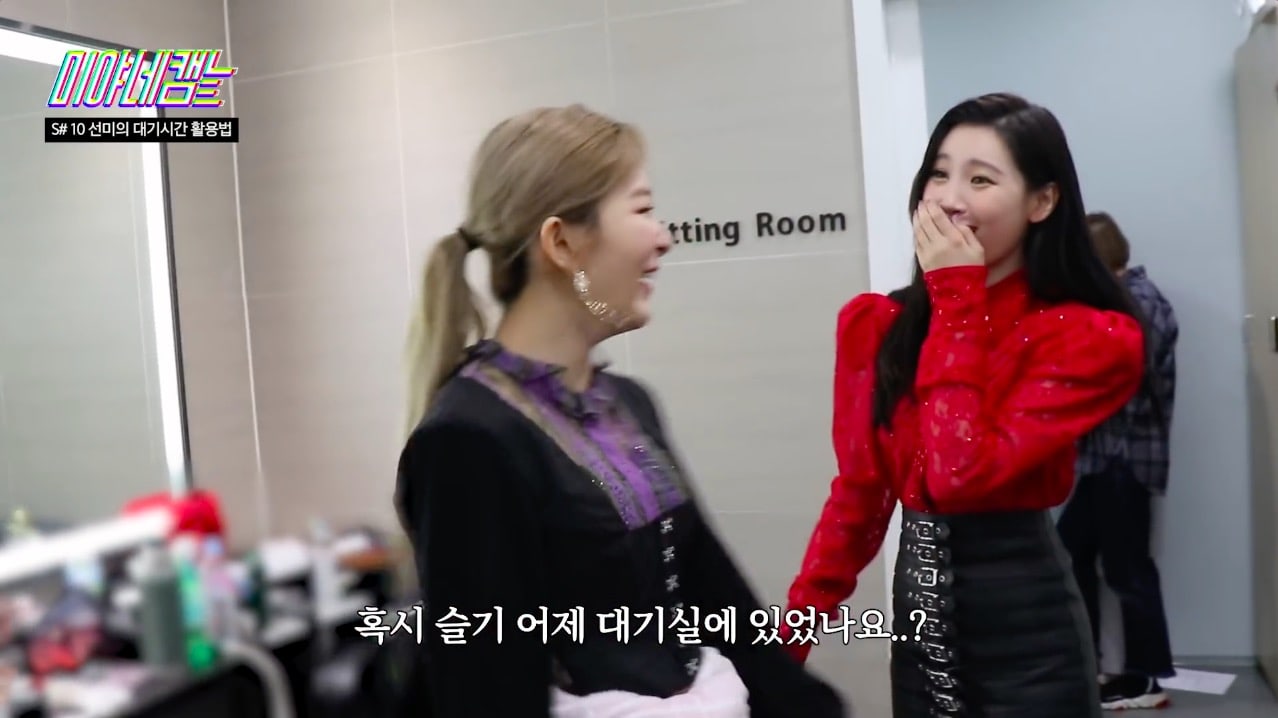 Check out the behind-the-scenes clip here:

Watch the 2018 KBS Song Festival below!