Rookie boy group ONEUS are taking their first steps into the music industry!

On the afternoon of January 9, ONEUS held a showcase at the YES24 Live Hall in Seoul. This was ONEUS’s first showcase as a group commemorating the release of their debut album, “LIGHT US.”

ONEUS is made up of six members (Ravn, Seoho, Leedo, Keonhee, Hwanwoong, Xion) and is the first boy group to debut under RBW. RBW has thus far been known for bringing success to many of the talented musicians under its care, but this is the first time the company has ventured into promoting a boy group, thus raising expectations as to the success of ONEUS.

The name ONEUS has two meanings. One is that the members came together by gathering strength from every one of their fans. The other meaning symbolizes ONEUS’s mission to bring together regular people who will work side-by-side to create a united world.

Their debut album “LIGHT US” introduces the kind of music ONEUS will be making, which is said to be born through “the light that people will shine on ONEUS.” “LIGHT US” and the title song “Valkyrie,” also holds the meaning of shining light on darkness.

The title song “Valkyrie” begins with a brilliant guitar riff that spreads out into a heavy-duty sound infused with an impressive hip-hop element. 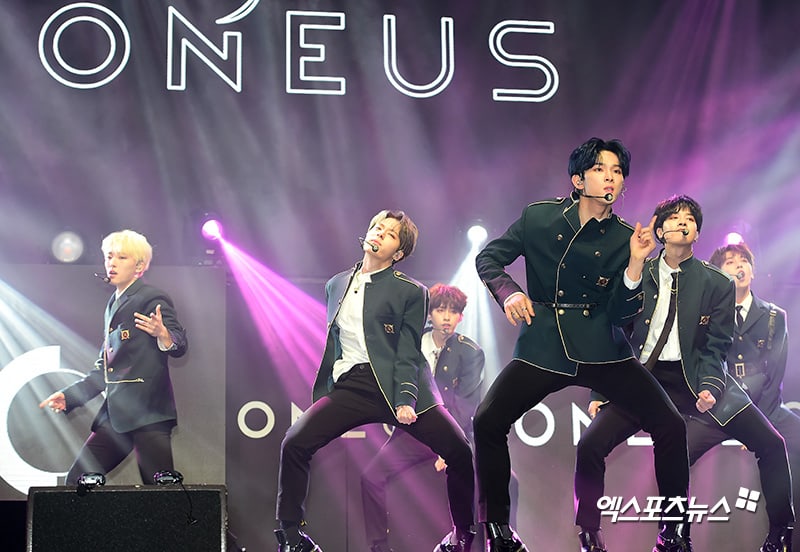 During the showcase, Hwanwoong commented, “Since November 2017, I experienced going on stage and busking around six times because of the “I Will Debut” project. It is thanks to these real-life experiences that I could gain confidence in myself today.

The oldest member, Ravn, stated, “I am happy to have been able to debut with the members that I have been training so hard with so far. My real name is Kim Young Jo, but I’m happy because it feels like I was born as Ravn. I am looking forward to the day I get to greet people as Ravn. I would be grateful if you took the time to watch all six of us slowly grow and develop.” 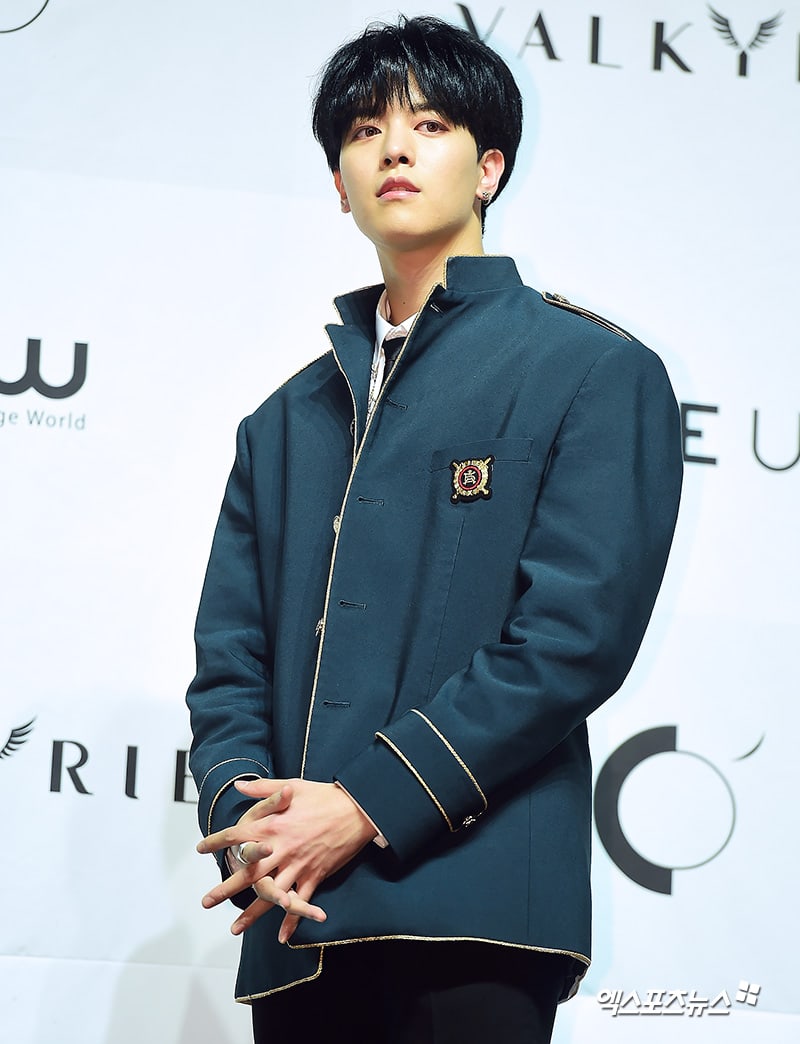 As mentioned above, the members of ONEUS were part of a project titled “I Will Debut” back in November 2017. It is through this project that the members made themselves known and gained experience in the music field. Member Keonhee talked about this project and said, “The biggest meaning of this project is that it allowed us to start out as the “RBW Boys,” to gather as the six members that we are today, and it gave us our group name, ONEUS. It also became an opportunity to watch the six of us grow. I think that through the busking and performances we did as part of the project, we were able to gain real-life experience and form the basis for us to get used to being on stage.” 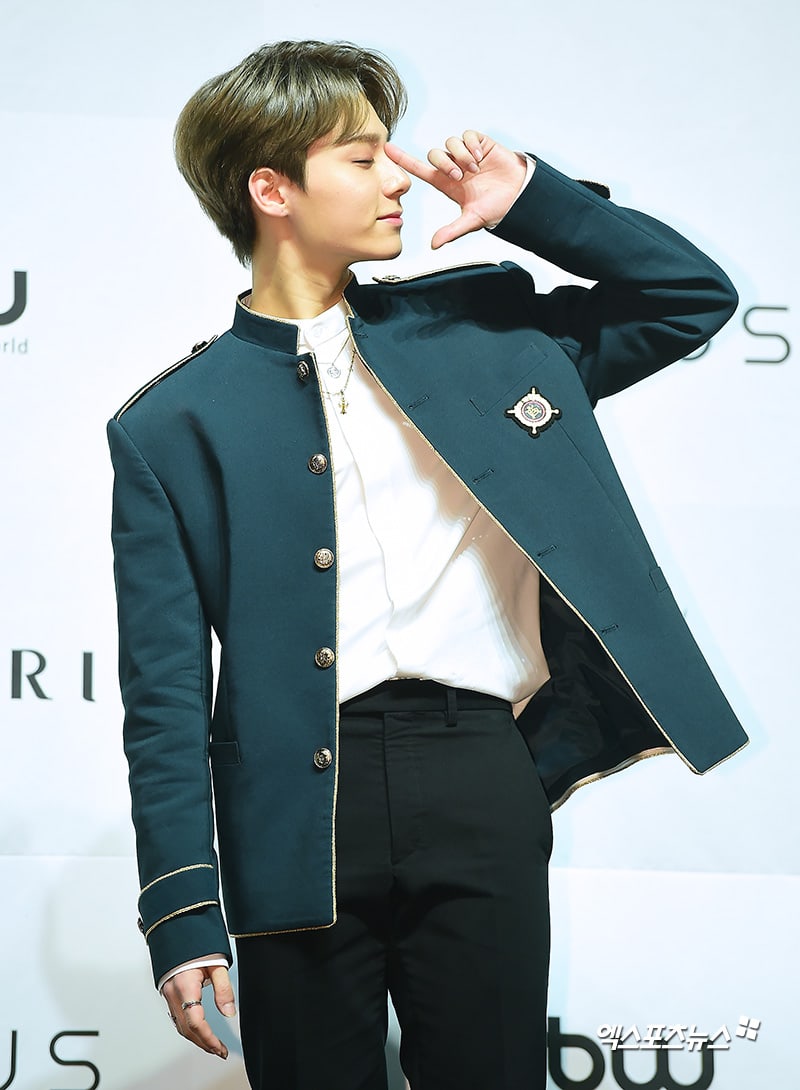 There had already been a lot of expectation built up towards ONEUS’s debut since they are under the same label as MAMAMOO. After the members were asked what they think of this, they promised that ONEUS will work hard to meet everyone’s expectations. Member Seoho also added, “MAMAMOO is very well known in the music industry, so I can’t say that we didn’t feel any pressure following in their footsteps. We decided amongst ourselves that we will work hard to build a name for ourselves as well. Whenever we ran into MAMAMOO at the company, they always gave us a lot of support.”

Keonhee then also responded, “One time, I went to drink water while practicing and I ran into MAMAMOO, who gave me words of support. They gave me a lot of good energy. Back then I was shy so allI could tell them was thank you, but I would like to use this opportunity to become a great artist like MAMAMOO.” 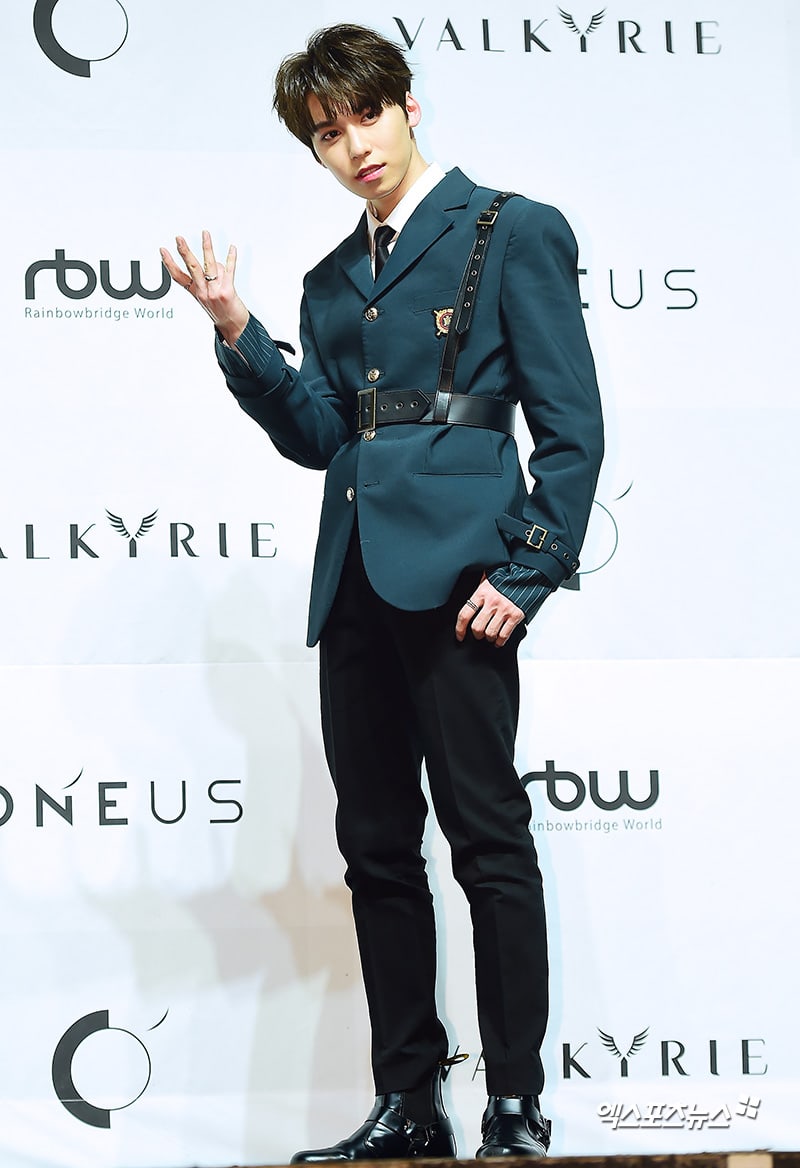 Member Hwanwoong was asked what kind of nickname he wants ONEUS to gain, to which he stated, “I wish we would gain the title of ‘rainbow group.’ Just like how a rainbow combines various colors to make something beautiful, I hope that we are able to show a positive image by combining each member’s individuality.”

Leedo was also asked the same question as Hwanwoong, to which he said, “I hope we get called world idols in the future because I hope that we become a team that creates a united world.”

ONEUS members Keonhee, Hwanwoong, and Seoho have already made their presence known prior to their debut by appearing on “Produce 101 Season 2.” However, it took them quite a long time to officially debut. Hwanwoong opened up about this during the showcase and said, “It would be a lie if I said that I wasn’t jealous of those who had already debuted. But I learned about my shortcomings through the show and practiced hard to show a more perfect version of myself when I debuted.”

Keonhee added, “It would be a lie if I also said that I wasn’t jealous of those who debuted before me. Although, I felt more proud that friends that I hung out with had finally debuted. I actually called my ’98-liner friends from ‘Produce 101 Season 2’ like Kim Dong Han, Lee Jin Woo, Lee Kwang Hyun, and Kim Dong Hyun first and congratulated them on their debuts without them even having told me that they were going to debut. It was thanks to those feelings from when I saw friends with the same dream as me debut that I was able to prepare harder for my own debut. We are actually holding a fan concert after the showcase is over and my 1998 liner friends said that they were going to come. I wanted to say thank you to those friends, who offered to come before I even asked them to.” 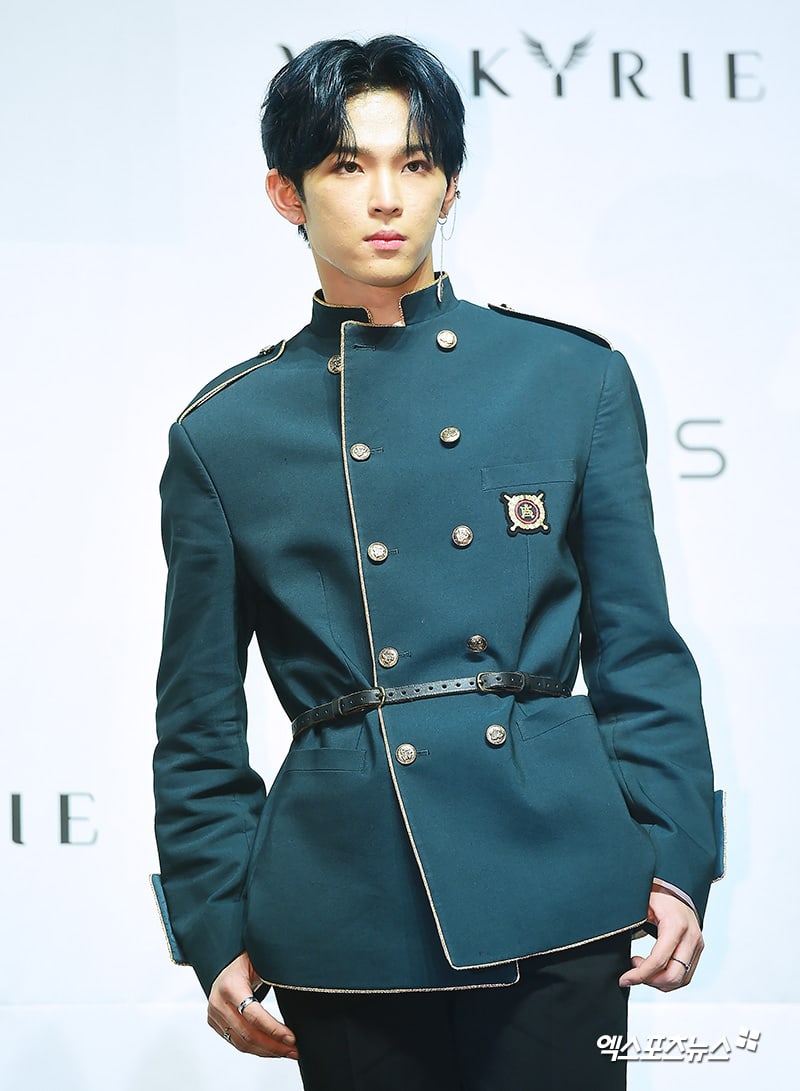 When asked if they got any advice from their CEO Kim Do Hoon, Keonhee responded, “He told us not to dwell on rankings. He told us that if we just promoted with a relaxed mind and without hanging our happiness on being number one, then good results will come to us.”

Another rookie boy group called VERIVERY debuted on the same day as ONEUS. Member Ravn commented, “I head that it’s a very special thing for two groups to debut on the same day. I’m happy to have gained strong colleagues such as VERIVERY. I was once a trainee with VERIVERY’s leader. I think I would be glad to see him if we met at a broadcasting station.” He continued, “Our six ONEUS members have different visuals, talents, and images to VERIVERY. So I feel like if we were to come together as one, then that would produce a very colorful and fresh image.”

Keonhee also added to the conversation and said, “We actually go to the same salon as VERIVERY. It’s still a bit awkward between us so I haven’t been able to say hello to them first. I hope we become good colleagues while promoting together.” 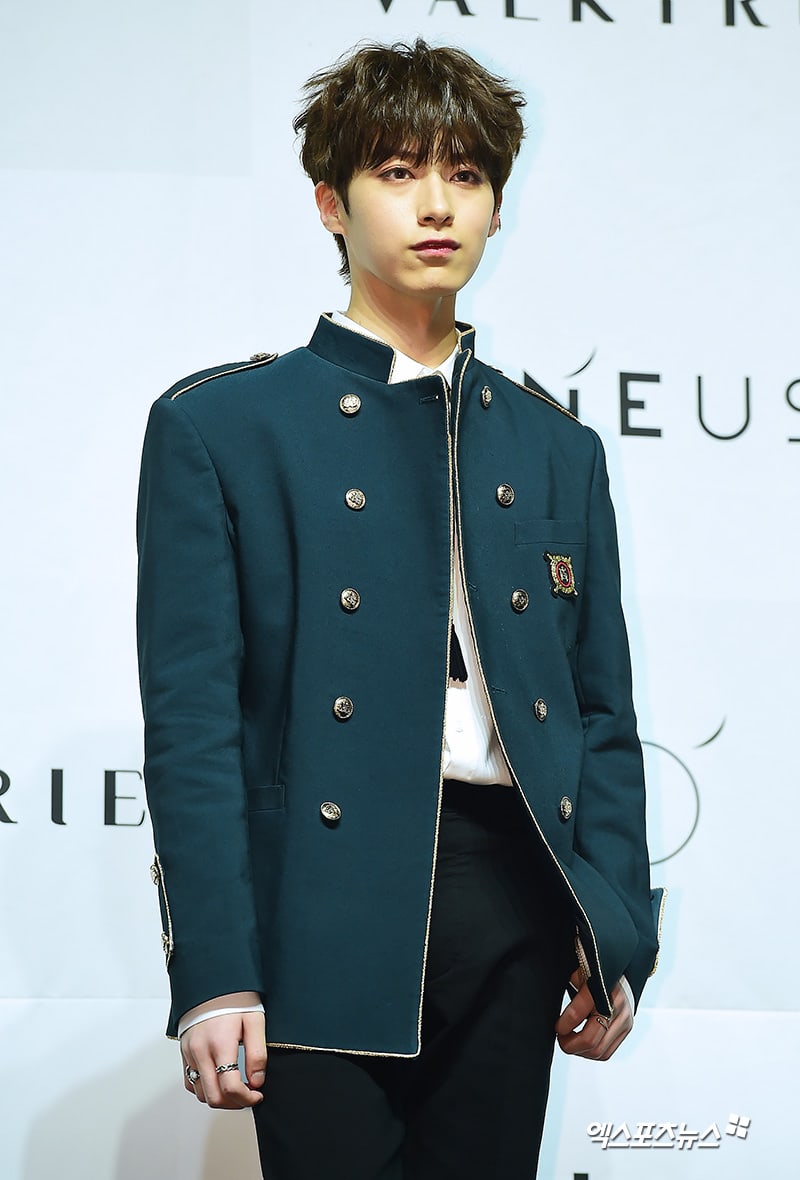 Xion was asked how he felt about debuting before his younger twin brother Son Dong Myun, to which he answered, “I was practicing for the last time yesterday, and I saw that my brother had put vitamins, painkillers, and cologne on my bed. He even called me in the practice room to support me and sent me a wreath. I am very grateful to him.”

Afterward, ONEUS expressed their wishes to spread their group’s name and become the upcoming rookie kings. Keonhee stated, “Since this is what we dreamt about for so long, I want to show everything without holding back. I’m satisfied to have been able to show my dream. This is just the beginning for us, so my goal is to spread the name ONEUS. One big dream that the members and I discussed once is what it would be like if we won the rookie award by the end of this year.”