“2 Days & 1 Night” PD Opens Up About Taking Over, Changes To The Show, And More

Winds of change are blowing through “2 Days & 1 Night.” Not only has comedian Lee Yong Jin joined the show as an intern, but producing director (PD) Yoo Il Yong, who led the show for the past two years, has left the show. Replacing him is PD Kim Sung.

PD Kim Sung has been with “2 Days & 1 Night” for the past seven years. Though he stepped out for one year to work on “Immortal Songs,” he soon rejoined “2 Days & 1 Night.” As he took the helm of the show, he shared, “I’m going to bring alive the natural mentality of wild road variety.”

When asked if he felt excited or pressured when he had received the offer to be the head PD, he answered, “It wasn’t a great feeling of happiness. However, ‘2 Days & 1 Night’ is about continuing on when the situation goes in unexpected directions. It felt like my life was also going in an unexpected direction. I decided to not be afraid and to accept it.” He added that because he had been with the show for a long time, he hadn’t felt any big psychological changes, and that he also could depend on former “2 Days & 1 Night” PDs Yoo Ho Jin and Yoo Il Yong.

Kim Sung elaborated on some of the changes the show had made, such as the captions. He remarked, “‘2 Days & 1 Night’ has captions with its own traditional feel. However, we’re changing the designs. We’ve changed the font from Ming style to Gothic style, and reduced the many colors to just the colors of the logo. It may appear trivial, but from the perspective of a producer it’s a risk.” 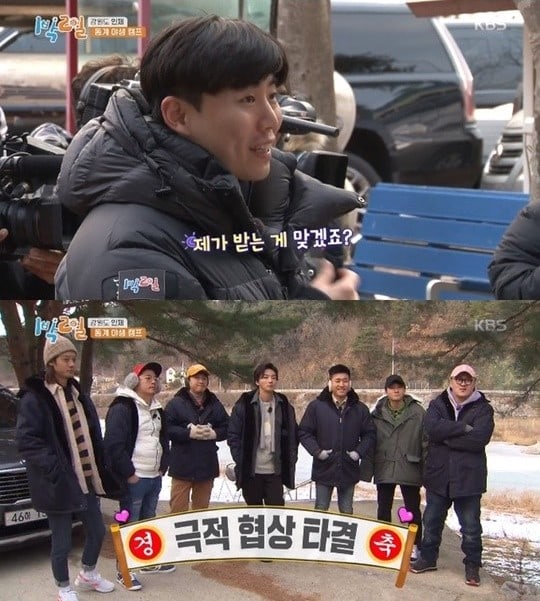 Kim Sung mentioned the new year’s first episode, where the CEO of KBS made an appearance. He explained that they hadn’t originally planned on filming it, but he had come and thought that he could give the members some strength.

The PD then commented on Lee Yong Jin joining the show as an intern. He remarked, “Lee Yong Jin hadn’t been particularly close to any of the original members, but he fit so well with them that we didn’t want to lose out on him. No matter who he is with among the six members, he doesn’t block their strengths and rather makes them come alive.”

He continued, “Currently, we’re taking the time to get to know each other so we gave him the title of intern. Since it’s a first for all of us, we don’t have a specific period of time or procedure. We told Lee Yong Jin that we should enjoy the confusion together. I think that the process is more important than the results. I believe that Lee Yong Jin, the members, the production staff, and the viewers will decide.”

When asked if Lee Yong Jin joining the show was due to one of the original members leaving, he firmly stated, “Absolutely not. The original six members all love the program and so none of the members will be leaving.”

On viewership ratings, Kim Sung remarked, “Viewership ratings are important, but the point is to make sure that [viewers] watch for the whole hour. Our ultimate goal is to become a variety show where the viewers are curious about the next week. i want to make it so that they want to watch ‘2 Days & 1 Night’ the next Sunday.”

The PD concluded by saying, “Our members know the shortcomings of our show very well. We can’t satisfy everyone, but we will work hard to prepare so that we will receive love from the most amount of people as possible.”

2 Days &amp; 1 Night
Lee Yong Jin
How does this article make you feel?