Love for EXO’s D.O. is all over Twitter on his special day!

D.O. (real name Do Kyung Soo) was born on January 12, 1993, and as soon as the clock struck midnight KST on his 26th birthday, fans began trending hashtags to celebrate him. #PrinceKyungsooDay took No. 1 on the list of worldwide trends, while #HappyKyungsooDay is also trending in the top 10. 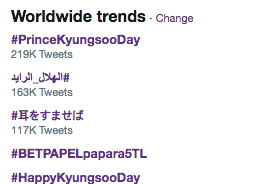 Check out some of the lovely tweets from fans below!

I will never let the tl forget abt birthday boy kyungsoo being so happy and cute while the fan was singing happy birthday song to him #PrinceKyungsooDaypic.twitter.com/awsTscHJQq

Happy Birthday to the adorable and incredibly talented Kyung Soo, he is phenomenal in everything he does. His squishy smile lights up the whole world. I wish him all the happiness and success in the world. Keep smiling and stay blessed. ❤️#HappyKyungSooDay #PrinceKyungSooDay pic.twitter.com/loWVjs01TU

January 12 is the brightest day among 365 in a year because that day the world celebrates the birth of the most amazing person, the best main vocal and actor on the whole world. Happy Birthday, Kyungsoo-ya ❤️#1월의기적_도경수 #HappyKyungsooDay #PrinceKyungsooDay pic.twitter.com/GM3CStbV8B

Happy birthday to our velvet voiced vocalist Do Kyungsoo. Thanks for blessing us all those years with not only your voice and acting, but also your genuine love and affection. Thanks for being our precious Do. ❤️?? #HappyKyungsooDay #PrinceKyungsooDay @weareoneEXO pic.twitter.com/0ofpG7KS4U