On January 13, Kwanghee got to meet Na Eun and Gun Hoo, who he became fans of after watching the show while serving in the military.

When the show’s writer asked Kwanghee if he was confident about the day ahead of him, he answered, “Of course. There is no problem. It’s not the first or second time I have been on ‘The Return of Superman.’ It’s probably my third or fourth appearance. I heard [the kids] asked for me. Don’t worry.”

Once he stepped into Na Eun and Gun Hoo’s house, she asked, “Uncle, what is your name?” He gave her four possible answers, and she chose the third name, which was Park Bo Gum.

Referring to her previous babysitters EXO’s Kai and Chanyeol, Kwanghee asked Na Eun, “Is that uncle [Kai] handsome or am I handsome?” Without any hesitation, Na Eun responded, “That uncle.” 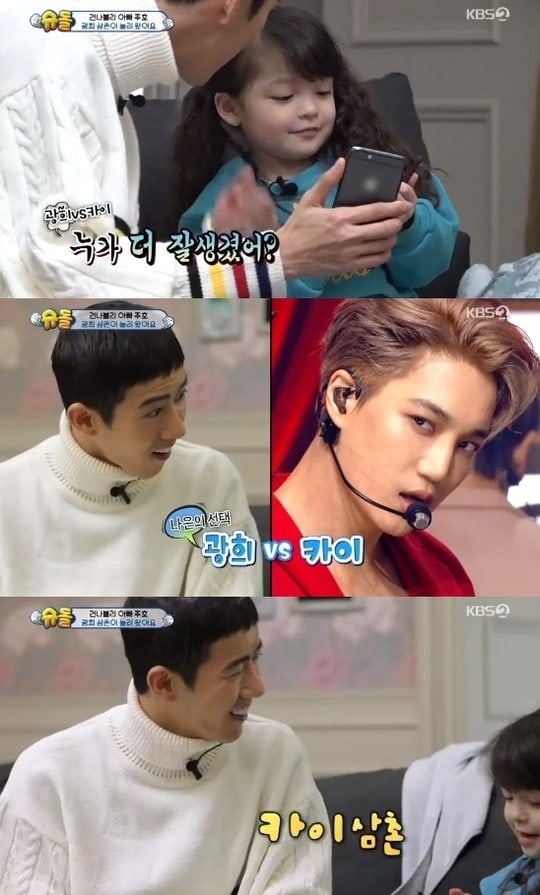 Kwanghee then gifted Na Eun a ukulele, and she struck a pose while playing the instrument. He commented, “You look like IU,” and Na Eun began to make the ukulele out of tune. Kwanghee tuned it again, but Gun Hoo continued to touch the instrument.

He soon began to look tired after the kids got on top of him after asking him to become an elephant. Kwanghee also fulfilled the request of Na Eun’s dad who asked him to take the kids to the dentist for a check-up.

Kwanghee explained, “I have my own secret for not being scared of the dentist. I’ll show you.” Although Na Eun looked nervous at the dentist, she was able to complete the exam thanks to Kwanghee.

Afterwards, the three of them headed to the jjimjilbang [Korean dry sauna] to relieve their exhaustion. Kwanghee gave Na Eun the task of buying eggs and sikhye [sweet rice drink], but she accidentally spilled the drink.

Instead of being startled, Na Eun calmly explained the situation to Kwanghee. After saying, “Na Eun did this,” she apologized and got tissues from the cafeteria employee to clean up the spill. 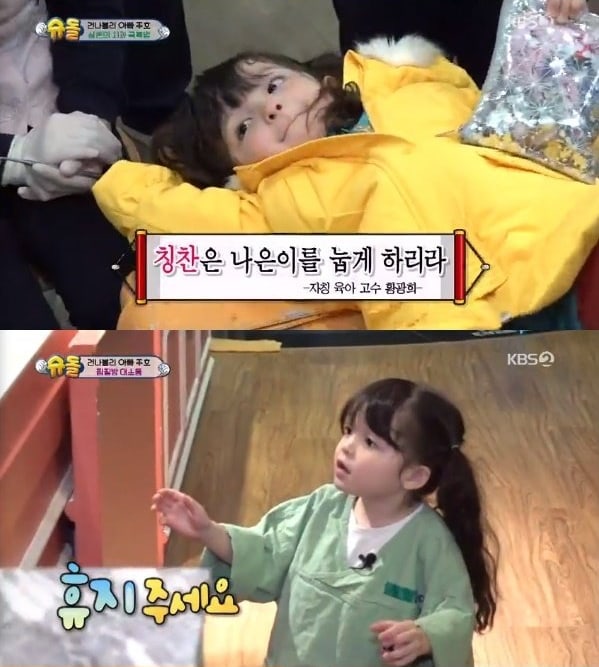 The Return of Superman
Kwanghee
ZE:A
Na Eun
How does this article make you feel?