Apink talked about their album promotions and future plans.

On January 15, the girl group appeared as guests on SBS PowerFM’s “Park So Hyun’s Love Game.”

During the broadcast, the members gave listeners a taste of their solo performances from their latest concert. Jung Eun Ji sang Queen’s “We Are the Champions” and “We Will Rock You,” Namjoo covered Lee Hyori’s “U Go Girl,” and Yoon Bomi performed Camila Cabello’s “Havana.”

Apink then spoke with the DJ while listening to b-side tracks from their newest album “Percent.” The members chose Yoon Bomi as the one who’s the best at playing hard-to-get because she replies late to messages.

Yoon Bomi explained, “I hear this a lot, so I’m making an effort to look at [messages] quickly.” On the other hand, Namjoo chose Chorong and Jung Eun Ji as the members who reply quickly to messages.

Speaking about “Enough,” which Chorong wrote the lyrics for, Hayoung said, “At first, I didn’t know [she wrote the lyrics]. Our members aren’t the type to make things obvious, so I also didn’t mention it.”

Namjoo added, “I really want to sing it at the next concert,” and Chorong explained, “It’s not soft like I had written it, but it’s ‘girl crush’ like our concept. I paid a lot of attention to each word in order to give it a strong, confident feel.”

When asked about their diets, Yoon Bomi made everyone laugh by promoting her YouTube channel. She said, “There are three to four types of diet secrets. Please like and subscribe while watching.” About the type of content she would post if she were to start her own channel, Son Naeun answered, “I want to show my everyday life. I have never revealed it before.” 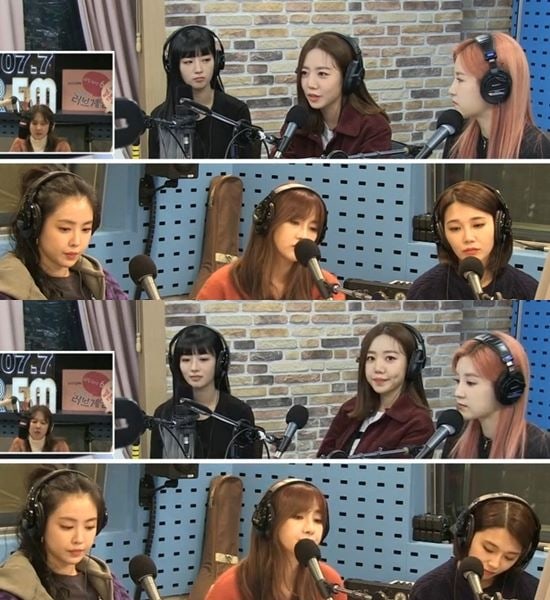 A listener asked Yoon Bomi if she had gotten close with MAMAMOO’s Moonbyul like she had hoped. Yoon Bomi, Moonbyul, TWICE’s Dahyun, and GFRIEND’s Eunha previously performed BIGBANG’s “Flower Path” together at 2018 SBS Gayo Daejeon.

Yoon Bomi replied, “I did a collaboration stage with Moonbyul at the end of the year. I tell her every day that we should go on a trip and go fishing, but we haven’t been able to go yet.” Chorong added, “She seemed startled because you asked her to go fishing the first time you met her.”

Yoon Bomi added, “[Moonbyul] is really busy so there isn’t much time to meet up with her.” The DJ said she hoped the two idols could go fishing together by the time their next album gets released, and Yoon Bomi replied, “I really hope I can tell you the story about our trip.”

Chorong continued, “We have plans to hold a concert in Japan. We’ll meet people we haven’t been able to meet yet in Asia.” Addressing their fans, she continued, “You must’ve been tired because it’s early, but we got through the show because you cheered for us.”

“It feels like yesterday when we announced our comeback, but the last week [of promotions] is already here,” concluded Jung Eun Ji. “Thanks to the support from our many fans, we were able to gather strength early in the morning and perform.”

Apink released their mini album “Percent” on January 7. Check out the MV for their latest title track “%%” here!