On the January 16 episode, Minhwan and former LABOUM member Yulhee visited her parents’ home located in the city of Siheung in Gyeonggi Province.

Minhwan became nervous when he saw his father-in-law, and Yulhee’s dad also looked awkward as he immediately got up to go to the bathroom. He introduced himself during the interview by saying, “I’m Yulhee’s dad and 46 years old [by Korean reckoning],” and the MCs commented that he was the youngest father-in-law to appear on the show.

Speaking about their first meeting, the father-in-law explained, “There’s a wall between us. In December of the year before last, my son-in-law came to say hello for the first time, and he said something unexpected about a premarital pregnancy. He hadn’t come to say hello, but to say that they would be getting married. I was speechless.” 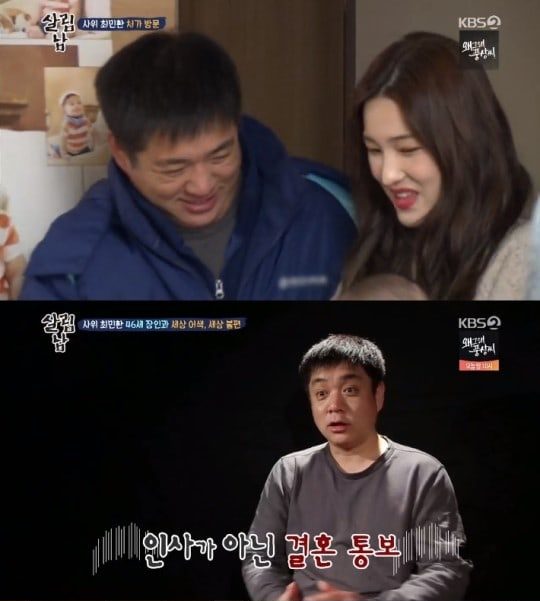 The FTISLAND member tried to break the ice by saying, “I wanted to have a drink with you, so I brought a bottle,” but Yulhee’s father replied, “I don’t drink though.”

Minhwan had previously put figurines he had collected in the living room of Yulhee’s parents’ home, and he asked if Yulhee’s younger brother Minjae enjoyed them. However, their mother told him that Yulhee’s father liked them even more.

Yulhee’s dad said, “I like figurines, especially Iron Man and Hulk. These days, I’m into cars but my wife won’t buy them for me.”

Although Minhwan and his father-in-law seemed to briefly bond over their love for figurines, Yulhee’s dad remarked in the interview, “It was only because we became immersed in talking about figurines. It’s still awkward and I still have some unresolved feelings.”

The family enjoyed a meal of chicken feet and Minhwan commented that it was new to him to be eating the dish as a meal instead of a side food with alcohol. During his interview, Minhwan revealed, “To be honest, I have a fantasy about drinking with my father-in-law.”

When Minhwan asked again if he wanted to drink with him, Yulhee’s dad agreed to it. He then stated in his interview that he only drinks a few times a year, and that his alcohol limit is three glasses.

As they drank, Yulhee’s dad brought up the topic of their marriage, and her mother said they shouldn’t talk about that while eating. “He should’ve been scolded the first time we met, but I was so shocked,” he replied. Yulhee’s mom said to the couple, “After you left, I got yelled at by your dad a lot for not telling him beforehand.” 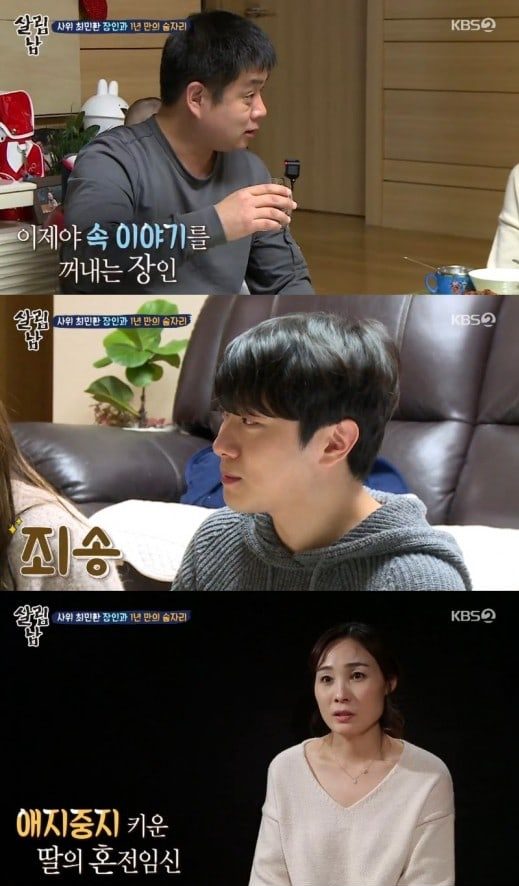 During her interview, Yulhee’s mother explained, “My daughter’s pregnancy was a huge shock for me too. I wondered how shocked my husband would be if he found out, so I couldn’t tell him because I was scared.”

In his own interview, her father said, “I couldn’t think. I should’ve been angry, but my mind went blank to the point where I couldn’t even be angry. I thought, ‘What should I do about this?’ I couldn’t think about anything.”

While they sat together, Minhwan said to his in-laws, “I actually would’ve felt better if I had gotten smacked, but I felt more like a criminal because you were so kind to me.”

Yulhee’s dad tried to find a suitable way to address Minhwan and looked awkward after saying “our son-in-law.” Yulhee suggested for him to call her husband by his name. Minhwan held out his hand and his father-in-law then held it. “It was difficult,” confessed Minhwan during his interview. “But I thought that I should get closer to him.”

Holding hands, they called each other “father” and “Minhwan,” and Yulhee and her mother clapped. 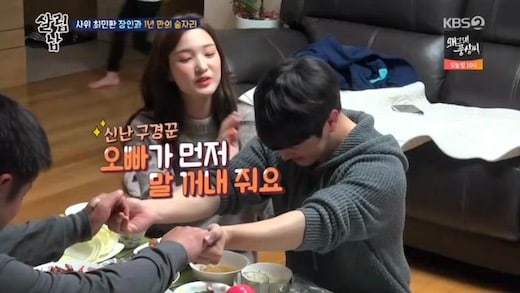