Lee Dong Wook Chose “Touch Your Heart” Because Of Yoo In Na, Talks About Working With Her Again

In an interview for tvN’s “Touch Your Heart,” which is premiering on February 6, Lee Dong Wook talked about why he chose the drama as his next project.

“Touch Your Heart” is about the romance that begins when Korea’s top actress, Oh Yoon Seo (Yoo In Na), meets the perfectionist lawyer Kwon Jung Rok (Lee Dong Wook) at a law firm.

Lee Dong Wook said his trust in the people that he would be working with was the reason why he chose the drama. “Director Park Jun Hwa gave me a lot of encouragement as he was pitching the role of Kwon Jung Rok to me. In particular, he told me to find comfort and happiness through ‘Touch Your Heart,’ and that comment really drew me in.”

The actor also said his co-star Yoo In Na played a role in his decision to join the drama. “One of the reasons why I chose this drama is because of my comfort and trust in working with Yoo In Na.”

On his reunion with Yoo In Na after their popular pairing as Reaper and Sunny in tvN’s “Goblin,” Lee Dong Wook said, “We’re going to try to show a different kind of chemistry [from ‘Goblin’].” But their experience working together is an advantage. “Thanks to Yoo In Na, from the table reading to now, we’ve been able film extremely comfortably. Yoo In Na is extremely meticulous, so she catches the things that I miss and helps fill in the holes. She’s helping me a lot.” 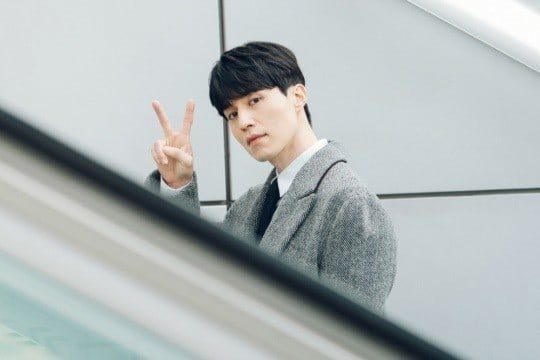 Describing his character in more detail, Lee Dong Wook said, “Jung Rok is lawyer who is perfectionist and has a prickly side to him. He has no interest in dating, and his line between his work and personal life is very clear. To others, he seems like a rigid person who cares about nothing but work, but in reality, he is a very warm person,” saying that his transformation in the drama will be fun to watch.

His character is only about a 30 percent match with his true personality, said Lee Dong Wook. “Jung Rok’s love for his work is similar to me, but I’m not as reticent as he is, so I think we’re synced about 30 percent.”

Lee Dong Wook said he’s working hard so that the legal dialogue of his character is well-delivered, and that his tone and reactions as his character are believable and accurate. “I think I’ll be able to show everyone something new.”